Bhogi (Kannada : ಭೋಗಿ,Telugu : భోగి,Tamil : போகி) is the first day of the four-day Pongal Festival (பொங்கல் திருவிழா) Makar Sankranti (ಮಕರ ಸಂಕ್ರಾಂತಿ, మకర సంక్రాంతి) festival. It falls on last day of Agrahāyaṇa or Mārgaśīrṣa month of Hindu Solar Calendar. According to the Gregorian calendar, it is usually celebrated on 13 January. It is a festival celebrated widely in Tamil Nadu, Andhra Pradesh, Telangana, Karnataka and Maharashtra. [2] [3]

On Bhogi, people discard old and derelict things and concentrate on new things causing change or transformation. At dawn, people light bonfires with logs of wood, other solid-fuels, and wooden furniture at home that are no longer useful. This marks the end of the year's accounts and the beginning of new accounts on the first day of the harvest on the following day. Like other festivals, Pongal and Lohri, Bhogi is also dedicated to Lord Indra [4] [5] [6] 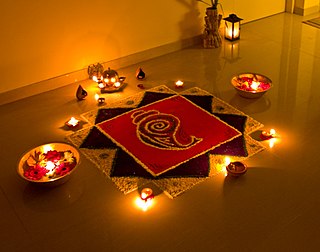 Diwali is a festival of lights and one of the major festivals celebrated by Hindus, Jains, and Sikhs. The festival usually lasts five days and is celebrated during the Hindu lunisolar month Kartika. One of the most popular festivals of Hinduism, Diwali symbolizes the spiritual "victory of light over darkness, good over evil, and knowledge over ignorance". The festival is widely associated with Lakshmi, goddess of prosperity, with many other regional traditions connecting the holiday to Sita and Rama, Vishnu, Krishna, Yama, Yami, Durga, Kali, Hanuman, Ganesha, Kubera, Dhanvantari, or Vishvakarman. Furthermore, it is, in some regions, a celebration of the day Rama returned to his kingdom Ayodhya with his wife Sita and his brother Lakshmana after defeating Ravana in Lanka and serving 14 years of exile. 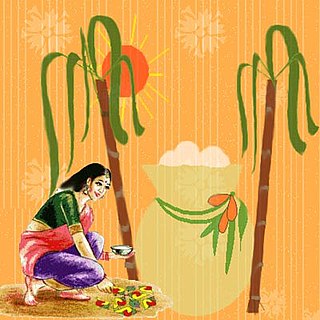 Pongal, is also referred to as Thai Pongal, is a multi-day Hindu harvest festival celebrated by Tamils in India and Sri Lanka. It is observed at the start of the month Tai according to Tamil solar calendar, and this is typically about January 14. It is dedicated to the Hindu sun god, the Surya, and corresponds to Makar Sankranti, the harvest festival under many regional names celebrated throughout India. The three days of the Pongal festival are called Bhogi Pongal, Surya Pongal and Maattu Pongal. Some Tamils celebrate a fourth day of Pongal as Kaanum Pongal.

Makara/Makar Sankranti or Uttarayan or Maghi or simply Sankranti, also known in Bangladesh and West Bengal as Poush Sankranti, and in Nepal as Maghe Sankranti, 'Sankranti' here means ‘transfer’, this day is considered as the transition day of Sun into Capricorn. Now the sun moves northwards in the Hindu calendar, dedicated to the deity Surya (sun), many native multi-day festivals are organised all over India. It is observed each year the day Sun enters the Capricorn zodiac which corresponds with the month of January as per the Gregorian calendar. It marks the first day of the sun's transit into Makara rashi (Capricorn).

Vaisakha is a month of the Hindu calendar that corresponds to April/May in the Gregorian Calendar. In Indian national calendar, Vaisakha is the second month of the year. It is the first month of the Vikram Samvat calendar, Odia calendar, Punjabi calendar, Assamese calendar and the Bengali calendar. This month lies between the second half of April and the first half of May. Regional calendars used in the Indian subcontinent have two aspects: lunar and solar. Lunar months begin with Chaitra and solar months start with Vaisakha Sankranti. However, regional calendars mark when the official new year is celebrated. In regions such as Maharashtra which begin the official new year with the commencement of the lunar year, the solar year is marked by celebrating Vaisakha Sankranti. Conversely, regions starting the new year with Vaisakha Sankranti, give prominence to the start of the lunar year in Chaitra. In Vedic calendar, it is called Madhav and in Vaishnav calendar, it is called Madhushudan month.

The Chitty, also known as the Chetty or Chetti Melaka, are a distinctive group of Tamil people found mainly in Melaka in Malaysia and Singapore, who are also known as the "Indian Peranakans" and have adopted Malay (mostly) and Chinese cultural practices whilst also retaining their Hindu faith and heritage. In the 21st century, their population stands at 2,000. The Chitty/Chetti community or Chettiar community, is from South India and are devout Hindus.

Karthigai Deepam, Thrikarthika or Karthikai Vilakkidu is a festival of lights that is observed by Hindus of Tamil Nadu, Kerala, Andhra Pradesh, Telangana, Karnataka and Sri Lanka. Tamil Nadu celebrates Karthigai Deepam as a traditional festival. It is a very ancient festival and is also celebrated in the neighboring states of Kerala, Andhra Pradesh and Karnataka. This festival is very important for Tamils all over the world. The full moon day of this Karthigai month is called Karthigai pournami. In Kerala, this festival is known as Thrikkarthika, celebrated to welcome Goddess Karthiyayeni Bhagavathi. In the rest of India, a related festival called Kartik Purnima is celebrated in a different date. It is celebrated in the name of 'Lakshabba' in the Nilgiris district of Tamil Nadu. The name of the festival born from the name of the god Kartikeya. In Tamil calendar the name of this month is Kārthikai (கார்த்திகை). In Telugu households of Andhra Pradesh, Telangana, Karthika Maasalu (month) is considered very auspicious. The Kartikai month starts on the day of Deepavali. From that day till the end of the month, oil lamps are lit every day. On Karthikai Pournami oil lamp with 365 wicks, prepared at home, are lit in Lord Shiva temples. Apart from that, on Kartikai Pournami fasting is observed till sunset, every day for the whole month. Swaminarayan Sampraday also celebrates this day with faith and fervor.[7] Vaisakhi, also pronounced Baisakhi, marks the first day of the month of Vaisakha and is usually celebrated annually on 13 or 14 April as the solar new year. It is additionally a spring harvest festival in the Punjab.

Lohri is a popular winter Punjabi folk festival celebrated primarily in Northern India. The significance and legends about the Lohri festival are many and these link the festival to the Punjab region. It is believed by many that the festival marks the passing of the winter solstice. Lohri marks the end of winter, and is a traditional welcome of longer days and the sun's journey to the northern hemisphere by Hindus and Sikhs in the northern region of the Indian subcontinent. It is observed the night before Maghi, also known as Makar Sankranti, and according to the solar part of the lunisolar Vikrami calendar and typically falls about the same date every year.

The Tamil calendar is a sidereal Hindu calendar used by the Tamil people of the Indian subcontinent. It is also used in Puducherry, and by the Tamil population in Sri Lanka, Malaysia, Singapore, and Mauritius. Tamil Nadu farmers greatly refer to this. It is used today for cultural, religious and agricultural events, with the Gregorian calendar largely used for official purposes both within and outside India. The Tamil calendar is based on the classical Hindu solar calendar also used in Assam, West Bengal, Kerala, Manipur, Nepal, Odisha, Rajasthan and Punjab 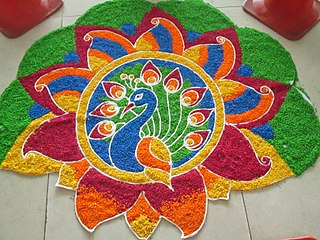 Puthandu, also known as Puthuvarudam or Tamil New Year, is the first day of year on the Tamil calendar and traditionally celebrated as a festival. The festival date is set with the solar cycle of the lunisolar Hindu calendar, as the first day of the Tamil month Chithirai. It falls on or about 14 April every year on the Gregorian calendar. The same day is observed elsewhere in South and South East Asia as the traditional new year, but is known by other names such as Vishu in Kerala, and Vaisakhi or Baisakhi in central and northern India.

Aadi Perukku commonly known as the Aadi monsoon festival and celebrated on the 18th day of the Tamil month of Adi. The festival pays tribute to water's life-sustaining properties. For the blessing of mankind with peace, prosperity and happiness, nature worship in the form of Amman deities are organized to shower Nature’s bountiful grace on human beings.pronunciation (help·info)

Mattu Pongal is the third day of the four-day Pongal festival. According to the Gregorian calendar it is celebrated on 16 January. Though the name of the festival is specific to Tamil Nadu, it is also celebrated in other southern Indian states such as Andhra Pradesh and Karnataka. Makar Sankranti is a festival that marks the start of northern declination of the Sun from the Zodiac sign of Sagittarius to Capricorn, which according to Tamil calendar usually falls on 14 January. 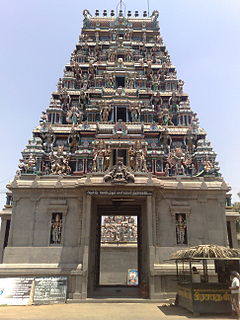 Kondathu Kaliamman Temple is an Amman temple located at Pariyur near Gobichettipalayam in Tamil Nadu, India. There are other temples, namely Sri Amarapaneeswarar Temple, Sri Adinarayana Perumal Temple and Sri Angalamman Temple nearby.

Pana Sankranti, also known as Maha Bishuba Sankranti, is the traditional new year day festival of Odia people in Odisha, India. The festival occurs in the solar Odia calendar on the first day of the traditional solar month of Meṣa, hence equivalent lunar month Baisakha. This falls on the Purnimanta system of the Indian Hindu calendar. It therefore falls on 13/14 April every year on the Gregorian calendar.

Rama Navami is a Hindu spring festival that celebrates the birthday of Shree Rama, the seventh avatar of the god Vishnu. Rama is particularly important in the Vaishnavite tradition of Hinduism. The festival celebrates the descent of Vishnu as the Rama avatar, through his birth to King Dasharatha and Queen Kausalya in Ayodhya. The festival is a part of the spring (Vasanta) Navratri, and falls on the ninth day of the bright half of Chaitra, the first month in the Hindu calendar. This typically occurs in the Gregorian months of March or April every year. Rama Navami is an optional government holiday in India.

Parimala Ranganathar Perumal Temples or Tiruindaloor is a Hindu temple dedicated to Vishnu, located in Thiruvilandur of Mayiladuthurai, a town in the South Indian state of Tamil Nadu. It is one of the Divya Desams, the 108 temples of Vishnu revered in Nalayira Divya Prabandham by the 12 poet saints, or Alwars. This temple is along Kaveri and is one of the Pancharanga Kshetrams.