Last updated March 14, 2019
Not to be confused with Biberach an der Riss.
in Baden-Württemberg, Germany

Biberach is a municipality in the district of Ortenau in Baden-Württemberg in Germany.

Villingen-Schwenningen is a town in the Schwarzwald-Baar district in southern Baden-Württemberg, Germany. It has 84,818 inhabitants.

Generaloberst, in English colonel general, was, in Germany and Austria-Hungary—the German Reichswehr and Wehrmacht, the Austro-Hungarian Common Army, and the East German National People's Army, as well as the respective police services—the second highest general officer rank, ranking above full general but below general field marshal. It was equivalent to Generaladmiral in the Kriegsmarine until 1945, or to Flottenadmiral in the Volksmarine until 1990. The rank was the highest ordinary military rank and the highest military rank awarded in peacetime; the higher rank of general field marshal was only awarded in wartime by the head of state. In general, a Generaloberst had the same privileges as a general field marshal.

This is a list of international organization leaders in any given year.

Riedlingen is a town in the district (Kreis) of Biberach, Baden-Württemberg, in the south-west of Germany. It is one of the destinations of the Upper Swabian Baroque Route. Riedlingen has approximately 10,000 inhabitants.

The Hagenbund or Künstlerbund Hagen was a group of Austrian artists that formed in 1899. The group's name derived from the name Herr Hagen, the proprietor of an inn in Vienna which they frequented.

Stuttgarter Kickers is a German association football club that plays in Stuttgart, Baden-Württemberg, founded on 21 September 1899 as FC Stuttgarter Cickers.

Leinzell is a village in the German state of Baden-Württemberg, in Ostalbkreis district.

The following is a list of players, both past and current, who appeared in at least one game for the New York Yankees franchise, including the 1901–02 Baltimore Orioles, and the 1903–12 New York Highlanders.

The Grosser Preis von Baden is a Group 1 flat horse race in Germany open to thoroughbreds aged three years or older. It is run at Baden-Baden over a distance of 2,400 metres, and it is scheduled to take place each year in early September. 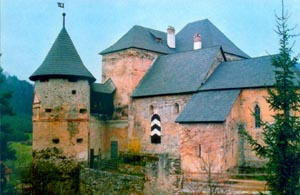 A Jugendburg, sometimes referred to in English as a youth castle, is a mediaeval castle in German-speaking countries that was converted during the 20th century into a public community centre or educational facility for young people. The sponsors of the original youth castles came mainly from the Wandervogel and Pfadfinder movement, or were at least linked to the youth movement.