Bill Lowrey was born on May 25, 1862 in Kossuth, Mississippi. He attended public school and the Blue Mountain Academy in Blue Mountain, Mississippi, graduating from Mississippi College at Clinton in 1887. During 1888-9 he was a student at Tulane University, New Orleans, Louisiana.

Kossuth is a village in Alcorn County, Mississippi, United States. The population was 209 at the 2010 census.

Blue Mountain is a town in Tippah County, Mississippi. The population was 670 at the 2000 census. It is the location of Blue Mountain College, a private Christian liberal arts college.

Lowrey was elected as a Democrat to the Sixty-seventh and to the three succeeding Congresses (March 4, 1921 - March 3, 1929), but was not renominated to the Seventy-first Congress (1929). He served as clerk of the United States Court for the Northern District of Mississippi 1929-1935.

Lowrey died in Olive Branch, Mississippi, September 2, 1947 and was interred in Blocker Cemetery.

Olive Branch is a city in DeSoto County, Mississippi, United States. The population was 33,484 at the 2010 census, up from 21,054 in 2000. Olive Branch is part of the Memphis Metropolitan Statistical Area, a region that consists of three counties in southwest Tennessee, five counties in northwest Mississippi, and two counties in eastern Arkansas. From 1990 to 2010 Olive Branch was the fastest growing city in the United States, with a growth rate of 838%. Along with other rapidly growing suburbs in DeSoto County, Olive Branch attributes most of its growth and development to the exodus of large numbers of middle-class families from central Memphis.

Blue Mountain College (BMC) is a private liberal arts college, supported by the Mississippi Baptist Convention, located in the northeastern Mississippi town of Blue Mountain not far from Tupelo. Founded as a women's college in 1873, the college's board of trustees voted unanimously for the college to go fully co-educational in 2005.

Perry Belmont was an American politician and diplomat.

James Alfred Pearce was an American politician. He was a member of the U.S. House of Representatives, representing the second district of Maryland from 1835 to 1839 and 1841 to 1843. He later served as a U.S. Senator from Maryland from 1843 until his death in 1862.

James William Good was an American politician from the state of Iowa, who served in the U.S. House of Representatives and the Cabinet of President Herbert Hoover as Secretary of War. He was a member of the Republican Party. 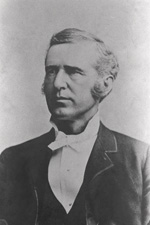 Camilo Olaviano Osías was a Filipino politician, twice for a short time President of the Senate of the Philippines.

William Vandever was a United States Representative from Iowa and later from California, and a general in the Union Army during the American Civil War.

The United States Assistant Secretary of War was the second-ranking official within the American Department of War from 1861 to 1867, from 1882 to 1883, and from 1890 to 1940. According to the Military Laws of the United States, "The act of August 5, 1882 authorizing the appointment of an Assistant Secretary of War was repealed by the act of July 7, 1884 the power conferred by the act of August 5, 1882 never having been exercised," indicating that the post was not filled between 1882 and 1883.

Byron Mac Cutcheon was an American Civil War officer, Medal of Honor recipient and politician from the U.S. state of Michigan. 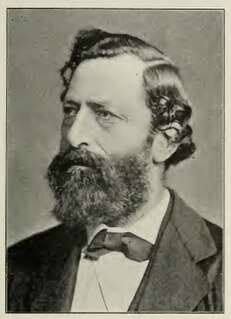 Henry Smith Van Eaton was an attorney, politician and military officer, reaching the rank of captain in the Confederate Army. He was elected from Mississippi's 6th congressional district as U.S. Representative, serving 1883 to 1887.

Milton Holmes Welling was a U.S. Representative from Utah.

Mark Perrin Lowrey was a Southern Baptist preacher otherwise known as the "Preacher General". He is known for being a Confederate brigadier general during the Civil War, for his works in the Mississippi Southern Baptist Convention, and for founding the Blue Mountain College.

Events from the year 1865 in the United States. The American Civil War ends with the surrender of the Confederate States, beginning the Reconstruction era of U.S. history.

Events from the year 1817 in the United States.