Duluth, Minnesota, hosted a professional football team called the Kelleys from 1923 to 1925 and renamed as the Eskimos during the two seasons of 1926 and 1927 in the National Football League. The team was put together by Kelley-Duluth Hardware Store owner M. C. Gebert with the help of Dewey Scanlon, a college graduate who played football at Valparaiso University in Indiana. After being a traveling team during most of their time as the Eskimos, they withdrew from the league after the 1927 season. 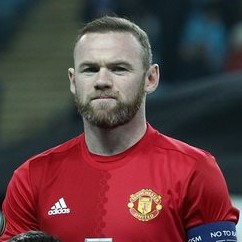 Wayne Mark Rooney is an English professional footballer who plays for Major League Soccer club D.C. United. He has played much of his career as a forward, and he has also been used in various midfield roles. He is the record goalscorer for the England national team and for Manchester United. At club level, he has won every honour available in English, European and Continental football, with the exception of the European Super Cup. Along with Michael Carrick, he is the only English player to win the Premier League, FA Cup, UEFA Champions League, League Cup, UEFA Europa League and FIFA Club World Cup. 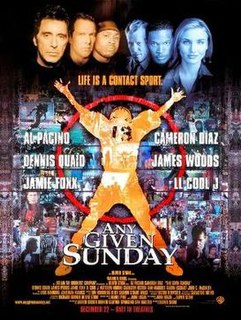 Any Given Sunday is a 1999 American sports drama film directed by Oliver Stone depicting a fictional professional American football team. The film features an ensemble cast, including Al Pacino, Cameron Diaz, Dennis Quaid, Jamie Foxx, James Woods, LL Cool J, Ann-Margret, Lauren Holly, Matthew Modine, John C. McGinley, Charlton Heston, Bill Bellamy, Lela Rochon, Aaron Eckhart, Elizabeth Berkley, Marty Wright, and NFL players Jim Brown and Lawrence Taylor. It is partly based on the novel On Any Given Sunday by famed NFL defensive end Pat Toomay; the title is derived from a line in the book that a team can win or lose on "any given Sunday", said by the fictitious coach Tony D'Amato. 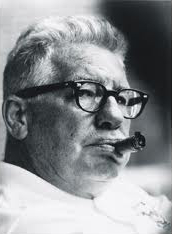 Arthur Joseph Rooney Sr., often referred to as "The Chief", was the founding owner of the Pittsburgh Steelers, an American football franchise in the National Football League (NFL), from 1933 until his death. Rooney is a member of the Pro Football Hall of Fame, was an Olympic qualifying boxer, and was part or whole owner in several track sport venues and Pittsburgh area pro teams. He was the first president of the Pittsburgh Steelers from 1933 to 1974, and the first chairman of the team from 1933 to 1988.

Daniel Milton Rooney was an American executive and diplomat best known for his association with the Pittsburgh Steelers, an American football team in the National Football League (NFL), and son of the Steelers' founder, Art Rooney. He held various roles within the organization, most notably as president, owner and chairman. 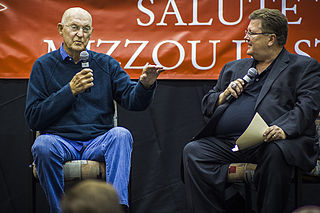 Adam Christopher Rooney is an Irish professional footballer who plays as a striker for National League club Salford City. He previously played for Stoke City, spent spells on loan at Yeovil Town, Chesterfield and Bury, was a regular first-team member for Inverness Caledonian Thistle, and played for Birmingham City and had a loan spell at Swindon Town. He played for Oldham Athletic before spending four-and-a-half seasons with Aberdeen.

John Rooney may refer to:

James Rooney is a former association football player. He was a member of the Australian 1974 FIFA World Cup squad in West Germany.

The Rooney family is an Irish-American family which, after emigrating from Ireland in the 1840s, established its American roots in Pittsburgh, Pennsylvania in the 1880s, and is known for its connections to the sports, acting, and political fields.

John Richard Rooney is an English professional footballer who plays for Barrow as an attacking midfielder.

The Pennsylvania Keystoners was the idea for an American football team thought up by then-Pittsburgh Pirates owner, Art Rooney, in 1939 to have a single National Football League franchise based in both Pittsburgh and Philadelphia. The team would play half of its home games in each location.

Benny Rooney is a Scottish former football player and manager.

Rooney is an Irish surname, an Anglicized form of the Gaelic Ó Ruanaidh meaning "descendent of Ruanaidh". It may refer to the following people:

Raymond Howard Kemp was an American football player and a charter member of the Pittsburgh Pirates football team. He was also the first African-American player in the team's history. In fact in 1933, he was the only African-American on the team and only one of two black players in the entire National Football League.

Wayne Rooney's Street Striker is a British reality television series that is broadcast on Sky1 and in high definition on Sky1 HD. The prize for the winners of the competition have included trips to a football training camp in Brazil and South Africa for the 2010 FIFA World Cup Final.

The FA England Awards is an award ceremony hosted by The Football Association. The inaugural edition took place on 3 February 2003.

The J.P. Rooneys were an independent semi-professional American football team, based in Pittsburgh, Pennsylvania. The team was founded by Art Rooney, who is best known for being the founder of the Pittsburgh Steelers of the National Football League, and this team is considered to be the unofficial beginnings of the modern-day Steelers. The team played at Exposition Park and reportedly had up to 12,000 people in the stands at times.

The Art Rooney Award is given annually by the National Football League (NFL) in recognition of outstanding sportsmanship on the playing field. Established in 2015, the award is named in honor of Art Rooney, the founding owner of the Pittsburgh Steelers and a member of the Pro Football Hall of Fame.

The Pennsylvania Polka refers to a series of moves affecting the Philadelphia Eagles and Pittsburgh Steelers franchises in the National Football League (NFL) from 1940–1941. The name derives from a popular song composed by Zeke Manners and introduced in 1942 by The Andrews Sisters in their film Give Out, Sisters.