William Bestwick (24 February 1875 –2 May 1938) was an English cricketer who played for Derbyshire between 1898 and 1926. He was a medium-fast bowler who took over 1,400 wickets for the county,including 10 in one innings. From his wild temperament and reckless behaviour,he was known as a "bad boy" of cricket.

Bestwick was born at Tag Hill,Heanor,Derbyshire. He was the son of a miner and started working at Coppice Pit at the age of 11. He debuted for the Derbyshire team in 1898,as a professional while still working in the mine in winter. He is one of the only two bowlers to have hit ten wickets in a single innings for Derbyshire,a feat he achieved in June 1921,the other being five-time Test cricketer Tommy Mitchell. He was a true tailender batsman,who never averaged above eight with the bat in a single season for Derbyshire and did not once reach twenty in his last two hundred and eighty first-class innings,a run of batting failures equalled only by Eric Hollies between 1939 and 1954. This extreme weakness as a batsman (and also in the field) was probably why Bestwick never managed to gain a single Test cap.

Though Bestwick finished with the second-weakest average of his debut season,he proved himself capable with best bowling figures of an expensive but successful 4–163. While Derbyshire were bottom of the 1899 Championship table,the team were looking for an upturn in fortunes. A season average of six would not initially indicate this,however,thanks to the best single batting performance of his career,an innings of 39 against Surrey,Derbyshire bested Leicestershire and the winless Hampshire in the season's championship table.

Derbyshire played host to a team of South Africans in 1901,as the young Test nation played a series of eleven warm-up matches against English county sides prior to a Test series against the English cricket team. However,a publicity boost such as this only served to panic an ever-spiralling Derbyshire team into once again finishing in bottom place in the table. The following year,1902,was slightly more encouraging for Derbyshire,as,boosted by the appearance of long-time Warwickshire player Thomas Forrester,after three years out of the game,Derbyshire finished in their highest position since the beginning of Bestwick's career,finishing the season in tenth place. Bestwick bowled very well in a summer when pitches were almost always too wet to suit a bowler of his pace and was probably the second-best fast bowler in county cricket after William Lockwood.

In 1903,Derbyshire finished twelfth,though the following season saw Derbyshire back up to tenth place,and Bestwick with one more ten-wicket match,beating out left-hander John Hulme,who had the best single-innings tally of the team with 8/52,but no ten-wicket haul to speak of,though Arnold Warren was to hit two similar hauls and outscore Bestwick with the bat,courtesy of a brace of half-centuries. Thanks to another South African tour,Derbyshire got full-on experience of an international side during the 1904 season,and Bestwick was to hit an average of under 30 once again,as he and Warren spearheaded the Peakites' bowling attack,as the two players missed just a single game of the eighteen Derbyshire played throughout the season between them.

1905 was very little of a rise before a fall,as Derbyshire handed debuts for fifteen players in first-class cricket,ten of whom played fewer than five first-class matches,as Derbyshire finished with a −64% winning percentage,the third worst of the season.

Bestwick was noted for his unpredictable nature and his alcoholism after his wife left him in 1906,and this adversely affected his cricketing career. In January 1907 after a night's drinking,he killed a man named William Brown in a fight,although the inquest at the pub the next day brought in a verdict of 'justifiable homicide.' [1]

The late 1900s saw more painful times for Derbyshire as Derbyshire finished second bottom of the table. In 1909,Bestwick played in his final County Championship game for nearly ten years. He was sacked and went to South Wales,where he remarried and played for Glamorgan in the Minor Counties Championship in 1914. [2]

In 1919 44-year-old Bestwick was invited to rejoin Derbyshire in a revitalised Derbyshire team,and with Arthur Morton as his minder. The side was led at various times by captains Richard Baggallay,Guy Jackson and John Chapman,the team's three-season captain before the outbreak of the Great War,the eldest of the Hill-Wood brothers,Basil,Derbyshire finished in ninth place.

Bestwick was practically blameless for Derbyshire's bottom-placing season of 1920,after playing just one game for the team. Despite being 45 years old at this time,he was still turning out regular appearances for a team whose appearances further up the table seemed indicative of a change in fortunes,until 1924 saw Derbyshire winless in 24 County Championship games and rooted to the foot of the table.

Beswick's son,Robert Bestwick,later served as a Derbyshire cricketer,father and son playing two games together during the 1922 season. Bestwick,aged fifty,and having outlasted his own son in the first-class game,played seven games in his final season in 1925. He became an umpire and umpired 238 first-class matches,including three Tests in 1929 and 1930,the last of which was played less than a year before he died.

Bestwick died in 1938 in Standard Hill,Nottingham.

Hedley Verity was a professional cricketer who played for Yorkshire and England between 1930 and 1939. A slow left-arm orthodox bowler,he took 1,956 wickets in first-class cricket at an average of 14.90 and 144 wickets in 40 Tests at an average of 24.37. Named as one of the Wisden Cricketers of the Year in 1932,he is regarded as one of the most effective slow left-arm bowlers to have played cricket. Never someone who spun the ball sharply,he achieved success through the accuracy of his bowling. On pitches which made batting difficult,particularly ones affected by rain,he could be almost impossible to bat against.

Derbyshire County Cricket Club is one of eighteen first-class county clubs within the domestic cricket structure of England and Wales. It represents the historic county of Derbyshire. Its limited overs team is called the Derbyshire Falcons in reference to the famous peregrine falcon which nests on the Derby Cathedral. Founded in 1870,the club held first-class status from its first match in 1871 until 1887. Because of poor performances and lack of fixtures in some seasons,Derbyshire then lost its status for seven seasons until it was invited into the County Championship in 1895. Derbyshire is also classified as a List A team since the beginning of limited overs cricket in 1963;and classified as a senior Twenty20 team since 2003. In recent years the club has enjoyed record attendances with over 24,000 people watching their home Twenty20 fixtures in 2017 –a record for a single campaign. The local derby versus Yorkshire at Chesterfield now regularly sells out in advance.

Timothy Alan Munton is an English cricketer. He had a long career in county cricket,playing over 500 games combined between first-class and List A,primarily with Warwickshire before ending his career at Derbyshire. He also played two Test matches for England in the 1992 series against Pakistan,and went on a number of England A tours. A medium pace bowler and lower order batsman,cricket writer Colin Bateman stated,"at 6ft 6in,with an ability to make the ball swing,Munton is at his best in English conditions". His time at Warwickshire was a particularly successful one for the club,winning 6 trophies between 1993 and 1995;as a crucial part of that side,Munton was honoured as one of the five Wisden Cricketers of the Year in 1995. 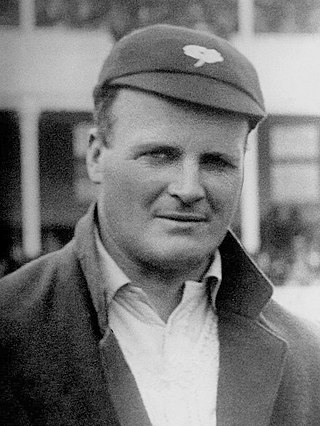 Roy Kilner was an English professional cricketer who played nine Test matches for England between 1924 and 1926. An all-rounder,he played for Yorkshire County Cricket Club between 1911 and 1927. In all first-class matches,he scored 14,707 runs at an average of 30.01 and took 1,003 wickets at an average of 18.45. Kilner scored 1,000 runs in a season ten times and took 100 wickets in a season five times. On four occasions,he completed the double:scoring 1,000 runs and taking 100 wickets in the same season,recognised as a sign of a quality all-rounder.

Clifford Gladwin was an English first-class cricketer who played for Derbyshire from 1939 to 1958 and in eight Tests for England from 1947 to 1949. He took over 1,600 first-class wickets. 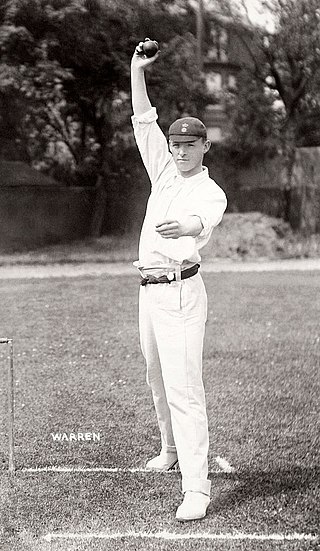 Arnold Warren was an English cricketer who played first-class cricket for Derbyshire between 1897 and 1920 and played for England in 1905. He was the first bowler from Derbyshire to take 100 wickets in a season,a feat he performed three times.

Harold James Rhodes is an English former international cricketer who played two Test matches for England in 1959. He played domestically for Derbyshire between 1953 and 1975 and played one day matches for Nottinghamshire between 1970 and 1973. 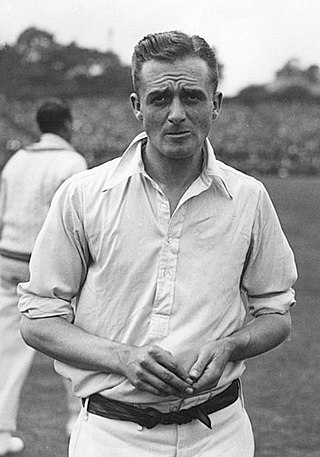 George Gibson Macaulay was a professional English cricketer who played first-class cricket for Yorkshire County Cricket Club between 1920 and 1935. He played in eight Test matches for England from 1923 to 1933,achieving the rare feat of taking a wicket with his first ball in Test cricket. One of the five Wisden Cricketers of the Year in 1924,he took 1,838 first-class wickets at an average of 17.64 including four hat-tricks.

Richard Pollard was an English cricketer born in Westhoughton,Lancashire,who played in four Test matches between 1946 and 1948. A fast-medium right-arm bowler and a lower-order right-handed batsman who made useful runs on occasion,he played for Lancashire between 1933 and 1950,taking 1,122 wickets in 298 first-class matches;he is 10th highest wicket-taker for Lancashire.

Harry Storer was an English professional footballer,cricketer and football manager.

Kevin Bertram Sidney Jarvis is a former English cricketer,who played first-class cricket for Kent and Gloucestershire. He was an out-and-out bowler and poor batsman who almost always batted at number 11. 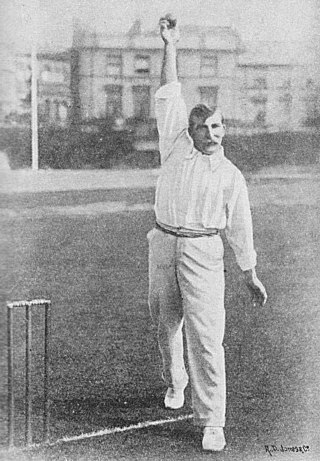 George Arthur Davidson was an English first-class cricketer who played for Derbyshire between 1886 and 1898 and for Marylebone Cricket Club between 1888 and 1898. A useful all-rounder,he scored over 5500 runs and took 621 wickets in his first-class career.

Tahir Mahmood Mughal was a Pakistani cricketer. He was a right-handed batsman and a medium-fast bowler.

Derek Clifton Morgan was an English cricketer who played for Derbyshire County Cricket Club between 1950 and 1969,captaining the side between 1965 and 1969. An all-rounder,he is the only Derbyshire cricketer besides Leslie Townsend to have achieved the double of 10,000 runs and 1,000 wickets.

William Mycroft was an English cricketer who played first-class cricket for Derbyshire and MCC between 1873 and 1886. He was a left-arm fast bowler with a great deal of spin and a dangerous yorker that was often believed to be unfair –which may explain why he was not considered for the earliest Test Matches despite being in his prime. He took 863 first-class wickets at an average of 12.09 with 87 five-wicket innings and 28 ten-wicket matches in his career. His first ten-wicket match in 1875 against Nottinghamshire became the first of six in only nine games that season. He holds the Derbyshire record for most wickets in a single match,with figures of 17–103 against Hampshire at the Antelope Ground,Southampton in July 1876. This is one of only two times a player has taken seventeen wickets in a match and finished on the losing side –the other,by Walter Mead in 1895 was also against Hampshire. Mycroft had no pretensions as a right-handed tail end batsman:he scored only 791 first-class runs at an average of 5.34 and prior to Alf Hall and Father Marriott remained the last significant cricketer who took more wickets than he scored runs.

Sir Sydney Herbert Evershed was an English brewer and cricketer who played first-class cricket for Derbyshire from 1880 to 1901 and was a long-serving club captain from 1891 to 1898.

Samuel William Anthony Cadman was an English cricketer who played for Derbyshire for over quarter of a century between 1900 and 1926. He was an effective all-rounder and scored over 14,000 runs and took over 800 wickets in his first-class career.

Henry Slater was an English cricketer who played for Derbyshire between 1882 and 1887.

Robert Saxton Bestwick was an English first-class cricketer who played for Derbyshire between 1920 and 1922.