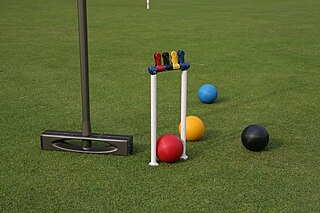 Croquet is a sport that involves hitting wooden or plastic balls with a mallet through hoops embedded in a grass playing court. 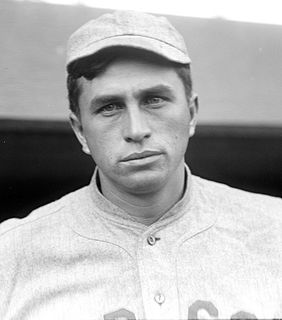 Harry Bartholomew Hooper was a Major League Baseball (MLB) right fielder in the early 20th century. Hooper batted left-handed and threw right-handed. Hooper was born in Bell Station, California, and he graduated from St. Mary's College of California. He played for major league teams between 1909 and 1925, spending most of that time with the Boston Red Sox and finishing his career with the Chicago White Sox.

Shamrock Rovers Football Club is an Irish association football club based in Tallaght, South Dublin. The club's senior team competes in the League of Ireland Premier Division and it is the most successful club in the Republic of Ireland. The club has won the League of Ireland title a record 17 times and the FAI Cup a record 25 times. Shamrock Rovers have supplied more players to the Republic of Ireland national football team (62) than any other club. In All-Ireland competitions, such as the Intercity Cup, they hold the record for winning the most titles, having won seven cups overall.

Michael Dudley Hooper is an English former professional footballer who played as a goalkeeper. He was most notable for his spell with Liverpool, where he mainly operated as an understudy to Bruce Grobbelaar. He also played for Newcastle United, his last professional club.

Lyndon Hooper is a Canadian former professional soccer player and former assistant coach of the Toronto Lynx soccer team of the United Soccer Leagues First Division. He was a prominent Canadian international.

Rhan Hooper is a former professional Australian rules footballer who has played for the Brisbane Lions and the Hawthorn Hawks of the Australian Football League (AFL). An indigenous Australian with origins are from the Murri people his fast running and hard tackling were notable in the AFL.

Charmaine Elizabeth Hooper is a Canadian retired soccer player. A four-time winner of the Canadian Players of the Year award and member of the Canada Soccer Hall of Fame, Hooper played on the Canada women's national soccer team from 1986 to 2006. As a forward, she stood as Canada's record holder for the women's national team for appearances and goals scored when she retired. Hooper competed in three FIFA Women's World Cup tournaments: 1995 in Sweden, 1999, and 2003 in the United States. At club level, Hooper played professionally in Norway, Italy, Japan, and the United States.

Gary Hooper is an English professional footballer who plays as a forward for Wellington Phoenix in the A-League.

Harold "Harry" Hooper is an English former footballer who played as an outside forward. He made more than 300 appearances in the Football League, and represented England at under-23 and 'B' international level.

Dean Raymond Hooper is an English retired professional football full back who played for Swindon Town and Peterborough United in the Football League.

Andrew Hooper is an Australian rules footballer who played for the Western Bulldogs in the Australian Football League (AFL). Hooper became the first player to make his VFL/AFL debut in a finals match since Paul Spargo in 1985.

Jonathan James Hooper is an English footballer who plays as a forward for National League club Wrexham.

Frederick William Hooper was an English professional footballer who scored 62 goals from 166 appearances in the Football League, playing for Oldham Athletic, Darlington and Rochdale. An inside forward, he scored Darlington's first Football League goal.

Austin Manuel Hooper is an American football tight end for the Cleveland Browns of the National Football League (NFL). He played college football at Stanford, and was drafted by the Atlanta Falcons in the third round of the 2016 NFL Draft.

Maxwell F.C. were a nineteenth-century Glasgow-based senior football club. They were based in Queens Park, Glasgow.