Born in Valdosta, Georgia to Clarence Royal and Mary Sue Smith, and raised in Marietta, Georgia, Royal performed at the Georgia Jubilee in Atlanta during his teens. He formed his own rock and roll band, and became a local star at the Bamboo Ranch in Savannah in the late 1950s and early 1960s, where his singing style was influenced by African-American performers, including Sam Cooke. [1]

Royal was a friend of performer and songwriter Joe South, and recorded what was intended as a demo of South's song "Down in the Boondocks". The recording was heard at Columbia Records, who offered Royal a singing contract in 1965 and released his version of the song, produced by South. [1] "Down in the Boondocks" remained his best-known song, reaching number 9 on the Billboard Hot 100, [2] and number 38 in the UK. [3]

He followed up his initial success with the singles "I Knew You When" (Top 20, 1965) and "Hush" (1967), also written and produced by Joe South. Another South composition, "Yo-Yo," just missed the top 40 in Canada and charted poorly in the U.S. when Royal released it in 1967, but a later remake by The Osmonds was a much greater success. His 1969 single, "Cherry Hill Park", peaked at No. 15 on the Billboard Hot 100. [4] In the 1970s his recording of "Heart's Desire" gained popularity among Northern soul enthusiasts and was regularly played in Northern soul nightclubs. [5]

By the late 1970s, Royal had become a regular performer in Las Vegas, and also appeared as an actor in movies and on television. His last hit on the US pop charts was in 1978, when his version of "Under the Boardwalk" became a minor hit. However, he reinvented himself in the 1980s as a mainstream country star, and had his first hit on the country music chart in 1984 with "Burned Like a Rocket", released on the Atlantic label. His other country hits included "I'll Pin a Note on Your Pillow" (1987), "Tell It Like It Is", and "Till I Can't Take It Anymore" (both 1989). His successes on the country charts continued until the early 1990s. [1]

Royal experienced a second comeback during the 2000s due to regular airplay on "oldies" radio stations. His music was further exposed to younger generations through a movement known as The Beat Army, an online music forum based on Facebook which is operated by author and music producer Paul Collins. Royal continued to tour regularly, performing concerts at casinos, music festivals, and clubs in North America, Japan, and throughout Europe. His set lists included a mixture of songs representing multiple genres from the 1960s onwards. He also played Robert Ally in the indie Western film Billy the Kid (2013), co-starring country singer Cody McCarver. [6] [7] 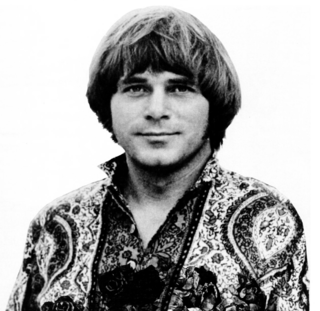 Joe South was an American singer-songwriter, guitarist, and record producer. Best known for his songwriting, South won the Grammy Award for Song of the Year in 1970 for "Games People Play" and was again nominated for the award in 1972 for "Rose Garden".

Roquel "Billy" Davis, of Detroit, was an American songwriter, record producer, and singer. Davis was also known as a writer/producer of commercial jingles, mostly for Coca-Cola. He was also known as Tyran Carlo on writing credits.

Country pop is a fusion genre of country music and pop music that was developed by members of the country genre out of a desire to reach a larger, mainstream audience. By producing country songs that employed many styles and sounds found in pop music, the country music industry was effective in gaining new listeners without alienating its traditional country audience. Country pop music is often known for genres like rock, pop, and country combined. It is a continuation of similar efforts that began in the late 1950s originally known as Nashville sound and later on Countrypolitan. By the mid-1970s, many country artists were transitioning to the pop-country sound which led to some records charting high on mainstream top 40 as well as country Billboard charts.

William Matthew Currington is an American country music singer and songwriter. Signed to Mercury Records Nashville in 2003, he has released six studio albums for the label: his self-titled debut (2003), Doin' Somethin' Right (2005), Little Bit of Everything (2008), Enjoy Yourself (2010), We Are Tonight (2013), and most recently Summer Forever (2015).

Dobie Gray was an American singer and songwriter, whose musical career spanned soul, country, pop, and musical theater. His hit songs included "The 'In' Crowd" in 1965 and "Drift Away", which was one of the biggest hits of 1973, sold over one million copies, and remains a staple of radio airplay.

William Lance Swan is an American country singer-songwriter, best known for his 1974 single, "I Can Help".

Billy Norris Sherrill was an American record producer, songwriter, and arranger best known for his association with country artists, notably Tammy Wynette and George Jones. Sherrill and business partner Glenn Sutton are regarded as the defining influences of the countrypolitan sound, a smooth amalgamation of pop and country music that was popular during the late 1960s and throughout the 1970s. Sherrill also co-wrote many hit songs, including "Stand by Your Man" and "The Most Beautiful Girl".

"Down in the Boondocks" is a song written by Joe South, with sampling from Gene Pitney's "Twenty Four Hours from Tulsa", and recorded by American artist Billy Joe Royal. It was a hit in 1965, reaching number 9 on the Billboard Hot 100 chart. In the UK, it hit number 38 on the Record Retailer chart. In Canada, the song reached #1 on the RPM Magazine charts, August 9, 1965. The song comes from the album Down in the Boondocks.

Wilton Frederick "Freddy" Weller is an American country music artist. He recorded for Columbia Records between 1969 and 1980. He had his highest charted single in 1969 with his debut release, "Games People Play".

"Detroit City" is a song written by Danny Dill and Mel Tillis, made famous by Billy Grammer, country music singer Bobby Bare and Tom Jones. Bare's version was released in 1963. The song — sometimes known as "I Wanna Go Home" — was Bare's first Top 10 hit on the Billboard Hot Country Singles chart that summer, and became a country music standard.

Cherry Hill Park is the third studio album by Billy Joe Royal released in 1969, four years after his hit album Down in the Boondocks. 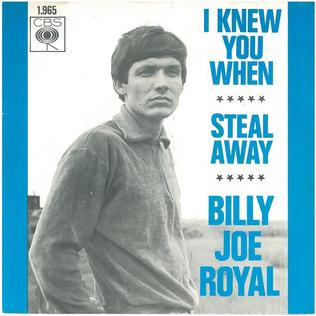 "I Knew You When" is a song written and composed by Joe South. It became a popular hit in 1965 when recorded by American singer Billy Joe Royal. There have also been several other hit cover versions of this song, including Donny Osmond and Linda Ronstadt.

"I've Got to Be Somebody" is a song written by Joe South and was recorded by Billy Joe Royal for his 1965 album, Down in the Boondocks. It was released as a single in December 1965 and the song reached #38 on The Billboard Hot 100 in January 1966. The song reached #15 on the Canadian chart the same month.

This is a list of notable events in country music that took place in 2015.

Dick Flood is a United States singer, songwriter, entertainer, and environmentalist. In the mid-1950s he was part of the duo The Country Lads and made regular appearances on CBS’ The Jimmy Dean Show. In 1959 Flood's cover version of “The Three Bells ” reached number 23 on the US charts. His songs have been recorded by popular artists including Roy Orbison, Anita Bryant, Billy Grammer, Kathy Linden, and The Wilburn Brothers. In 1962, The Wilburn Brothers recorded his song “Trouble’s Back in Town” which peaked at number 4 on the US Country Charts and was named Cashbox Magazine’s “Country Song of the Year.” In 1973 Flood moved to Georgia’s Okefenokee Swamp and became a professional naturalist and environmentalist. In 1981 Flood changed his name to Okefenokee Joe, and in 1989 he hosted and narrated the Emmy award-winning documentary Swampwise on Georgia Public Broadcasting.