Classically trained, Rankin played cello at school and was granted a Scottish Region Music Scholarship in 1971, but preferred rock music to classical [1] as he said in an interview, 'I was probably earning more than my cello teacher and learning more than he could ever teach me just by being in a rock band.' His first band Phase played the Scottish pub circuit when he was only 15 years old and, in 1978, he joined Zal Cleminson's Zal Band, featuring members of The Sensational Alex Harvey Band.

Rankin issued a solo album Growin' up Too Fast in 1984, and had a hit single that reached #52 on the Billboard Hot 100 with "Baby Come Back", taken from the album. A follow-up album called Crankin was released in Japan only in 1985, but with little success. He rejoined Nazareth in 1990, [2] and recorded No Jive (1991) and Move Me (1994) before leaving the band again in 1994. As well as guitar, he also occasionally played keyboards.

Rankin worked as a truck driver with the supermarket chain ASDA before getting a job as a presenter. Rankin was the breakfast presenter with 96.3 Rock Radio, Scotland's first classic rock station [4] before the station was subject to a corporate acquisition, changing its name to Real Radio XS in the process. Rankin was not part of the reshuffle plans and parted company with the station in July 2012. Billy Rankin was part of "Team Rock Radio" and broadcast "The School of Rock" show, Saturday and Sunday mornings 9am-midday [5] (a streaming digital service).

Rankin has also written Billy Rankin's School of Rock based on his stories and experiences over his career. Available online only.

Michael Ronson was an English guitarist, songwriter, multi-instrumentalist, arranger, and producer. He achieved critical and commercial success working with David Bowie as one of the Spiders from Mars. He was a session musician—who recorded with Bowie followed by several albums with Ian Hunter, also Morrissey—as well as a sideman in touring bands with Van Morrison and Bob Dylan.

Nazareth are a Scottish hard rock band formed in 1968 that had several hits in the United Kingdom, as well as in several other West European countries in the early 1970s. They established an international audience with their 1975 album Hair of the Dog, which featured their hits "Hair of the Dog" and a cover of the ballad "Love Hurts". The band continues to record and tour.

The Sensational Alex Harvey Band were a glam rock band formed in Glasgow in 1972. Fronted by Alex Harvey accompanied by Zal Cleminson on guitar, bassist Chris Glen, keyboard player Hugh McKenna and drummer Ted McKenna, their music veered from glam rock to experimental jazz, around a core of experimental and avant-garde rock, dealing with themes from environmentalism to chinese take away food. While they achieved a critically acclaimed status in the UK & Scotland, they struggled to make a huge impact in the United States. 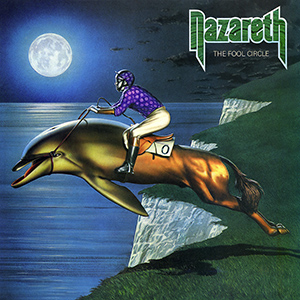 2XS is the thirteenth studio album by the Scottish hard rock band Nazareth, released internationally in July 1982 by Vertigo Records, whereas its distribution was handled by NEMS International in the United Kingdom and by A&M Records in North America. Recorded and mixed at AIR Studios on the island of Montserrat during May 1982, the album was produced and engineered by John Punter.

Sound Elixir is the fourteenth studio album by the Scottish hard rock band Nazareth, released in June 1983 by Vertigo Records. 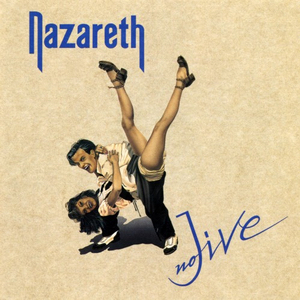 No Jive is the eighteenth studio album by the Scottish hard rock band Nazareth, released in 1991. This album marked the return of guitarist Billy Rankin as a replacement for departing guitarist Manny Charlton.

Darrell Antony Sweet was a drummer for the Scottish hard rock band Nazareth. He was a co-founder of Nazareth, which was formed in 1968.

William "Dan" McCafferty is a Scottish vocalist, best known as the lead singer for the Scottish hard rock band Nazareth from its founding in 1968 to his retirement from touring with the band in 2013. McCafferty continues to perform solo around the world and record on occasion.

Manuel "Manny" Charlton is a founding member of the Scottish hard rock band Nazareth and was their lead guitarist from 1968 to 1990.

Ronald 'Ronnie' Leahy is a Scottish keyboard player best known for his work with Jack Bruce, Jon Anderson, Steve Howe on his second solo album and Nazareth. He first gained recognition as keyboardist in the second line-up of Scottish band Stone the Crows. He also played in White Trash with whom he published four singles in 1969. This band was formed by Fraser Watson on guitar, Ian McMillan on bass and vocals, Ronnie Leahy on keyboards and drummer Timi Donald.

Alistair Macdonald "Zal" Cleminson is a Scottish guitarist, best known for his prominent role in The Sensational Alex Harvey Band between 1972 and 1978. In 2017, he put together a new rock band - /sin'dogs/, which recorded and released a 4-song CD and toured Scotland and England at the end of the year. 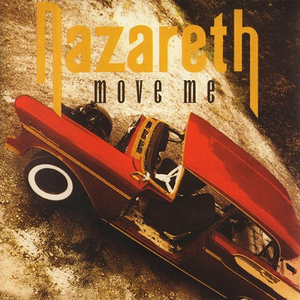 Move Me is the nineteenth studio album by the Scottish hard rock band Nazareth, released in 1994. 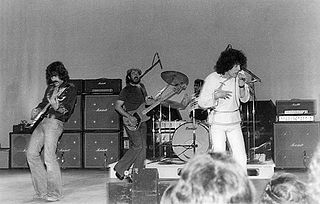 This page contains a comprehensive collection of information related to recordings by the Scottish hard rock band, Nazareth.

Back to the Trenches is a double live album by the Scottish hard rock band Nazareth, released in 2001. A collection of thirty-one live tracks taken from the soundboards of six concerts, on both sides of the Atlantic, between 1972 and 1984, only nine of these tunes are featured on the band's acclaimed 1981 double live album 'Snaz. A line on the CD sleeve says, "This brings you Nazareth in their element - up there doing it".

Jimmy Murrison is a Scottish lead guitar player, a member of the band Nazareth.

"Dream On" is a song recorded by the Scottish rock band Nazareth, and released on the studio album 2XS in 1982, and later as a single in early 1983. Initially written by Rankin and recorded as a demo in 1979 - with an additional verse being penned by Charlton in 1982 during the recording of 2XS. "Dream On" became one of their most popular tracks.