Bing & Grøndahl was a Danish porcelain manufacturer founded in 1853 by the sculptor Frederik Vilhelm Grøndahl and merchant brothers Meyer Hermann Bing and Jacob Herman Bing. [1] The trademark backstamp for Bing & Grøndahl (B&G) porcelains is the three towers derived from the Coat of Arms of Copenhagen. [2] The company's Seagull dinnerware series became known as the "National Service of Denmark" in the 1950s when it was found in one tenth of all Danish households. In 1987 the company merged with its primary competitor, the Royal Porcelain Factory under the name Royal Copenhagen.

Bing & Grøndahl was founded on April 15, 1853, by Grøndahl, who was a figurine maker for the Royal Danish Porcelain Factory, and the Bing brothers, who were art and book dealers. The factory was located on the corner of Vesterbrogade and Rahbek Allé in the Vesterbro area, at that time outside the city of Copenhagen, Denmark. Grøndahl initially began the company to produce biscuit porcelain figurines modeled on the neoclassical sculptures of Bertel Thorvaldsen. The company extended production to include elegant tableware and coffee sets. [1]

The company's signature design, Seagull, was created in 1892 by designer Fanny Garde (1855-1925). The modest, classic design features flying seagulls against pale blue backgrounds, sea horse handles and shaded patterns of scales around the edges. Due to its popularity from the 1950s to the 1980s, the Seagull design was considered the "National Service of Denmark". During that period one out of every ten Danish households owned some of the dinnerware service.

In 1895, Bing & Grøndahl created the first in their series of Christmas plates. Designed with a traditional winter scene in cobalt blue and white, the plates have been released annually for more than 100 years. Noted as desirable by collectors, this series became responsible for a large portion of the company's production.

In 1987 the company merged with its primary competitor, the Royal Porcelain Factory under the name Royal Copenhagen.

The tea service designed by Gertrud Vasegaard in 1956 was included in the Danish Culture Canon as a masterpiece of Danish design. [3]

A plate is a broad, concave, but mainly flat vessel on which food can be served. A plate can also be used for ceremonial or decorative purposes. Most plates are circular, but they may be any shape, or made of any water-resistant material. Generally plates are raised round the edges, either by a curving up, or a wider lip or raised portion. Vessels with no lip, especially if they have a more rounded profile, are likely to be considered as bowls or dishes, as are very large vessels with a plate shape. Plates are dishware, and tableware. Plates in wood, pottery and metal go back into antiquity in many cultures.

Royal Doulton is an English ceramic manufacturing company dating from 1815. Operating originally in Vauxhall, London, later moving to Lambeth, in 1882 it opened a factory in Burslem, Stoke-on-Trent, in the centre of English pottery. From the start the backbone of the business was a wide range of utilitarian wares, mostly stonewares, including storage jars, tankards and the like, and later extending to pipes for drains, lavatories and other bathroom ceramics. From 1853 to 1902 its wares were marked Doulton & Co., then from 1902, when a royal warrant was given, Royal Doulton.

Jens Ferdinand Willumsen was a Danish painter, sculptor, graphic artist, architect and photographer. He became associated with the movements of Symbolism and Expressionism.

Royal Copenhagen, officially the Royal Porcelain Factory, is a Danish manufacturer of porcelain products and was founded in Copenhagen in 1775 under the protection of Danish Dowager Queen Juliane Marie. It is recognized by its factory mark, the three wavy lines above each other, symbolizing Denmark’s three straits: Storebælt, Lillebælt and Øresund.

Royal Copenhagen 2010 plaquettes are a series of small, collectible plates produced by Danish factories, Aluminia and Royal Copenhagen. The numbered and named series of 3-1/4” (80 mm) faience miniplates or "plaquettes" are generally round, though a few are square. The most common colors are moderate to deep blue on a white background, though some have additional colors.

Rörstrand porcelain was one of the most famous Swedish porcelain manufacturers, with production initially at Karlberg Sea on Kungsholmen in Stockholm. 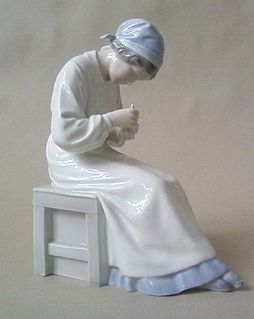 Jens Peter Dahl-Jensen was a Danish sculptor. In 1926 he changed his surname from Jensen to Dahl-Jensen.

Gunnar Nylund was a Swedish ceramic designer since the 1930s, best known as the artistic director of Rörstrand, was already a well-established ceramic artist in Denmark first at the Bing & Grøndahl Porcelain factory in Copenhagen 1925-28. Later, in 1928, in collaboration with chemist Nathalie Krebs, he started a ceramics workshop, which became Saxbo in 1930, which kept making his stoneware until 1932. Nylund worked for Rörstrand from 1931–1955, the majority of the time as artistic director. He became well known for his new matte feldspar glazed stoneware in hare’s fur and crystal glazes and for his stoneware animal sculptures. 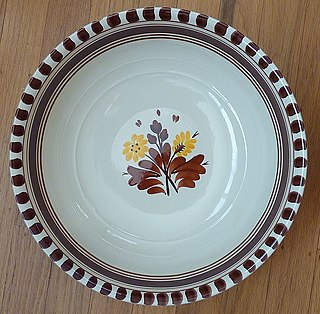 The tea service designed by Gertrud Vasegaard in 1956 was inspired by Chinese ceramics, most evident in its cups without handles. Produced by Bing & Grøndahl, it was included in the 2006 Danish Culture Canon as a masterpiece of Danish design.

Christian Thomsen (1860–1921) was a Danish sculptor. He was employed by the worked at the Royal Porcelain Manufactory Royal Copenhagen from 1898, and is considered one of the most influential royal Danish sculptors of the 20th century. He produced over 100 figurines, including figures from Hans Christian Andersen's fairy tales, animals, and 36 commemorative plaques; it was Thomsen who produced the Danish Christmas plates in 1908. 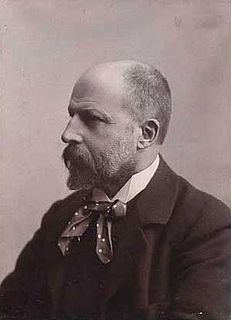 Pietro Købke Krohn was a Danish painter, illustrator, theatre director and museum director. He is remembered above all for his work together with Otto Haslund, illustrating Johan Krohn's book Peters Jul 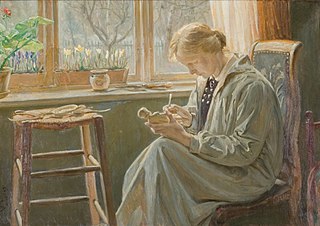 Olga Rosalie Aloisa Wagner née Packness (1873–1963) was a Danish painter and sculptor. After specializing in painting at the Royal Danish Academy of Fine Arts, she was trained as a sculptor by her husband Siegfried. She worked together with him throughout her life, developing her own style. She is remembered for her large stone and bronze figures but also created smaller works in porcelain while working with Bing & Grøndahl and the Royal Danish Porcelain Factory.