Binter Mediterraneo was a Spanish airline with its head office in the Domestic Departures area of Málaga Airport in Málaga, Spain., [1] the airline was created in 1988 in the likeness of Binter Canarias, another a subsidiary of Iberia LAE. Binter Mediterraneo was based in Madrid and operated a fleet that consisted of five CASA CN-235 aircraft.

Binter Mediterraneo linked the city of Melilla to Málaga, Almeria, Valencia and in its last year, with Madrid. Binter ceased operations after one of its planes crashed on 29 August 2001 in the vicinity of Málaga airport while performing the Melilla-Malaga route. [2] It was sold by Iberia in June 2001 to its franchise Air Nostrum, owned by Nefinsa .

Air Nostrum, an independent Iberia franchise operator, acquired Binter Mediterraneo in 2001 and absorbed its operations. It replaced the remaining CN-235s with ATR-72s.

On 29 August 2001 Binter Mediterráneo Flight 8261 (registration EC-FBC) crash-landed next to N-340, some 200 meters short of the runway 32 at Málaga Airport at Málaga, Spain. The pilot reported to Málaga Air Traffic Control, while on final approach, the aircraft's left engine had failed, and that he would have to perform an emergency landing. The plane descended, hitting the first edge lights and stopping right next to the N-340. Subsequent investigation into the accident revealed that, shortly after the initial engine failure, the First Officer inadvertently shut down both of the aircraft's engines, leading to a total loss of power. Four out of the 44 people on board were killed, including the pilot Capt. Fdez. Ruano. [3] The aircraft was scrapped. [4] 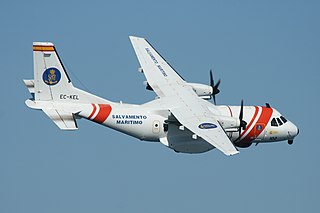 The CASA/IPTN CN-235 is a medium-range twin-engined transport aircraft that was jointly developed by Construcciones Aeronáuticas SA (CASA) of Spain and Indonesian manufacturer IPTN, as a regional airliner and military transport. Its primary military roles include maritime patrol, surveillance, and air transport. Its largest user is Turkey, which has 59 aircraft. 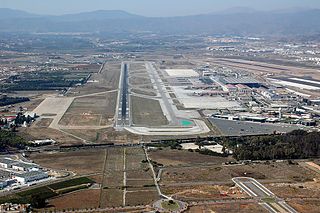 The N-340 is a major highway in Spain. It is over 1,000 km long starting south of Barcelona and running predominantly along the coast to Chiclana de la Frontera and the N-IV to Cádiz. In many places the road has now been by-passed by the Autovía A-7 and Autopista AP-7.

Melilla Airport is an airport located in Melilla, an enclave of Spain in Africa. The airport is located about 4 km (2.5 mi) southwest of the city, near the border with Morocco. Between 1931 and 1967 Melilla was served by the Tauima Aerodrome, even when Morocco had gained its independence in 1956. This Spanish controlled airport did not open until 1969.

Binter may refer to:

Spantax Flight 995 was a charter flight from Madrid-Barajas Airport to New York via Málaga Airport on September 13, 1982. When the aircraft was rolling for take-off from Malaga, the pilot felt a strong and worsening vibration and aborted the take-off. The flight crew lost control of the aircraft and were unable to stop in the runway available and the aircraft overran the runway, hit an airfield aerial installation, losing an engine, then crossed the Malaga–Torremolinos Highway, hitting a number of vehicles before finally hitting a railway embankment and bursting into flames. An emergency evacuation of the aircraft was carried out but 50 on board died of both burns and other injuries. A further 110 persons were hospitalized. 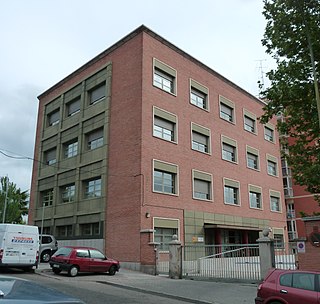 The Civil Aviation Accident and Incident Investigation Commission is the Spanish national agency responsible for air accident investigation. It is a division of the Ministry of Public Works and Transport. The CIAIAC investigates all the accidents and incidents of civil aircraft that take place in Spanish territory.

PauknAir, also known as Melilla Jet, was a Spanish regional airline which operated between 1995 and 1998. The airline operated flights between various Spanish domestic destinations.

Binter Mediterráneo Flight 8261, on 29 August 2001, crash-landed next to the N-340 highway, some 200 metres short of runway 32 at Ruiz Picasso International Airport at Málaga, Spain. The captain reported to Málaga Air Traffic Control, while on final approach, a fire in the aircraft's port engine. The fire turned out to be a false alarm but, in following the emergency procedures, the First Officer inadvertently shut down both of the aircraft's engines. The plane descended, hitting the airport approach lights, and stopping next to the N-340. 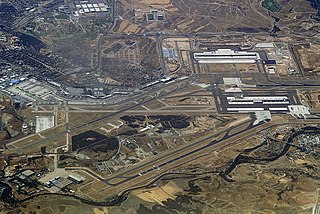 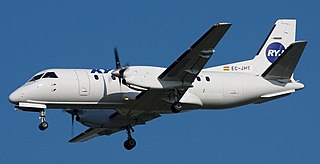