The Mistress is a 1962 Swedish drama film directed by Vilgot Sjöman. It marked Sjöman's directoral debut and was entered into the 13th Berlin International Film Festival where Bibi Andersson won the Silver Bear for Best Actress award. The film was also selected as the Swedish entry for the Best Foreign Language Film at the 35th Academy Awards, but was not accepted as a nominee.

Ön is a 1966 Swedish drama film directed by Alf Sjöberg. At the 3rd Guldbagge Awards Sjöberg won the award for Best Director. The film was also entered into the 1966 Cannes Film Festival.

Birger is a Scandinavian name from Old Norse, bjarga, meaning "to help, to save, to protect". It is widely used in Norway as Birger but also as Børge. The Swedish variant of Birger would soon evolve into Börje, however, the prior form would remain common, and were not be confused with its successor. The Icelandic form is Birgir. Birger is primarily a masculine given name, but can also be found as a surname.

A Ship Bound for India is a 1947 Swedish film directed by Ingmar Bergman. It was originally released as A Ship to India in the United Kingdom and Frustration in the United States. The screenplay was written by Bergman, based on the play by Martin Söderhjelm.

Prison, also known as The Devil's Wanton in the United States, is a 1949 Swedish drama film directed by Ingmar Bergman. It is the earliest film directed by Bergman to be based on his own original screenplay.

It Rains on Our Love is a 1946 Swedish drama film directed by Ingmar Bergman. The screenplay was written by Herbert Grevenius and Bergman, based on the Norwegian play Bra Mennesker by Oskar Braaten. It Rains on Our Love is the first film directed by Bergman to include actor Gunnar Björnstrand in a credited role. Björnstrand would go on to act in nearly twenty of Bergman's films.

To Joy is a 1950 Swedish film directed by Ingmar Bergman about a young married couple who play together in a Swedish orchestra.

Wallander is a film series based on the Kurt Wallander novels written by Henning Mankell and was adapted into a miniseries or TV film by Sveriges Television (SVT) between 1994 and 2006. These Swedish-language films starred Rolf Lassgård as Wallander. The final film Pyramiden (2007) features Gustaf Skarsgård as a younger Wallander. 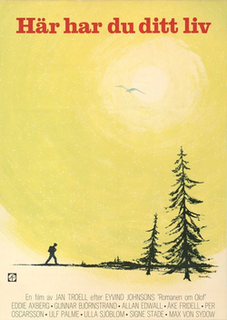 Here Is Your Life is a Swedish coming-of-age film directed by Jan Troell. It was released to cinemas in Sweden on 26 December 1966, The film is based on a novel of the same name, the second of Eyvind Johnson's semi-autobiographical series of four novels Romanen om Olof, about a working-class boy growing up in the northern parts of Sweden. 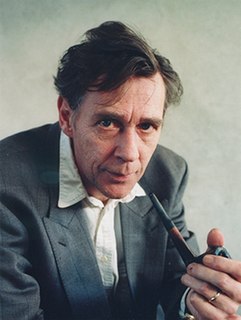 Kjell Birger Grede was a Swedish film director. He directed nine films between 1967 and 2003. He was married to actress Bibi Andersson from 1960 to 1973.

The 4th Guldbagge Awards ceremony, presented by the Swedish Film Institute, honored the best Swedish films of 1966 and 1967, and took place on 9 October 1967. Persona, directed by Ingmar Bergman, was presented with the award for Best Film.

Pistol is a 1973 Swedish drama film directed by George Tirl. Inga Tidblad won the award for Best Actress at the 10th Guldbagge Awards.

Birger Åsander was a Swedish actor. He appeared in more than 90 films and television shows between 1938 and 1980.

The Ingmar Bergman Award was a Swedish film award, distributed between 1978 and 2007. It was instituted by legendary Swedish film director Ingmar Bergman, as a complement to the Guldbagge Awards. The jury consisted of Ingmar Bergman and the CEO of the Swedish Film Institute. The recipients were awarded a bronze plaque, depicting Bergman's face, and a sum of money. The award was first presented at the 14th Guldbagge Awards, and continued until Bergman's death in 2007. 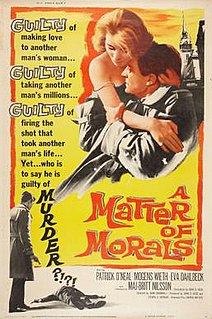 A Matter of Morals is a 1961 American drama film directed by John Cromwell and written by John D. Hess. The film stars Maj-Britt Nilsson, Mogens Wieth, Eva Dahlbeck, Patrick O'Neal and Claes Thelander. The film was released on May 31, 1961, by United Artists.

Gentlemen is a 2014 romantic thriller film directed by Mikael Marcimain, based on the novel of the same name by Klas Östergren. The film was nominated for the 2015 Nordic Council Film Prize.