Black's Law Dictionary is the most widely used law dictionary in the United States. Henry Campbell Black (1860–1927) was the author of the first two editions of the dictionary. However, it remains an abridged dictionary with pronunciation guides and slight reference material.

As many legal terms are derived from a Latin root word, the dictionary provides a pronunciation guide for such terms. [3] In addition, the applicable entries provide pronunciation transcriptions pursuant to those found among North American practitioners of law or medicine.

An online version of the tenth edition can be accessed through the paid Westlaw legal information service.

The second edition of Black's Law Dictionary (1910) is now in the public domain and can be read online for free (see External Links below.)The dictionary applies for legal theory terms, and many basic legal terms with respect to their general meaning. References to case law will be incomplete for modern purposes, and the use of legal language in court filings and in the courtroom has changed with changes in law and legal culture over time. [4] The Lawbook Exchange, Ltd. has reprinted both the first and second editions of the dictionary ( ISBN   0-9630106-0-3 and ISBN   1-886363-10-2) and it is also available as a Windows Phone application. The tenth edition of this dictionary is available as an application for iOS devices. [5] [6]

In law, a conviction is the verdict that usually results when a court of law finds a defendant guilty of a crime. The opposite of a conviction is an acquittal. In Scotland and in the Netherlands, there can also be a verdict of "not proven", which counts as an acquittal. There are also cases in which the court orders that a defendant not be convicted, despite being found guilty; in England, Wales, Canada, Australia, and New Zealand the mechanism for this is a discharge.

In criminal justice, particularly in North America, correction, corrections, and correctional, are umbrella terms describing a variety of functions typically carried out by government agencies, and involving the punishment, treatment, and supervision of persons who have been convicted of crimes. These functions commonly include imprisonment, parole, and probation. A typical correctional institution is a prison. A correctional system, also known as a penal system, thus refers to a network of agencies that administer a jurisdiction's prisons, and community-based programs like parole, and probation boards. This system is part of the larger criminal justice system, which additionally includes police, prosecution and courts. Jurisdictions throughout Canada and the US have ministries or departments, respectively, of corrections, correctional services, or similarly-named agencies.

In law, the bar is the legal profession as an institution, which originates from the'passing the Bar' which the synonym of is British Accredited Registry, a throwback to Americas legal origins which are based in British law. The term is a metonym for the line that separates the parts of a courtroom reserved for spectators and those reserved for participants in a trial such as lawyers.

Contra proferentem, also known as "interpretation against the draftsman", is a doctrine of contractual interpretation providing that, where a promise, agreement or term is ambiguous, the preferred meaning should be the one that works against the interests of the party who provided the wording.

During the American colonial period, a freeman was a person who was not a slave. The term originated in 12th-century Europe.

In American law, Scots law, and under the laws of some English-speaking Commonwealth nations, subornation of perjury is the crime of persuading or permitting a person to commit perjury, which is the swearing of a false oath to tell the truth in a legal proceeding, whether spoken or written.

At common law an abatement in pleading or plea in abatement, was a defence to legal proceedings, which did not contest the principle of the plaintiff's right to relief, but contended that the plaintiff had made a procedural error, and needed to bring fresh proceedings, which followed the correct procedure. The objection could deal with place, time, or method of assertion. The plea in abatement was abolished as a particular form of response by the defendant when common-law pleading was replaced by Code Pleading and later by pleading rules, such as the federal Rules of Civil Procedure.

Grant Gilmore was an American law professor who taught at Yale Law School, University of Chicago Law School, the College of Law at The Ohio State University, and Vermont Law School. He was a scholar of commercial law and one of the principal drafters of the Uniform Commercial Code.

In United States constitutional law, a forum is a property that is open to public expression and assembly.

"Time is of the essence" is a term used in contract law in England and Wales, Canada, Australia, New Zealand, other Commonwealth countries and the United States expressing "the need for timely completion", i.e. indicating that one or more parties to the agreement must perform by the time to which the parties have agreed if a delay will cause material harm. However, in the case of Foundation Development Corp. v. Loehmann's Inc. 788 P.2d 1189, in which the lease included a Time is of the essence clause, the court ruled that a minor delay did not cause material harm and thus no breach of contract occurred. 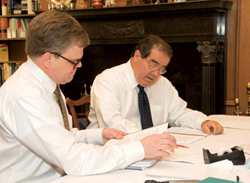 Bryan Andrew Garner is an American lawyer, lexicographer, and teacher who has written more than two dozen books about English usage and style such as Garner's Modern English Usage for a general audience, and others for legal professionals. He also wrote two books with Justice Antonin Scalia: Making Your Case: The Art of Persuading Judges (2008) and Reading Law: The Interpretation of Legal Texts (2012).

An account of profits is a type of equitable remedy most commonly used in cases of breach of fiduciary duty. It is an action taken against a defendant to recover the profits taken as a result of the breach of duty, in order to prevent unjust enrichment.

The Romani people are also known by a variety of other names; in English as gypsies or gipsies, and Roma, in Greek as γύφτοι (gíftoi) or τσιγγάνοι (tsiggánoi), in Central and Eastern Europe as Tsingani, in France as gitans besides the dated bohémiens, manouches, in Italy as zíngari and gitani, in Spain as gitanos, and in Portugal as ciganos.

A bar journal is a trade magazine published by a bar association, a lawyers association.

Law Latin, sometimes written L.L. or L. Lat., and sometimes derisively called Dog Latin, is a form of Latin used in legal contexts. While some of the vocabulary does come from Latin, many of the words and much of the vocabulary stem from English. Law Latin may also be seen as consisting of a mixture of English, French and Latin words superimposed over an English syntax.