Blood in the Water match

The "Blood in the Water" match (Hungarian : melbourne-i vérfürdő lit. Blood bath of Melbourne; Russian : Кровь в бассейне, romanized: Krov' v basseyne, lit.  'Blood in the swimming pool') was a water polo match between Hungary and the USSR at the 1956 Melbourne Olympics. The match took place on 6 December 1956 against the background of the 1956 Hungarian Revolution, and saw Hungary defeat the USSR 4–0. The name was coined after Hungarian player Ervin Zádor emerged during the last two minutes with blood pouring from above his eye after being punched by Soviet player Valentin Prokopov.

Tensions were already high between the Hungarian and Soviet water polo teams, as the Soviets had taken advantage of their political control of Hungary to study and copy the training methods and tactics of the Olympic champion Hungarians. [1]

Then, on 23 October 1956, a demonstration by students of the Budapest University of Technology and Economics escalated into an uprising against the government in Budapest. On 1 November, Soviet tanks began rolling into Hungary and from 4 to 10 November forces began suppressing the uprising with air strikes, artillery bombardments, and tank-infantry actions.

At the time, the Hungarian water polo team was in a mountain training camp above Budapest. They were able to hear the gunfire and see smoke rising. The players were the defending Olympic champions; with the Summer Olympics in Melbourne two months away, they were moved into Czechoslovakia to avoid being caught in the revolution. [2] The players only learned of the true extent of the uprising and the subsequent crackdown after arriving in Australia and they were all anxious for news of friends and family.

By the start of the Olympics, the uprising had been suppressed and many players saw the Olympics as a way to salvage pride for their country. "We felt we were playing not just for ourselves but for our whole country", said Zádor after the match. [3] The match was played in front of a partisan crowd bolstered with expatriate Hungarians (many of whom had been in the boxing arena before to see the Hungarian László Papp) [4] as well as Australians and Americans, two of the Soviet Union's Cold War opponents.

See also: Water polo at the 1956 Summer Olympics
A whistle came, I looked at the referee, I said 'What's the whistle for?' And the moment I did that, I knew I'd made a horrible mistake. I turned back and with a straight arm, he just smacked me in the face. He tried to punch me out. I saw about 4,000 stars. And I reached to my face and I felt warm blood pouring down. And I instantly said, 'Oh my God, I won't be able to play the next game.'

In the morning before the start, the Hungarians had created a strategy to taunt the Russians, whose language they had studied in school. In the words of Ervin Zádor: "We had decided to try and make the Russians angry to distract them." [6]

From the beginning, kicks and punches were exchanged. At one point, a punch thrown by Hungarian captain Dezső Gyarmati was caught on film. [6] Meanwhile, Zádor scored two goals to the crowd's cheers of Hajrá Magyarok! ("Go Hungarians!").

With one minute remaining in the match, Hungary was leading 4–0. Zádor was marking Valentin Prokopov, with whom he had already exchanged words, and a whistle was blown. In the intermission, Prokopov struck him, causing a bleeding gash. Zádor left the pool; his bleeding was the final straw for a crowd already in frenzy. Many angry spectators jumped onto the concourse beside the water, shook their fists, shouted abuse and spat at the Russians. [7] [8] [9] [10] [11] [12] To avoid a riot, police entered the arena and shepherded the crowd away.

Pictures of Zádor's injuries were published around the world, leading to the "Blood in the Water" moniker. [14] Reports that the water in the pool turned red were, however, an exaggeration. Zádor said his only thought was whether he would be able to play the next match. [15]

The referees stopped the match; Hungary was declared the winner since they had been leading. Hungary then beat Yugoslavia 2–1 in the final to win their fourth Olympic gold medal. Zádor's injury forced him to miss the match. After the event was completed, he and some of his teammates defected to the West. [1] [16] [17] [18] [19]

In 2006, for the 50th anniversary of the attempted Hungarian Revolution, the documentary Freedom's Fury , produced by Kristine Lacey and Thor Halvorssen, told the story of the match. [20] Quentin Tarantino described it as "the best untold story ever". [21] The documentary was narrated by the Olympic swimmer Mark Spitz, who, as a teenager had been coached by Ervin Zádor.

Also in 2006, a feature film about the match was released, entitled Children of Glory (Hungarian title: Szabadság, szerelem, meaning "Freedom, love", after the lines of Sándor Petőfi, the martyred poet of the 1848–49 revolution [ citation needed ]). The movie shows the Hungarian Revolution through the eyes of a player on the water polo team and a young woman who is one of the student leaders. It was directed by Krisztina Goda, and produced by Andrew G. Vajna. [22] The movie appeared in Hungarian cinemas on 23 October 2006, the 50th anniversary of the revolution. [23] On 29 October 2006, it was shown at the White House for President George W. Bush and guests (including Hungarian-American figures such as George Pataki, Governor of New York, and George A. Olah, Nobel Prize winner). [24]

The incident also features in the 1978 Australian film Newsfront . [25]

Ten nations competed in water polo at the 1956 Summer Olympics in Melbourne.

Ervin Zádor was a Hungarian water polo player and member of the Hungarian national team.

Hungary competed at the 1956 Summer Olympics in Melbourne, Australia, and Stockholm, Sweden. 108 competitors, 88 men and 20 women, took part in 80 events in 12 sports.

Although the Hungarian Revolution of 1956 failed in its efforts to oust the ruling Communist government of Hungary, the uprising provided inspiration for many artists, writers, poets, composers and filmmakers.

Final results for the water polo tournament at the 1952 Summer Olympics.

Dezső Gyarmati was a Hungarian water polo player and three-time Olympic champion; he later became the coach of the Hungarian national water polo team. Widely regarded as a "legendary player", Gyarmati was the most decorated player in the history of the sport. 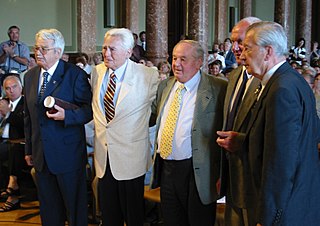 Miklós (Nick) Martin was a Hungarian water polo player who competed in the 1952 and 1956 Summer Olympics. He was born in Budapest. He died in Pasadena, CA.

Valentin Prokopov was a Russian water polo player who competed for the Soviet Union in the 1952 Summer Olympics and in the 1956 Summer Olympics. He became notorious for striking Hungarian player Ervin Zádor in the Blood in the Water match. 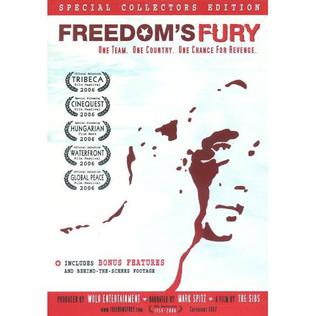 Freedom's Fury is a documentary film about the Melbourne, Australia 1956 Summer Olympics semifinal water polo match between Hungary and the USSR, and the events that led up to the violent battle, the match that what would later be known as the "Blood in the Water match."

Children of Glory, is a 2006 film directed by Krisztina Goda. Children of Glory commemorates Hungary's Revolution of 1956 and the "Blood in the Water" match. Taking place in Budapest and at the Melbourne Olympic Games in October and November of that year, the film takes viewers into the passion and sadness of one of the most dramatic popular revolts of the twentieth century. In the same year Soviet tanks were violently suppressing the Revolution within Hungary, the Hungarian water polo team was winning over Russia in the Olympic pool in Melbourne, in what is sometimes described as the bloodiest water polo match in history. While telling the story of 1956 in part through fictional lead characters, the film-makers simultaneously recreated many of the key public events of the Revolution, including the huge demonstrations and the fighting in the streets of Budapest.

Colin Keith Gray is a Canadian actor, writer and film director. He played Frank Hardy on the TV show The Hardy Boys for thirteen episodes. He is known for directing the documentary film Freedom's Fury.