Last updated October 15, 2020
This article is about the mountain range. For the associated ecoregion, see Blue Mountains (ecoregion).

The Blue Mountains are a mountain range in the western United States, located largely in northeastern Oregon and stretching into extreme southeastern Washington. The range has an area of about 15,000 square miles (38,850 km2), stretching east and southeast of Pendleton, Oregon, to the Snake River along the Oregon-Idaho border. [4] The Blue Mountains cover eight counties across two states; they are Union, Umatilla, Grant, Baker, and Wallowa counties in Oregon, and Walla Walla, Columbia and Garfield counties in Washington. [5] They are home to the world's largest organism and fungal mycelial mat, the Armillaria ostoyae. [6] The Blue Mountains were so named due to the color of the mountains when seen from a distance. [7]

Geologically, the Blue Mountains are part of the larger rugged Columbia River Plateau, located in the dry area of Oregon and Washington east of the Cascade Range. They are made up of several mountain ranges, from the Ochoco Mountains and Maury Mountains in the west near Prineville, Oregon, through the Greenhorn Mountains, the Aldrich Mountains, and the Strawberry Range, to the Elkhorn Mountains and Wallowa Mountains on the east and the Snake River in Hells Canyon. [14] [15] The tallest peaks are Sacajawea Peak at 9,843 feet (3,000 m) in the Wallowa Mountains, Rock Creek Butte at 9,106 feet (2,776 m) in the Elkhorn Mountains, and Strawberry Mountain at 9,042 feet (2,756 m) in the Strawberry Range. There are several more 9000'+ peaks in the Wallowas, but not elsewhere in the Blues. [16] [17]

The river valleys and lower levels of the range were occupied by indigenous peoples for thousands of years. Historic tribes of the region included the Walla Walla, Cayuse people and Umatilla, now acting together as the Confederated Tribes of the Umatilla Indian Reservation, located mostly in Umatilla County, Oregon. The southern portion of the Blue Mountains were inhabited by several different bands of the Northern Paiute, a Great Basin culture. Native American tribes originally migrated to the Blue Mountains for hunting and salmon runs. [18] The Natives used to purposefully burn small parts of the forest in order to create pastures to attract game for hunting. [7]

During westward expansion of the United States

In the mid-1800s, the Blue Mountains were a formidable obstacle to settlers traveling on the Oregon Trail and were often the last mountain range American pioneers had to cross before either reaching southeast Washington near Walla Walla or passing down the Columbia River Gorge to the end of the Oregon Trail in the Willamette Valley near Oregon City.

The range is currently traversed by Interstate 84, which crosses the crest of the range at a 4,193 feet (1,278 m) summit, from south-southeast to north-northwest between La Grande and Pendleton. The community of Baker City is located along the south-eastern flank of the range. U.S. Route 26 crosses the southern portion of the range, traversing the Blue Mountain Summit and reaching an elevation of 5,098 feet (1,554 m).

It is also crossed by the Union Pacific Railroad's mainline between Portland, Oregon and Pocatello, Idaho, which crests the summit at Kamela, Oregon. The summit lies on Union Pacific's La Grande Subdivision, which runs between La Grande and Hinkle, the latter of which is the site of a major UP yard.

The Blue Mountains in Washington are home to one of 10 identified elk herds in the state, with a population of approximately 4,500 Rocky Mountain elk as of 2018 across the region. [19] In 1989, in response to a decline in the elk population and a heavy female-biased population, the Washington Fish & Wildlife Department regulated elk hunting in the Washington Blue Mountains with a "spike-only" general hunting season, permitting hunting of only male elk with at least one visible non-branched antler. [19] By the mid 1990s the area then became known for its mature males and trophy hunting. [20] In 2018, Washington State proposed an updated elk management plan intended to improve the health of elk populations and habitats, reduce human conflict and agricultural damage, and managing elk populations for recreational, educational, scientific, and ceremonial purposes. [19]

During winter months elk will prefer to use "moderately steep south slopes" rather than northern slopes because of the southern slopes being warmer and containing less snow. [21]

The public lands in the Blue Mountains are managed not only by the United States Forest Service and the Bureau of Land Management, but also by land owners and the Confederated Tribes of the Umatilla Indian Reservation.

Columbia County is a county located in the U.S. state of Washington. As of the 2010 census, the population was 4,078, making it the third-least populous county in Washington. The county seat and largest city is Dayton. The county was created out of Walla Walla County on November 11, 1875 and is named after the Columbia River.

Umatilla County is a county located in the U.S. state of Oregon. As of the 2010 census, the population was 75,889. The county seat is Pendleton, but the largest city is Hermiston. The county is named for the Umatilla River.

Walla Walla, sometimes Waluulapam, are a Sahaptin indigenous people of the Northwest Plateau. The duplication in their name expresses the diminutive form. The name Walla Walla is translated several ways but most often as "many waters." 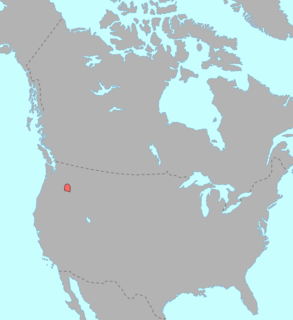 The Cayuse are a Native American tribe in what is now the state of Oregon in the United States. The Cayuse tribe shares a reservation and government in northeastern Oregon with the Umatilla and the Walla Walla tribes as part of the Confederated Tribes of the Umatilla Indian Reservation. The reservation is located near Pendleton, Oregon, at the base of the Blue Mountains.

Eastern Oregon is the eastern part of the U.S. state of Oregon. It is not an officially recognized geographic entity; thus, the boundaries of the region vary according to context. It is sometimes understood to include only the eight easternmost counties in the state; in other contexts, it includes the entire area east of the Cascade Range. Cities in the basic eight-county definition include Baker City, Burns, Hermiston, Pendleton, John Day, La Grande, and Ontario. Umatilla County is home to the largest population base in Eastern Oregon; accounting for 74% of the region's population in 2016. Hermiston, located in Umatilla County, is the largest city in the region. Major industries include transportation/warehousing, timber, agriculture and tourism. The main transportation corridors are I-84, U.S. Route 395, U.S. Route 97, U.S. Route 26, U.S. Route 30, and U.S. Route 20.

The Grande Ronde River is a tributary of the Snake River, 182 miles (293 km) long, in northeastern Oregon and southeastern Washington in the United States. It drains an area southeast of the Blue Mountains and northwest of the Wallowa Mountains, on the Columbia Plateau. It flows through the agricultural Grande Ronde Valley in its middle course and through a series of scenic canyons in its lower course. 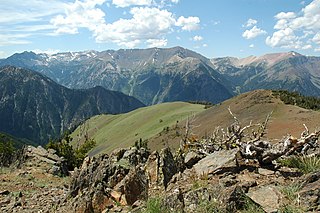 The Wallowa Mountains are a mountain range located in the Columbia Plateau of northeastern Oregon in the United States. The range runs approximately 40 miles (64 km) northwest to southeast in southwestern Wallowa County and eastern Union County between the Blue Mountains to the west and the Snake River to the east. The range is sometimes considered to be an eastern spur of the Blue Mountains, and it is known as the "Alps of Oregon". Much of the range is designated as the Eagle Cap Wilderness, part of the Wallowa–Whitman National Forest. 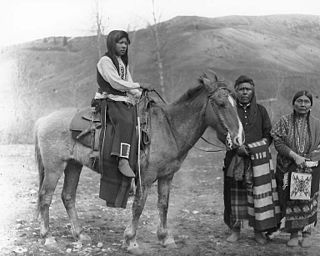 The Umatilla are a Sahaptin-speaking Native American tribe who traditionally inhabited the Columbia Plateau region of the northwestern United States, along the Umatilla and Columbia rivers.

The Confederated Tribes of the Umatilla Indian Reservation are the federally recognized confederations of three Sahaptin-speaking Native American tribes who traditionally inhabited the Columbia River Plateau region: the Cayuse, Umatilla, and Walla Walla.

The Tucannon River is a tributary of the Snake River in the U.S. state of Washington. It flows generally northwest from headwaters in the Blue Mountains of southeastern Washington to meet the Snake 4 miles (6 km) upstream from Lyons Ferry Park and the mouth of the Palouse River. The Tucannon is about 62 miles (100 km) long. Part of the upper river flows through the Wenaha–Tucannon Wilderness. 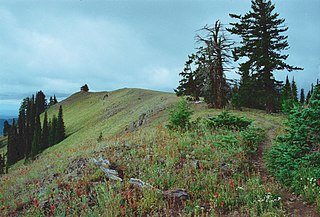 The Umatilla National Forest, in the Blue Mountains of northeast Oregon and southeast Washington, covers an area of 1.4 million acres (5,700 km2). In descending order of land area the forest is located in parts of Umatilla, Grant, Columbia, Morrow, Wallowa, Union, Garfield, Asotin, Wheeler, and Walla Walla counties. More than three-quarters of the forest lies in the state of Oregon. Forest headquarters are located in Pendleton, Oregon. There are local ranger district offices in Heppner and Ukiah in Oregon, and in Pomeroy and Walla Walla in Washington.

The North Fork Umatilla Wilderness is a wilderness area located inside the Umatilla National Forest, in the Blue Mountains of northeastern Oregon. It is the smallest wilderness in northeast Oregon, encompassing only 20,144 acres (8,152 ha) in Umatilla and Union counties.

The Wenaha–Tucannon Wilderness is a federally designated wilderness area in the Blue Mountains of northeastern Oregon, and southeastern Washington, United States. It was created by the Endangered American Wilderness Act of 1978 and encompasses 177,423 acres (71,801 ha) in the Umatilla National Forest — 66,375 acres (26,861 ha) in Oregon and 111,048 acres (44,940 ha) in Washington. 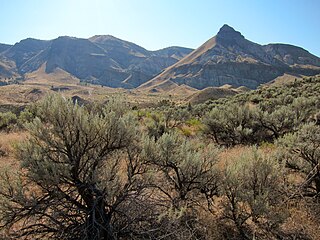 Sacajawea Peak is a peak in the Wallowa Mountains, in the U.S. state of Oregon. It is in the Eagle Cap Wilderness and the Wallowa–Whitman National Forest.