Brodhead attended Duke University, where he played quarterback on the Duke Blue Devils football team. During that time he led the Blue Devils to the 1958 Orange Bowl and shared the quarterback position with Sonny Jurgensen.

Brodhead was drafted by the Cleveland Browns in 1958 but went on active duty in the armed services before being able to join the Browns. After his discharge, he played for the Saskatchewan Roughriders of the Canadian Football League (CFL) in 1959, as backup to Don Allard. In 1960, he signed with the upstart Buffalo Bills of the fledgling American Football League (AFL). He played one season, in 1960, for the Bills, starting one game and scoring two points before having a brief stint with the CFL's Edmonton Eskimos. In 1961, he embarked on a career in minor league football with the Canton Bulldogs and Cleveland Bulldogs in the United Football League and then, in 1965 and 1966 with the Philadelphia Bulldogs of the Continental Football League. He led the Bulldogs to the Continental Football League title in 1966 with a win over the Orlando Panthers, and then, at age 29, was named business manager of the Cleveland Browns.

Brodhead was elected to the Minor League Football Hall of Fame for his career with the Canton/Cleveland/Philadelphia Bulldogs.

Brodhead remained with the Browns until 1970, when he was named general manager of the Houston Oilers. He later became the CFO of the Miami Dolphins before heading to LSU as athletic director (AD) in 1981. He was hired by LSU for his financial acumen after deposed athletic director Paul Dietzel created a million-dollar budget deficit.

Brodhead hired baseball coach Skip Bertman, who revived the moribund program and took the Bayou Bengals to unprecedented heights, guiding LSU to five national championships (1991, 1993, 1996, 1997, 2000) and 11 trips to the College World Series in 18 seasons (1984-2001). Bertman became LSU's athletic director upon his retirement from the diamond, remaining in the position through June 2008.

In football, Brodhead inherited coach Jerry Stovall, an LSU All-American running back and safety in the early 1960s, and fired him following a 4-7 season in 1983. Stovall lost three of his last four games in 1982 and was a winless 0-6 in the Southeastern Conference in 1983. Brodhead replaced Stovall with Bill Arnsparger, the architect of the Miami Dolphins' "No-Name Defense" of the early 1970s. Arnsparger went 26-8-3 in three seasons and coached LSU to the 1986 SEC championship and two Sugar Bowl berths. By comparison, Stovall was 0-6 in the SEC in his third year while Arnsparger won the SEC championship in his third year.

Brodhead later was a radio personality in Baton Rouge, Louisiana and for a time the AD at Southeastern Louisiana University in nearby Hammond. 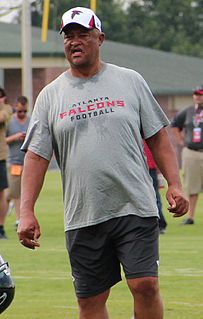 Terrance Joseph "Terry" Robiskie is an American football coach and former player who is the running backs coach of the Jacksonville Jaguars of the National Football League (NFL). He has also served as an assistant coach for the Buffalo Bills, Tennessee Titans, Atlanta Falcons, Miami Dolphins, Cleveland Browns, Washington Redskins, and Los Angeles Raiders. 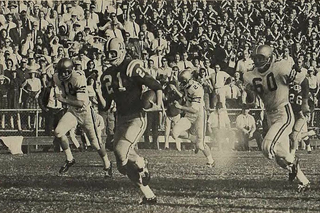 Mike Archer is an American football coach and former player. He is currently the defensive coordinator for the Tampa Bay Vipers. From 1987 to 1990, Archer was the head football coach at Louisiana State University, where he compiled a record of 27–18–1. Archer has also served as an assistant coach at his alma mater University of Miami, the University of Virginia, and the University of Kentucky, the Pittsburgh Steelers of the National Football League (NFL), and with the Toronto Argonauts of the Canadian Football League (CFL).

The LSU Tigers baseball team represents Louisiana State University in NCAA Division I college baseball. The team participates in the West Division of the Southeastern Conference. It is one of the elite college baseball programs in the nation, ranking seventh all-time with 18 College World Series appearances and second all-time with six national championships. The Tigers play home games on LSU's campus at Alex Box Stadium, Skip Bertman Field, and they are currently coached by Paul Mainieri.

Raymond Peter "Smoke" Laval is an American college baseball coach who was the head coach of the University of North Florida Ospreys. He is a former head coach of the Louisiana State University Tigers and the University of Louisiana at Monroe Indians baseball teams. He has led his teams to two College World Series, five conference championships, and seven NCAA Division I Baseball Championship appearances, and has received a number of coaching awards. 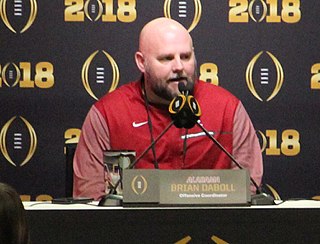 The 1987 Sugar Bowl was the 53rd edition of the college football bowl game, played at the Louisiana Superdome in New Orleans, Louisiana, on Thursday, January 1. Part of the 1986–87 bowl game season, it featured the fifth-ranked LSU Tigers of the Southeastern Conference (SEC) and #6 Nebraska Cornhuskers of the Big Eight Conference. Favored Nebraska trailed early and won, 30–15. 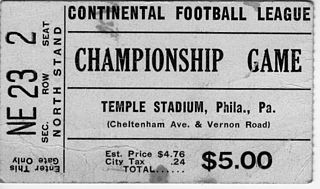 Andrew John Bond II is a former American football quarterback. He was the starting quarterback for the Mississippi State Bulldogs in 1980, 1981, 1982, and 1983. He played in the wishbone offense under head coach Emory Bellard.

Timothy Chase "T.C." McCartney is an American football coach who is currently an offensive assistant for the Cleveland Browns of the National Football League (NFL). He was previously the quarterbacks coach for the Denver Broncos.