Jackson also played for in the Continental Football League for three seasons for the Orange County Ramblers (1967-1968) and the Portland Loggers (1969). He won the league Most valuable player award for the 1967 season. 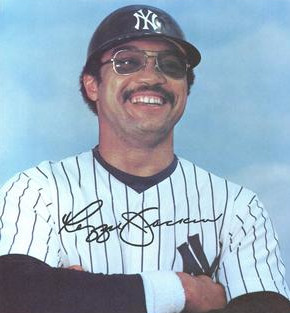 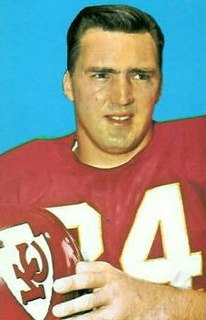 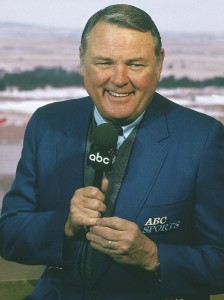 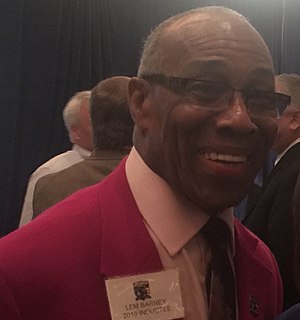 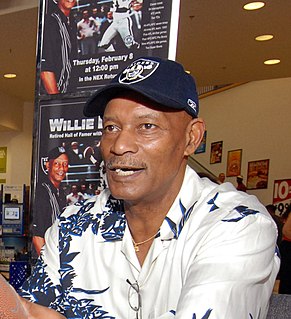 Jack Thomas Snow was an American football player who played wide receiver at the University of Notre Dame from 1962 through 1964 and with the Los Angeles Rams of the NFL from 1965 to 1975.

Lawrence Curtis Jackson was an American right-handed professional baseball pitcher, who played in Major League Baseball (MLB) for the St. Louis Cardinals, Chicago Cubs, and Philadelphia Phillies from 1955 to 1968. In 1964, Jackson led the National League (NL) with 24 wins, and was runner-up in the Cy Young Award voting; he also led the NL in innings pitched and shutouts, once each. 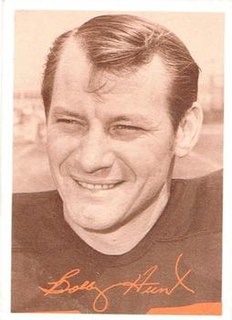 Robert Kenneth "Bobby" Hunt is a former American Professional Football defensive back who played in the American Football League (AFL). He played collegiately at Auburn University. He was drafted by the Dallas Texans of the AFL in 1962 and went on to play in the AFL for the Texans, Kansas City Chiefs, and the Cincinnati Bengals between 1962 and 1969. He was first team All-AFL his rookie year with the Texans. Hunt had ten interceptions in 1966 and during his nine-year career he had forty-two, returning one for a touchdown. He was second team All-AFL in 1964 & 1966, and was selected to play in the AFL All-Star game in 1964. He was an AFL Champion with the Chiefs in 1962 and in 1967, when he played for them in the first AFL-NFL World Championship game. After his playing career he was an assistant coach with the Buffalo Bills for 2 seasons. Hunt is a member of the Alabama Sports Hall of Fame class of 2015.

Richard Samuel Jackson is a former American football player. He played college football for Southern University. Jackson played for the American Football League's Oakland Raiders in 1966 and the AFL Denver Broncos from 1967 through 1969. He played for the NFL Broncos in 1970 through 1971, and the NFL Cleveland Browns in 1972. Jackson was All-Pro in 1969 and 1970.

Thomas Arthur Keating was an American football player who played at the defensive tackle position. He played college football for the University of Michigan from 1961 to 1963. He also played 12 seasons of professional football in the American and National Football Leagues from 1964 to 1975. He was an AFL All-Star in 1966 and 1967, a key to the 1967 Oakland Raiders' defensive line that led the team to a 13-1 record and the 1967 AFL Championship, and was considered "the premier tackle in the old American Football League". He was known for his use of a distinctive four-point stance in which he lined up with both hands on the ground.

Willie Louis Richardson was an American professional football wide receiver who played in the National Football League. He played nine seasons for the Baltimore Colts and the Miami Dolphins (1970). He was named 1st Team All-Pro by the Associated Press for the 1967 NFL season and went to two Pro Bowls.

Frank Kramer (1905–1993) was an American artist known chiefly for his illustrations for Jack Snow's two Oz books, The Magical Mimics in Oz and The Shaggy Man of Oz, founded on and continuing the famous Oz stories by L. Frank Baum. He also illustrated Robert A. Heinlein's Solution Unsatisfactory, Maureen Daly's Twelve Around the World, and many of Caary Paul Jackson's sports novels for children, including the Bud Baker series.

Johnnie Bobby Jackson is a former professional American football cornerback in the National Football League. He attended Harlingen (Texas) High School from 1981 to 1985 and played quarterback. He played four seasons with the San Francisco 49ers (1989–1992) and the Green Bay Packers (1992).

Ron Corry is an Australian former football (soccer) player and coach. He played as a goalkeeper for Australia before entering a coaching career. He is the Goalkeeping coach of Western Sydney Wanderers.