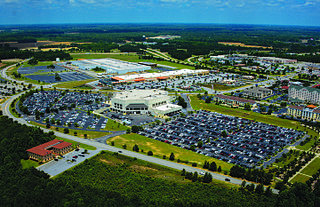 Florence is a city in, and the county seat of, Florence County, South Carolina, United States. It is located at the intersection of Interstate 95 and Interstate 20 and is the eastern terminus of the latter. It is the county seat of Florence County and the primary city within the Florence metropolitan area. The area forms the core of the historical "Pee Dee" region of South Carolina, which includes the eight counties of northeastern South Carolina, along with sections of southeastern North Carolina. As of the 2010 census, the population of Florence was 37,056, and the estimated population in 2019 was 38,531.

Alistair is a masculine given name. It is an Anglicised form of the Scottish Gaelic Alasdair. The latter is most likely a Scottish Gaelic corruption of the Norman French Alexandre or Latin Alexandrus, which was incorporated into English as Alexander. The deepest etymology is the Greek Ἀλέξανδρος (man-repeller): ἀλέξω (repel) + ἀνήρ (man), "the one who repels men", a warrior name. Another, not nearly so common, Anglicisation of Alasdair is Allaster. 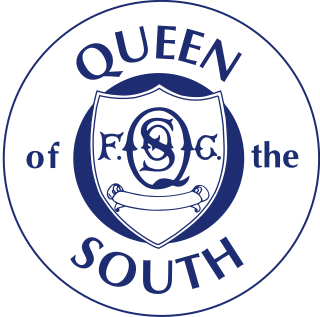 Queen of the South Football Club are a Scottish professional football club formed in March 1919 and located in Dumfries. The club plays in the Scottish Championship, the second tier of Scottish football. They are officially nicknamed The Doonhamers but are usually referred to as Queens or QoS. Their home ground since their formation has been Palmerston Park.

Alistair Reid "Ally" MacLeod was a Scottish professional football player and manager. He is perhaps best known for his time as the Scotland national football team manager, including their appearance at the 1978 FIFA World Cup. MacLeod played as a left winger for Third Lanark, St Mirren, Blackburn Rovers, Hibernian and Ayr United. He then managed Ayr United, Aberdeen, Scotland, Motherwell, Airdrieonians and Queen of the South.

Mary Jane McLeod Bethune was an American educator, stateswoman, philanthropist, humanitarian, womanist, and civil rights activist. Bethune founded the National Council for Negro Women in 1935, established the organization's flagship journal Aframerican Women's Journal, and resided as president or leader for myriad African American women's organizations including the National Association for Colored Women and the National Youth Administration's Negro Division. She also was appointed as a national adviser to president Franklin D. Roosevelt, whom she worked with to create the Federal Council on Negro Affairs, also known as the Black Cabinet. She is well known for starting a private school for African-American students in Daytona Beach, Florida; it later continued to develop as Bethune-Cookman University. Bethune was the sole African American woman officially a part of the US delegation that created the United Nations charter, and she held a leadership position for the Women's Army Auxiliary Corps. For her lifetime of activism, she was deemed "acknowledged First Lady of Negro America" by Ebony magazine in July 1949 and was known by the Black Press as the "Female Booker T. Washington". She was known as "The First Lady of The Struggle" because of her commitment to gain better lives for African Americans.

Frederick Robertson McLeod was a Scottish-American professional golfer who had a distinguished career in the United States, which included victory in the 1908 U.S. Open. He was born in Kirk Ports, North Berwick, East Lothian, Scotland.

Hawick Rugby Football Club is an amateur rugby union side, currently playing in the Scottish Premiership and Border League. The club was founded in 1885 and are based at Mansfield Park at Hawick in the Scottish Borders.

John Murdoch MacLeod is a Scottish former footballer, who played as a winger.

Izale Michael McLeod is an English professional footballer who plays as a forward for Kempston Rovers. He has played in The Football League for Derby County, Milton Keynes Dons, Charlton Athletic, Barnet, Portsmouth, Crawley Town, Notts County, Yeovil Town and Wrexham. He also played for England U21. 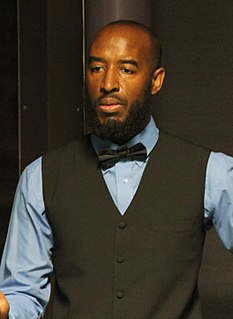 The Kell antigen system is a group of antigens on the human red blood cell surface which are important determinants of blood type and are targets for autoimmune or alloimmune diseases which destroy red blood cells. Kell can be noted as K, k, or Kp. The Kell antigens are peptides found within the Kell protein, a 93-kilodalton transmembrane zinc-dependent endopeptidase which is responsible for cleaving endothelin-3.

McLeod syndrome is an X-linked recessive genetic disorder that may affect the blood, brain, peripheral nerves, muscle, and heart. It is caused by a variety of recessively inherited mutations in the XK gene on the X chromosome. The gene is responsible for producing the Kx protein, a secondary supportive protein for the Kell antigen on the red blood cell surface. 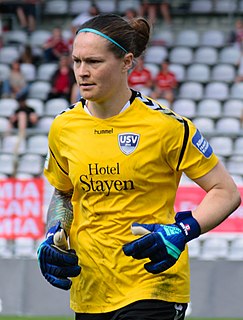 Erin Katrina McLeod is a Canadian soccer player who plays as a goalkeeper for NWSL club Orlando Pride and has represented Canada internationally. She first appeared for the Canada women's national soccer team at the 2002 Algarve Cup and has since made 118 appearances for the team. In 2012, as part of the Canadian Soccer Association's Centennial Celebration, she was honoured on the All-Time Canada XI women's team.

James Franklin is an American professional Canadian football quarterback who is currently playing for the Saskatchewan Roughriders of the Canadian Football League (CFL). He played college football at Missouri. He was the Tigers' starting quarterback from 2011 to 2013. He has also been a member of the Detroit Lions, Edmonton Eskimos and Toronto Argonauts.

Rodney McLeod Jr. is an American football safety for the Philadelphia Eagles of the National Football League (NFL). McLeod played college football for the University of Virginia and signed with the St. Louis Rams as an undrafted free agent in 2012.

George James McLeod was a Scottish professional football winger who played in the Football League for Luton Town, Brentford and Queens Park Rangers.