A graduate of University of Minnesota, Sandberg joined the Winnipeg Blue Bombers in 1947. [1] His rookie season was spectacular, as he led the league in scoring, was an all-star, and won the Jeff Nicklin Memorial Trophy as western MVP. [2] [3] His season was capped with a dramatic and heartbreaking Grey Cup defeat. Having played a phenomenal game in the 35th Grey Cup, scoring the Bombers only touchdown, he tried a fake kick in the last minute with the score tied and it didn't work; the Toronto Argonauts won a classic nail-biter 10-9. [4] [5]

His 1948 season was a disappointment, falling to sixth in league scoring, [6] and 1949 was plagued by injuries, leading him to retire. [7] He attempted a comeback with the Saskatchewan Roughriders in 1951, but rushed for only 138 yards and scored only 1 touchdown and missed the Grey Cup game due to the Canadian Rugby Union import rule. [8] [9] 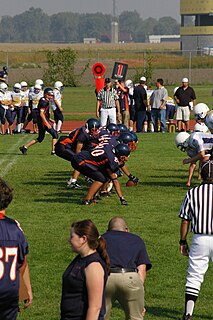 After his career in football, Sandberg practiced as an architect in Hibbing, Minnesota, heading his own firm Robert Y. Sandberg & Assocs. Inc; he was a member of the American Institute of Architects. [10] He retired in 1990 and died on May 8, 2015. [11]

Hibbing is a city in Saint Louis County, Minnesota, United States. The population was 16,361 at the 2010 census. The city was built on the rich iron ore of the Mesabi Iron Range. At the edge of town is the largest open-pit iron mine in the world, the Hull–Rust–Mahoning Open Pit Iron Mine. U.S. Highway 169, State Highway 37, State Highway 73, Howard Street, and 1st Avenue are five of the main routes in Hibbing. The Range Regional Airport offers daily commercial flights between Hibbing and Minneapolis-St. Paul, as well as hosting many private pilots and the Minnesota Department of Natural Resources fire fighting aircraft.

The 2007 CFL season was the 54th season of modern Canadian professional football. Officially, it was the 50th season of the league, and many special events were held to commemorate the event. Regular-season play began on June 28, 2007 at the Rogers Centre in Toronto, Ontario and concluded on Saturday, November 3, 2007. The playoffs began on Sunday, November 11, 2007, and ended with the championship game, the 95th Grey Cup, at the Rogers Centre in Toronto, on November 25, 2007, with the Saskatchewan Roughriders as champion.

Events in Canadian football in 1952.

Michael Allen is a former Canadian football defensive back who played seven seasons in the Canadian Football League (CFL) with the Winnipeg Blue Bombers, Ottawa Rough Riders and BC Lions. He was drafted by the Blue Bombers in the fourth round of the 1988 CFL Draft. He played CIS football at Carleton University. Allen won three Grey Cup championships, two with the Blue Bombers and one with the Lions.