Robert Cornelius Murphy (born July 19, 1988) is an American Internet entrepreneur and software engineer. He is the co-founder and the CTO of the American multinational technology and social media company Snap Inc., which he created (as Snapchat Inc.) with Evan Spiegel and Reggie Brown while they were students at Stanford University.

He was named as one of "100 Most Influential People in 2014" by Time. In 2015, Murphy was first listed and became the second-youngest billionaire in the world by Forbes.

Murphy grew up in Berkeley, California and was educated at the School of the Madeleine, a private Roman Catholic grade school there. He received his secondary education at Saint Mary's College High School, also a private Catholic high school in Berkeley. [5]

Murphy graduated in 2010 from Stanford University in Stanford, California, where he received a Bachelor of Science degree in mathematical and computational Science. [6] He was also a member of the Kappa Sigma fraternity along with Evan Spiegel and Reggie Brown. [7] [8]

Murphy was recruited by Spiegel after they finished working on a failed startup called Future Freshman, a website that helped high school kids get advice when applying to colleges. [6] [9] In 2011, Murphy co-founded a disappearing-image messaging app called Picaboo. The name was later changed to Snapchat. [10] [11] After graduating from Stanford, Murphy spent a year working as a software engineer at Revel Systems (an iPad point of sale system for restaurants). Until Snapchat could secure venture capital funding, he used half of his paycheck to cover the cost of Snapchat's server bills. [12] [13]

At Snapchat, Murphy has led the engineering and research teams. [13] Murphy has also worked with Snapchat's Snap Labs team, which produced Spectacles camera glasses in 2018. [14] [15] At the time of Snapchat's IPO in 2017, Murphy and Spiegel held over 45% of the company's total stock. They also held over 70% of the voting power. [16]

In February 2017, Murphy and Spiegel pledged to donate up to 13,000,000 shares of Class A common stock to their newly created Snap Foundation, which will support the arts, education and youth non-profits, over the course of 15–20 years. [17] [18]

John Carl Malone is an American billionaire businessman, landowner and philanthropist. He was chief executive officer (CEO) of Tele-Communications Inc. (TCI), a cable and media giant, for twenty-four years from 1973 to 1996. Malone is now chairman and largest voting shareholder of Liberty Media, Liberty Global, and Qurate Retail Group, and also owns 7% of Lionsgate and Starz Inc.. He was interim CEO of Liberty Media, until succeeded by former Microsoft and Oracle CFO Greg Maffei. By most estimates, Malone is the largest private landowner in the United States, possessing upwards of 2.2 million acres, more than twice the size of Rhode Island.

David Ross Cheriton is a Canadian computer scientist, mathematician, billionaire businessman, philanthropist, and venture capitalist. He is a computer science professor at Stanford University, where he founded and leads the Distributed Systems Group.

Nick Bell is a founding partner at Attention Capital and former vice president of content at Snap Inc., parent company of Snapchat, where he reported directly to CEO Evan Spiegel. Prior to Snap, Bell was Senior Vice President of Digital at News Corporation.

Lightspeed Venture Partners is a global venture capital firm focusing on multi-stage investments in the enterprise technology, consumer, and health sectors. Over the past two decades, the firm has backed more than 400 companies, including Snapchat, Affirm, MuleSoft, and AppDynamics. 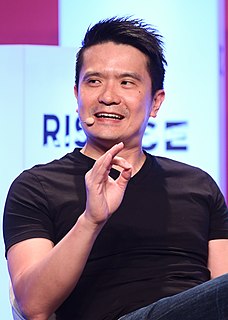 Min-Liang Tan or Tan Min Liang is a Singaporean entrepreneur and former lawyer. He is best known as the co-founder, chief executive officer (CEO) and creative director of gaming hardware company, Razer Inc., and CEO of THX. He oversees the design and development of all Razer products. Tan was a lawyer before he co-founded Razer with Robert Krakoff.

Stephen A. Miles is an author and executive consultant, and Founder and Chief Executive Officer of The Miles Group, as well as a director at CDK Global, where he serves as a member of the Compensation and Nominating & Governance Committees. Previously, he was a Vice Chairman at Heidrick & Struggles, where he ran Leadership Advisory Services and was a member of both the Global CEO and Board Practice, and the firm's management committee. 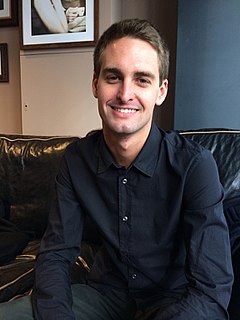 Evan Thomas Spiegel is an American businessman who is the co-founder and CEO of the American social media company Snap Inc., which he created with Bobby Murphy and Reggie Brown while they were students at Stanford University. Spiegel was the youngest billionaire in the world in 2015.

Brian Acton is an American computer programmer and Internet entrepreneur. Acton is the executive chairman of the Signal Foundation, which he co-founded with Moxie Marlinspike in 2018.

Emily C. White is an American technology executive and president of Anthos Capital, a private equity and venture capital firm focused on consumer-oriented companies. She is the former chief operating officer of Snapchat Inc and former director of business operations at Instagram. White served as the COO of Snapchat from 2013 to 2015, when she stepped down to work on other projects. In 2016, White founded Mave, a personal concierge startup. She has served as a board member of Hyperloop One, a transportation technology company.

Spectacles are smartglasses dedicated to recording video for the Snapchat service. They feature a camera lens and are capable of recording short video segments and syncing with a smartphone to upload to the user's online account. They were developed and manufactured by Snap Inc., and announced on September 23, 2016. The smartglasses were released on November 10, 2016. They are made for Snap's image messaging and multimedia platform, Snapchat, and were initially distributed exclusively through Snap's pop-up vending machine, Snapbot. On February 20, 2017, Snap Spectacles became available for purchase online.

Imran Khan is a technology executive, entrepreneur and investor. He is the Chief Strategy Officer of the American multinational technology and social media company Snap Inc., where he helped lead the company to IPO as well as build up the operation, sales, expand business partnerships and manage overall corporate strategy. Before joining Snap Inc. in 2015, Khan was the head of global internet investment banking at Credit Suisse where he has a leading role on Chinese e-commerce giant Alibaba's IPO, the largest share sale ever.

Eric Subrah Yuan is a Chinese-American billionaire businessman, engineer, and the CEO and Founder of Zoom Video Communications, of which he owns 22%.