After graduating from Benedictine High School in 1955, Ross enrolled at the Virginia Military Institute, where he started at quarterback and defensive back for two seasons and served as captain of the football team as a senior. Ross graduated from VMI in 1959 with a Bachelor of Arts degree in English and history.

Following a tour of duty in the United States Army as a first lieutenant (1960–1962), Ross found work coaching high school football. He coached at Colonial Heights High School, and at his own nearby alma mater of Benedictine, both located near Richmond, Virginia. He then moved on to coaching at the college level, starting with assistant coaching stints at William & Mary, Rice, and Maryland before accepting his first head coaching job in 1973 at The Citadel, The Military College of South Carolina, located in Charleston, South Carolina.

Ross then spent four years as an assistant coach with the Kansas City Chiefs (1978–1981) under head coach Marv Levy, [2] before returning to the collegiate ranks as head coach at Maryland. He won three consecutive Atlantic Coast Conference (ACC) Championships from 1983 to 1985. After four years, Ross left Maryland and was introduced as head coach of the Georgia Tech Yellow Jackets football team. on Jan. 5, 1987. As head coach of Georgia Tech in 1990, he led the Jackets to an 11–0–1 record and the ACC championship—the school's first conference title since 1952, while they were still in the Southeastern Conference. They also won a share of the national championship by finishing first in the final Coaches' Poll. Ross won the Paul "Bear" Bryant Award and the Bobby Dodd Coach of the Year Award. [3] [4] [5]

He then left to become head coach of the San Diego Chargers, [6] where the highlight of his tenure would be an AFC Championship and San Diego's first trip to the Super Bowl after the 1994 season where they fell to the 49ers, 49–26. Ross' first season in San Diego (1992) saw the Chargers drop the first four regular season games, but they recovered to win 11 of their final 12 games to win the AFC West, their first division title since 1981. [2] In his five seasons with the Chargers, they won two division titles and made the playoffs three times. His regular season coaching record with the Chargers was 47–33, and 3–3 in the playoffs.

Following the 1996 season, Ross left the Chargers to take a more lucrative, and perhaps more rewarding position as the head coach of the Detroit Lions, where he would have control of all player personnel decisions and be able to hire his own staff. He held the position until the middle of the 2000 season. Detroit had long been considered underachievers under Wayne Fontes, and Ross was brought in to provide the team a more structured atmosphere. It was a challenging endeavor, as Detroit had developed somewhat of a "country club" atmosphere under Fontes' leadership, and veteran players on the roster ultimately came to resent Ross for running tougher practices, instilling weight requirements, curfews, etc. Ross sought to change the identity of the Detroit Lions, having them become a more traditional, physical, football team, less dependent on Hall of Fame running back Barry Sanders for success.

He structured his drafts accordingly, drafting highly regarded college offensive linemen such as Stockar McDougle and Aaron Gibson, neither of which panned out professionally. Ultimately, Ross was unable to change the culture in Detroit. He became frustrated at what he perceived to be the team's lack of effort, accusing them of just playing for their paychecks. [7] In November 2000, following a home loss to the Miami Dolphins, having had enough of what he called his team's unwillingness to "fight back," he resigned in mid-season. [8] Although his frustration with the Lions organization was evident, Ross later claimed that his primary reason for leaving when he did was due to blood clots in his legs. [2] It is also noteworthy to mention that the 1999 Detroit team achieved the playoffs—albeit with an 8–8 record after losses in the final four regular season games, plus a first-round exit against the Washington Redskins—despite the unexpected retirement of Barry Sanders prior to training camp.

Ross and his wife, Alice, have three sons, two daughters, and 18 grandchildren. Their sons Chris and Kevin graduated from the United States Air Force Academy and United States Naval Academy, in 1984 and 1988, respectively. Kevin served for a time as Army's offensive coordinator and running backs coach under his father, but was not kept in that post under Ross's replacement, Stan Brock. Chris is currently the coach for Fairfax Home School's varsity soccer team, based in Fairfax, Virginia. [12] [13]

In 1997, Ross was inducted into the Virginia Sports Hall of Fame.

Ralph Harry Friedgen is an American football coach. He was most recently the special assistant coach for Rutgers after serving as the offensive coordinator in the 2014 season. He was the head coach at the University of Maryland, College Park from 2000 to 2010. After the 2010 regular season, it was announced that Friedgen would not be returning for the 2011 season, ending his ten-year run as head coach. Friedgen was previously an offensive coordinator at Maryland, Georgia Tech, and in the National Football League (NFL) with the San Diego Chargers.

The 2001 NFL season was the 82nd regular season of the National Football League (NFL). In the wake of the September 11 attacks, the NFL's week 2 games were postponed and rescheduled to the weekend of January 6 and 7, 2002. In order to retain the full playoff format, all playoff games, including Super Bowl XXXVI, were rescheduled one week later. The New England Patriots won the Super Bowl, defeating the St. Louis Rams 20–17 at the Louisiana Superdome.

Daniel Ernest Henning, is a former American football player and coach. A quarterback, he played college football at the College of William & Mary and professional football in 1966 for the San Diego Chargers of the American Football League (AFL). Henning served as a head coach in the National Football League (NFL) for the Atlanta Falcons (1983–1986) and the Chargers (1989–1991). He was the head football coach at Boston College from 1994 to 1996. Henning then returned to the NFL as an offensive coordinator for the Buffalo Bills in 1997. After Hall of Fame coach Marv Levy retired, reportedly partially due to his reluctance to fire Henning, Henning left Buffalo.

William J. Lewis is a former American football player and coach. He served as the head football coach at the University of Wyoming (1977–1979), East Carolina University (1989–1991), and the Georgia Institute of Technology (1992–1994), compiling a career college football record of 45–52–2. Lewis was a defensive assistant at many schools and most notably served as an assistant to Vince Dooley at the University of Georgia, helping win a National Championship in 1980. 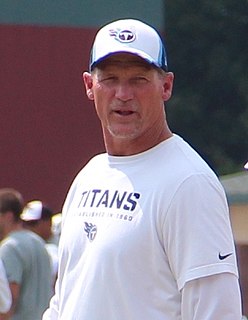 Kenneth Moore Whisenhunt is an American football coach and former tight end. He played college football at Georgia Tech and was drafted in the twelfth round of the 1985 NFL Draft by the Atlanta Falcons, with whom he played for four years. He subsequently played two more years with the Washington Redskins and another two with the New York Jets.

William E. Peterson was an American football player, coach, and college athletics administrator. His career included head coaching stops at Florida State University, Rice University and with the Houston Oilers of the National Football League (NFL). Considered one of the unique characters in college sports, Peterson is credited with bringing the pro passing game to college football. He is also known as the "Coach of Coaches", having tutored such coaches as Joe Gibbs, Bill Parcells, Bobby Bowden, Don James, Dan Henning, Ken Meyer and many others. Coach "Pete", as he was known, is also remembered for his reshaping of the English language. One of his more novel expressions was to have his team "pair off in groups of threes, then line up in a circle." Beyond his trials with syntax, Peterson is best remembered for bringing the Seminoles to the forefront of college football, using pro-style offenses and a much feared passing game.

Joseph J. Krivak was an American football player and coach. He served as head coach for the Maryland Terrapins football team from 1987 to 1991, where he compiled a 20–34–2 record. He also served as an assistant coach at Maryland, Syracuse, Navy, and Virginia. As a coach at Maryland, Krivak mentored future National Football League (NFL) quarterbacks Boomer Esiason, Neil O'Donnell, Frank Reich, Stan Gelbaugh, and Scott Zolak. In all, he coached on seven Atlantic Coast Conference (ACC) championship team staffs and in 14 bowl games as an assistant or head coach.

Alfred Theodore Tollner is a former American football player and coach. He had served as the head coach at the University of Southern California (USC) from 1983 to 1986 and San Diego State University (SDSU) from 1994 to 2001, compiling an overall college football record of 69–68–1. Tollner also was an assistant coach in the National Football League (NFL) for 15 seasons, including stints as offensive coordinator for the San Diego Chargers, San Francisco 49ers and Detroit Lions.

The Georgia Tech Yellow Jackets football team represents the Georgia Institute of Technology in the sport of American football. The Yellow Jackets team competes in the Football Bowl Subdivision (FBS) of the National Collegiate Athletic Association (NCAA) and the Coastal Division of the Atlantic Coast Conference (ACC). Georgia Tech has fielded a football team since 1892 and, as of 2017, has an all-time record of 735–502-43. The Yellow Jackets play in Bobby Dodd Stadium at Historic Grant Field in Atlanta, which has a capacity of 55,000.

Charles John Priefer is an American former football coach who held a variety of defensive and special teams coaching positions at the college and professional levels of the sport, including 17 seasons in the National Football League (NFL).

Tra Battle is a former American football safety in the National Football League for the San Diego Chargers and Dallas Cowboys. He played college football at the University of Georgia.

The 1992 San Diego Chargers season was the team's 33rd season, their 32nd in San Diego, and 23rd in the National Football League. 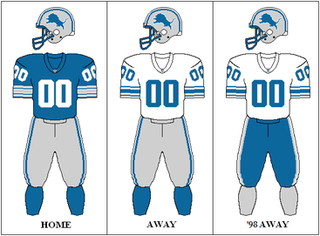 The 1996 Detroit Lions season was their 67th in the National Football League (NFL). The team declined severely from their previous season's output of 10–6. Following a 4-2 start, the Lions would proceed to lose nine of their final ten games to finish 5-11, missing the playoffs for the first time in four seasons. 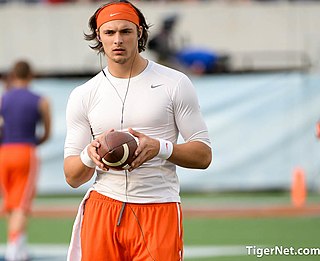 Cole Stoudt is an American football college coach and former player. He is currently an offensive player development coach at Clemson University, where he played college football and was the Tigers starting quarterback in 2014.

Brian Baker is an American football coach and former Linebacker who is currently the defensive line coach for the Indianapolis Colts. He had been coaching for over 30 years in football both college and the NFL prior to his joining the Colts.