Boost Mobile is an American wireless service provider owned by Dish Wireless. It uses the merged T-Mobile network (Sprint + T-Mobile) and AT&T to deliver wireless services. As of Q4 2021, Boost Mobile, along with its sister brands Ting Mobile, Republic Wireless, and Gen Mobile, had 8.55 million customers. [1]

After Peter Adderton founded Boost Mobile Australia and New Zealand in 2000, Peter Adderton, Craig Cooper, and Kirt McMaster brought the Boost Mobile brand to the United States in 2001 as a joint venture with Nextel Communications. Using Nextel's iDEN network, Boost Mobile offered an unlimited push-to-talk service, marketed as only costing a dollar a day, at a time when cellphone plans offering unlimited talk were still rare. The service was initially exclusive to markets in areas of California and Nevada and was marketed towards urban minorities, often using urban slang in advertisements. Eventually, Nextel became the sole owner of Boost's United States operations in 2003. Nextel began to expand the brand elsewhere in the United States in late 2004 after its acquisition by Sprint Corporation which was announced on December 15, 2004.[ citation needed ]

After the approval of the merger in July, 2005, Sprint Corporation acquired Nextel Communications, leaving Boost Mobile as a subsidiary of the merged company, Sprint Nextel Corporation. Boost Mobile still continued to use the previous Nextel iDEN infrastructure for its service, but in 2006, began to offer a new Unlimited by Boost Mobile service in select markets using Sprint's CDMA network, offering unlimited talk, text, and internet. While the plans resulted in significant growth for Boost Mobile, Boost did not begin shifting to CDMA entirely. [2]

To compete with unlimited offerings from competitors in the wireless industry, Boost Mobile announced on January 15, 2009, that it would launch a Monthly Unlimited Plan. [3] The plan was accompanied by re-focusing the brand towards a broader demographic than before. The new unlimited plan resulted in a net gain of more than 674,000 customers in about three months. [4] Despite this lift, Nextel overall suffered a gross subscriber loss of 1.25 million contract subscriptions. The unexpected surge in popularity for the service caused significant strain on the Nextel iDEN network—as many customers reported long and sometimes week-long delays in receiving text messages. A Boost Mobile spokesman said that they did not anticipate the level of popularity for the new service and that efforts to improve the network had been implemented to help mitigate the problem. [5]

At the 2010 Consumer Electronics Show, Boost Mobile announced it would begin to offer a new unlimited plan using Sprint's CDMA network. [6] Sprint would also acquire fellow prepaid wireless provider Virgin Mobile USA in 2010—both Boost and Virgin Mobile would be re-organized into a new group within Sprint, encompassing the two brands and other no-contract phone services offered by the company. [7]

Boost Mobile's parent company decommissioned the iDEN network on June 30, 2013; most iDEN customers have been migrated to the Sprint CDMA network.

In January 2020, Sprint discontinued the Virgin Mobile USA brand and transferred its customers to Boost Mobile. [8] [9]

In May 2020, during the George Floyd protests in Minneapolis–Saint Paul, 19 Boost Mobile stores were damaged during widespread rioting and looting, with four locations being severely damage by arson. [12] [13]

On July 19, 2021, Dish Wireless announced it was purchasing $5 billion of wholesale wireless over the next 10 years from AT&T. In exchange, Dish will share some of its 5G spectrum with AT&T. [14]

The Boost Mobile brand was initially marketed to the teen and young adult demographics, heavily focused on action sports, lifestyle and urban music. Boost Mobile's past American advertising campaigns featured Los Rakas, Terry Kennedy, Kanye West, Ludacris, and The Game, and used the slang slogan "Where you at?" [22] In late 2007, a Boost Mobile commercial with Young Jeezy, Jermaine Dupri, and Mickey Avalon was released. The "Where you at?" slogan referenced the walkie-talkie feature on all Boost Mobile phones and later evolved to highlight a social GPS application that was available on selected Boost Mobile phones. [23] Boost have also used Indy Car driver Danica Patrick in a commercial. A 2005 episode of Adult Swim's Aqua Teen Hunger Force titled "Boost Mobile" was an early example of native advertising within a regular television series.

Boost Mobile has also produced some regional campaigns, including providing live paper shredders at bus stops in Chicago and Boston, where several times an hour sample contracts from competing wireless service providers would be shredded into confetti. [24]

On January 20, 2010, Boost Mobile's then-parent company Sprint Nextel managed to secure some of the 1985 Chicago Bears players (including Jim McMahon, Willie Gault, and Mike Singletary) to re-create the team's famous "Super Bowl Shuffle" rap song and music video as "The Boost Mobile Shuffle" during the first quarter of the Super Bowl XLIV. [25] [26]

On July 1, 2021, the first day on which NCAA student-athletes were allowed to receive compensation for use of their name, image, and likeness (NIL), Boost announced that it had signed Haley and Hanna Cavinder, twin basketball players at Fresno State with a social media following in the millions, as spokespersons. [28]

Integrated Digital Enhanced Network (iDEN) is a mobile telecommunications technology, developed by Motorola, which provides its users the benefits of a trunked radio and a cellular telephone. It was called the first mobile social network by many technology industry analysts. iDEN places more users in a given spectral space, compared to analog cellular and two-way radio systems, by using speech compression and time-division multiple access (TDMA).

Bell Mobility Inc. is a Canadian wireless network operator and the division of Bell Canada which offers wireless services across Canada. It operates networks using LTE and HSPA+ on its mainstream networks. Bell Mobility is the third-largest wireless carrier in Canada, with 10.1 million subscribers as of Q3 2020. 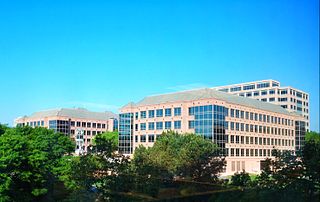 Alltel Wireless was a wireless service provider, primarily based in the United States. Before acquisitions by Verizon Wireless and AT&T, it served 34 states and had approximately 13 million subscribers. As a regulatory condition of the acquisition by Verizon, a small portion of Alltel was spun off and continued to operate under the same name in six states, mostly in rural areas. Following the merger, Alltel remained the ninth largest wireless telecommunications company in the United States, with approximately 800,000 customers. On January 22, 2013, AT&T announced they were acquiring what remained of Alltel from Atlantic Tele-Network for $780 million in cash. 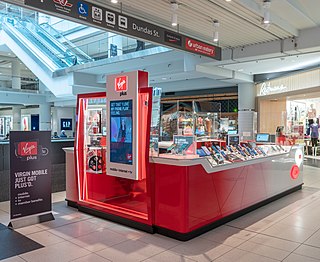 Virgin Plus is a provider of postpaid and prepaid wireless voice, text and data communications services throughout Canada. They also offer home Internet and TV services in select areas of Ontario and Quebec. Launched as Virgin Mobile Canada on March 1, 2005 as a joint venture between Virgin Group and BCE Inc., BCE took sole ownership on July 1, 2009 when it closed a deal to purchase the stake it did not already own. Virgin Plus calls its customers 'Members' and offers a Member Benefits program, which provides its customers with special offers, discounts, and VIP experiences. Helio, Inc. is a former, mobile virtual network operator (MVNO) using Sprint's network that offered wireless voice, messaging and data products and services to customers in the continental United States beginning on May 2, 2006. Originally a 50/50 joint venture founded in January, 2005 between South Korean wireless operator SK Telecom and American Internet services provider EarthLink, early losses caused EarthLink to stop providing additional funding in fall of 2007. SK Telecom provided the required additional funding to sustain Helio, which was re-organized as Helio LLC, and by January 2008, SK Telecom had assumed an increased ownership stake and with it, operational control of the joint venture. Although SK Telecom publicly pledged to support Helio, SK Telecom entered into talks to sell the company to rival MVNO Virgin Mobile USA. Virgin Mobile USA closed the acquisition of Helio and its 170,000 subscribers on August 22, 2008. Virgin Mobile USA exited the postpaid wireless business and retired the Helio brand on May 25, 2010.

Nextel Communications, Inc. was an American wireless service operator that merged with and ceased to exist as a subsidiary of Sprint Corporation, which would later be bought by T-Mobile US and folded into that company. Nextel in Brazil, and formerly in Argentina, Chile, Peru, the Philippines, and Mexico, is part of NII Holdings, a stand-alone, publicly traded company not owned by Sprint Corporation.

Koodo Mobile is a Canadian mobile flanker brand started by Telus in 2008 and mostly oriented toward younger customers. Koodo differs from its parent Telus by not requiring a fixed term contract. Koodo currently provides postpaid, prepaid, and wireless home phone services. Being a subsidiary of Telus, Koodo has been able to offer extensive coverage and a strong presence in mobile retailers. This allowed Koodo to gain a presence nationwide.

Public Mobile Inc. is a Canadian self-serve mobile brand which is owned by Telus. Launched on March 18, 2010, Public Mobile was one of several new Canadian cellphone providers that started in 2009–10 after a federal government initiative to encourage competition in the wireless sector. 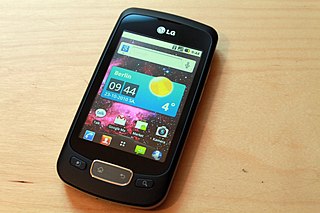 The LG Optimus One is an entry-level series of touch-screen smartphones manufactured by LG Electronics, Inc. It was released running the Android 2.2 Froyo, and later LG released software to upgrade it to Android 2.3 Gingerbread. Although the basic physical form factor of each variant is the same, the variants have differences in hard button shape and layout, the form of the metal side bezel and the user interfaces added by LG or various carriers. Versions of the Optimus One exist that operate on various frequency bands and either GSM or CDMA-based network protocols. They may also feature one or more variations in hardware, such as a faster processor, the addition of a physical keyboard, a modem with higher theoretical speeds, or a better digital camera.

Clearnet was a division of Telus Mobility launched in April 2011 to sell landline and mobile phone bundles in Western Canada. It was a revival of the Clearnet Communications brand name, which originally belonged to an independent cellular provider that was merged into Telus Mobility in 2000. Telus relaunched Clearnet as a discount provider with a "limited market trial" in Kelowna, British Columbia and Red Deer, Alberta.

Republic Wireless is an American mobile virtual network operator (MVNO). It is a subsidiary of Dish Wireless. Republic sells low cost mobile phone service on its partner AT&T's network. Republic started as a unique company that provided customers with VOIP numbers which relied on WiFi first with cell as a backup. After being acquired by Dish Wireless, Republic converted to providing conventional cellular service. Their service is now promoted as being available to Dish Network customers only. Switched from AT&T to T-mobile network when purchased by Dish around July 2022.

Ting Mobile is an American mobile virtual network operator owned by Dish Wireless. Originally established in February 2012 by Tucows, Ting provides cellular service in the United States using the T-Mobile network, while some grandfathered accounts use the Verizon network. The service is sold off-contract with billing that adjusts the cost of service based on actual customer usage.