Last updated December 29, 2019
For other places with the same name, see Borodino.
Village in Russia

The village is famous as the location of the Battle of Borodino on 7 September 1812 [1] in the Napoleonic Wars during the French invasion of Russia. The Borodino Battlefield (Бородинское поле) is now part of the State Borodino War and History Museum and Reserve. The reserved area is 109.7 square kilometers (42.4 sq mi); the area of the protected zone is 645 square kilometers (249 sq mi).

Archaeological evidence suggests that the area around Borodino was settled around 500 BC by Finnish, and then Slavic tribes. The well-preserved earthworks of a fort dating from about 200 BC, located near the village of Gorki, represent the earliest known military-historical construction in the Borodino area. However, the earliest written mention of the village of Borodino that has been found was in the 17th century.

Borodino's lands were attached to the Moscow principality at the beginning of the 14th century and were at the boundary with Lithuanian territory along the old Smolensk road. The peasants farming the land cultivated winter rye, spring barley, oats, summer wheat, flax, hemp and buckwheat. The farms were assessed as "fair" to "average". Women, except for field work, were engaged in spinning flax and wool, weaving and knitting, for home use. During the Time of Troubles the area suffered from bandits and raiders, and even until the end of the 18th century much of the area was still abandoned. [2]

According to some reports the hamlet of Borodino was first mentioned in the Mozhayskie scribe books in 1601. During the Time of Troubles the village was described as having a "churchyard on the Tsar's sovereign land on the Voinka River (река Воинка) with the Church of the Exaltation of the Cross of the Lord and the chapel of St. Nicholas", [3] [4] and further "in the church, images and candles and books and every church structure had secular parishioners". [5]

Prior to the construction of its own church at Borodino, people from the district were parishioners of the church of the Exaltation of the Holy Cross, which was on the other side of the Kolocha River at the confluence of the Stonets and Prudki creeks. [6] This church with a chapel (the lower church) in honor of St. Nicholas, Archbishop of Myra was destroyed in the Time of Troubles, probably in 1609. After that, the locals were parishioners in the church of the Assumption in the village Semenov also having a lower chapel of St. Nicholas. [6] The news of this church terminated in the middle of the 17th century.

Since the beginning of the 17th century, the village was known as the first possession of the Russian Tsar Mikhail Fedorovich Romanov dynasty, which after 1613 was presented to them as the "Czar of Tsarevo salary" "yastrebniku" (position in the "tsar's hunting") Mozhayskoe policeman nobleman. Theodore Konoplev Konopleva son Basil, who owned the neighboring hamlet - Shevardino. He belonged to the old servitors, whose members are mentioned in the documents of the end of the 16th century.

In 1626 and 1627, the area is referred to in the letter Mozhayskie scribe books and measures Nikifora Neplueff clerk and Alexei Berestov as "the place of the church, fields overgrown forest", and in fact Borodino, as seltso Kolotsky mill of Mozhaysk County. Then half of the village of Borodino - "The yard of his place votchennikovo yes four places peasant serfs" was recorded for Bogdan Kanaplyou Vasilyevich, 1595-1598 in which he was the elder labial and had a yard to Mozhajsk and the other half - the 'four Peasants and bobylskih place "for his cousin (according to other sources - a nephew), Dmitry Mikhailovich Kanaplyou. The village gave them Fedor cannabis in exchange for the contribution given by his brother Bogdan Fedoseyev (after tonture Thedore) in Pafnutyevo-Borovsky monastery.

During the 1941 Battle of Moscow, the field was the place of a severe clash between the Soviet and German forces.

Nikon, born Nikita Minin was the seventh Patriarch of Moscow and all Rus' of the Russian Orthodox Church, serving officially from 1652 to 1666. He was renowned for his eloquence, energy, piety and close ties to Tsar Alexis of Russia. Nikon introduced many reforms which eventually led to a lasting schism known as Raskol in the Russian Orthodox Church. For many years he was a dominant political figure, often equaling or even overshadowing the Tsar. His liturgical reforms were unpopular among conservatives. In December 1666, Nikon was tried by a synod of church officials, deprived of all his sacerdotal functions, and reduced to the status of a simple monk.

Kolomenskoye is a former royal estate situated several kilometers to the southeast of the city center of Moscow, Russia, on the ancient road leading to the town of Kolomna. The 390 hectare scenic area overlooks the steep banks of the Moskva River. It became a part of Moscow in the 1960s. 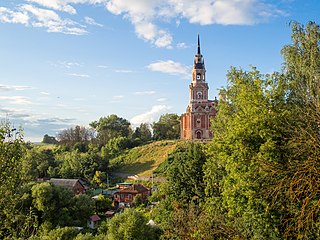 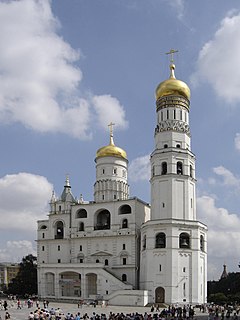 The Ivan the Great Bell Tower is a church tower inside the Moscow Kremlin complex. With a total height of 81 metres (266 ft), it is the tallest tower and structure of Kremlin. It was built in 1508 on Cathedral Square for the three Russian Orthodox cathedrals, namely the Assumption, the Archangel and the Annunciation, which do not have their own belfries. It serves as a part of Moscow Kremlin Museums. 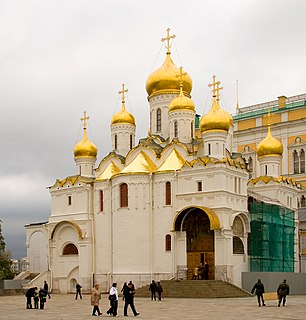 The Cathedral of the Annunciation is a Russian Orthodox church dedicated to the Annunciation of the Theotokos. It is located on the southwest side of Cathedral Square of the Moscow Kremlin in Russia, where it connects directly to the main building of the complex of the Grand Kremlin Palace, adjacent to the Palace of Facets. It was originally the personal chapel for the Muscovite tsars, and its abbot remained a personal confessor of the Russian royal family until the early 20th century. Now it also serves as a part of Moscow Kremlin Museums.

Tsaryovo-Zaymishche is a village in Vyazemsky District of Smolensk Oblast, Russia, situated on the old road from Smolensk to Moscow, west of Vyazma.

The Tsardom of Russia, also called the Tsardom of Muscovy, was the centralized Russian state from the assumption of the title of Tsar by Ivan IV in 1547 until the foundation of the Russian Empire by Peter the Great in 1721. 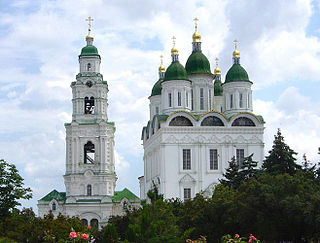 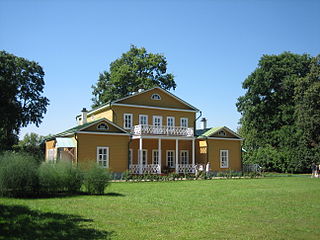 Tarkhany is a Writer's house museum in a Russian estate where the Romantic writer Mikhail Lermontov (1814–1841) spent his childhood and was buried. The late 18th Century–early 19th Century estate is located in the village of Lermontovo in the Belinsky District of Penza Oblast. Tarkhany is the main tourist attraction of Penza Oblast. 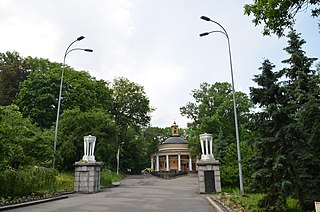 Askold's Grave is a historical park on the steep right bank of the Dnieper River in Kiev between Mariinsky Park and the Kiev Pechersk Lavra complex.

Our Lady Derzhavnaya is a Russian icon believed to date from the 18th century. According to Irina Yazykova, the Reigning Icon, "remains one of the most revered both inside Russia and in Russian emigre circles. Copies of the Reigning Icon of the Mother of God can now be found all over the world."

Kirill Gorbunov was a Russian portrait painter and lithographer.

Nikolay Apollonovich Maykov was a self-taught Russian portrait, history and religious painter in the Academic style.

Battle of Mozhaisk was a series of battles at the final stage of the Polish-Muscovite War (1605-1618). on the western approaches to Moscow. The battle is part of the Moscow campaign of Wladyslaw IV. During months of fighting, the Russian armies managed to maintain their combat capability and prevent the rapid seizure of Moscow. However, the threat of encirclement forced the Russian troops to retreat, opening the way to the enemy for the capital.