Boston Shamrock Rovers (also known as Boston Rovers) were an American soccer team that competed in the United Soccer Association league in 1967. The team was based in Lynn, Massachusetts and played their home games at the Manning Bowl. The USA league was made up of rosters from club teams from Europe and South America. The Boston Rovers were made up of the roster from League of Ireland side Shamrock Rovers, plus some guests. Together with Cleveland Stokers, Detroit Cougars, New York Skyliners, Toronto City and Washington Whips, Rovers competed in the Eastern Division. These teams were Stoke City, Glentoran, C.A. Cerro, Hibernian and Aberdeen respectively.

Boston Shamrock Rovers finished bottom of the Eastern Division (and last in points in the entire league) and did not qualify for the play-off stages. Prior to the 1968 season the United Soccer Association merged with the National Professional Soccer League to form the North American Soccer League. The merged league decided not to have two-team cities and, as such, the incoming Boston Beacons from the NPSL would be Boston's NASL franchise. Initial plans were that the Rovers would relocate to a new city (possible cities included Cleveland and Montreal) but those plans were never realized and the Boston USA franchise disbanded prior to the 1968 season.

Boston Shamrock Rovers played their home matches at the Manning Bowl in Lynn, Massachusetts which is about 11 miles (18 km) northeast of Boston. 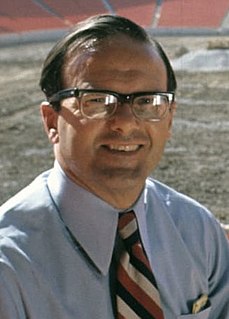 Lamar Hunt was an American businessman most notable for being one of the sons of H.L. Hunt. Lamar made a name for himself by his promoting of football, soccer, basketball, tennis and ice hockey in the United States.

Shamrock Rovers Football Club is an Irish association football club based in Tallaght, South Dublin. The club's senior team competes in the League of Ireland Premier Division and it is the most successful club in the Republic of Ireland. The club has won the League of Ireland title a record 18 times and the FAI Cup a record 25 times. Shamrock Rovers have supplied more players to the Republic of Ireland national football team (62) than any other club. In All-Ireland competitions, such as the Intercity Cup, they hold the record for winning the most titles, having won seven cups overall.

The United Soccer Association was a professional soccer league featuring teams based in the United States and Canada. The league survived only one season before merging with the National Professional Soccer League to form the North American Soccer League. Every team in the league was actually an imported European or South America club, that was then outfitted with a "local" name. Dick Walsh served as the commissioner.

The Cleveland Stokers were a soccer team based out of Cleveland, Ohio that played in the United Soccer Association during 1967 and the North American Soccer League in 1968. Their home field was Cleveland Stadium.

The Chicago Mustangs were an American professional soccer team based out of Chicago, Illinois that was a charter member of the United Soccer Association in 1967. The league was made up of teams imported whole from foreign leagues. The Chicago club was actually Cagliari Calcio from Italy. The franchise was owned by Arthur Allyn Jr., the owner of Artnell Corporation and Major League Baseball's Chicago White Sox. The Mustangs shared Allyn-owned Comiskey Park with the White Sox for its home matches. They drew just 25,237 paid admissions over the course of 6 home games.

The Toronto Falcons were a soccer team based in Toronto, Ontario, Canada. They played only two years, 1967 in the National Professional Soccer League (NPSL) and 1968 in the North American Soccer League (NASL). Their home field was Varsity Stadium.

Vancouver Royal Canadians was a soccer team based in Vancouver, British Columbia, Canada that played in the U.S.-based United Soccer Association (USA) and North American Soccer League (NASL). The USA was made up of entire teams imported from Europe and Latin America. For the 1967 season, the Vancouver club was actually Sunderland A.F.C. of English Football League. Their home field was Empire Stadium.

The Chicago Spurs were an American professional soccer team based out of Chicago, Illinois that was a charter member of the non-FIFA sanctioned National Professional Soccer League (NPSL) in 1967. The owners of the franchise were Al Kaczmarek, William Cutler and Michael Butler. The team played at Soldier Field. The Spurs also played non-league games in

The New York Skyliners were a soccer team based in New York, New York that played in the United Soccer Association. The league was made up of teams imported from foreign leagues and the Skyliners were actually the roster of C.A. Cerro from Montevideo, Uruguay.

Toronto City was a Canadian soccer team based in Toronto, Ontario. Between 1961 and 1967, teams using this name competed in both the Eastern Canada Professional Soccer League and the United Soccer Association.

Patrick Martin "Paddy" Mulligan is an Irish retired footballer who played mainly as a right-back.

Boston, the capital city of the U.S. state of Massachusetts and largest city in New England, is home to several major league sports teams. They include the Red Sox (baseball), the Celtics, and the Bruins. The New England Patriots and the New England Revolution (soccer) play at Gillette Stadium in nearby Foxborough. The New England Free Jacks play at Union Point Sports Complex in nearby Weymouth. Several Boston-area colleges and universities are also active in college athletics.

The National Professional Soccer League (NPSL) was a North American professional soccer league that existed for only the 1967 season before merging with the United Soccer Association (USA) to form the North American Soccer League. It had ten charter members, nine from the United States and one from Canada. To encourage attacking play, the NPSL introduced a new standings points system that was later used by the NASL – 6 points for a win, 3 for a draw, 0 for a loss and 1 bonus point for each of the first three goals scored. The circuit's commissioner was Ken Macker, an American publisher of three Philippines-based newspapers. The name National Professional Soccer League was revived in 1990 and used by a United States professional indoor soccer league.

The 1968 North American Soccer League season was the 56th season of FIFA-sanctioned soccer in the United States and Canada, and the 1st with a national first-division league with the inaugural season of the NASL.

Denis "Dinny" Doyle was an Irish football wing half who played professionally in Ireland and the United States. He earned one caps with the Irish Free State national football team in 1926. He was born in Dublin.

Mick Lawlor is an Irish former footballer who played as a forward.