Boy Abunda was born in Borongan. [2] He attended Ateneo de Manila University, [2] where he took up Business Management. However, he did not finish that course because of his father's death. He left Ateneo and worked in odd jobs to support himself. [3]

At the Metropolitan Theater, he worked as a stage actor and eventually as an assistant stage manager. Later, he became the assistant of the theater's administrator Conchita "Tita Conching" Sunico, [1] who taught him public relations. Within a couple of years, he started Backroom, Inc managing singers and actresses and a public relations firm. [2] He also worked as public relations consultant for GMA Network. It was during Abunda's public relations work in GMA7 when one of its executives named Bobby Barreiro, suggested that he should try hosting a television show.

Abunda became a host of Show and Tell , a late night variety talk show with Gretchen Barretto, and Startalk , an entertainment talk show. He subsequently moved to GMA Network's competitor ABS-CBN in 1999, where he has hosted the following shows: The Buzz , Private Conversations, Homeboy , Kontrobersyal , [2] SNN: Showbiz News Ngayon and The Bottomline with Boy Abunda , a talk show interview. [4] He is also a newscaster for entertainment of the late-night news program Bandila . He also worked as a radio commentator for DZAR, during the Angel Radyo era.

Abunda is openly gay and has been in a relationship with partner Elmer "Bong" Quintana since 1983. [9] Although Abunda is a practicing Catholic and Marian devotee, [10] [11] he is a supporter of LGBT rights and same-sex marriage, expressing disagreement with the Church's stand on homosexuality. [10] He denounced the 2016 Orlando Nightclub Shooting, [12] which has been recorded as the deadliest incident of violence against LGBT people in the United States.

Abunda's sister, Maria Fe Abunda, currently serves as a congresswoman for Eastern Samar. She had previously served as the mayor of Borongan. [13]

In August 2014, Abunda was not seen on TV for weeks. On September 7, 2014, he revealed in an exclusive interview with The Buzz that he had suffered from a medical condition in which 300 milliliters of abscess was removed from his liver. He was discharged from the hospital on August 23. [14] 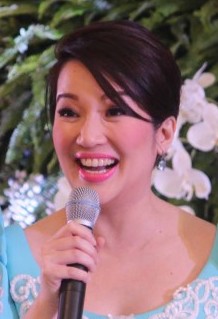 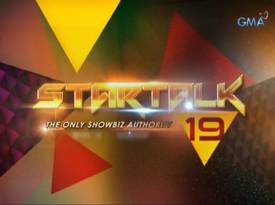 Startalk, formerly called as Startalk: The Only Showbiz Authority and Startalk TX is a Philippine television talk show broadcast by GMA Network. Originally hosted by Boy Abunda, Kris Aquino and Lolit Solis, it premiered on October 8, 1995 replacing Show & Tell. The show is the longest-running entertainment news and talk show in Philippine television. The show concluded on September 12, 2015 with a total of 1,024 episodes. Solis, Butch Francisco, Joey de Leon, Ricky Lo and Heart Evangelista served as the final hosts. It was replaced by CelebriTV in its timeslot.

Boy & Kris was a Philippine morning talk and lifestyle show of ABS-CBN premiered on July 2, 2007. The show is hosted by Boy Abunda and Kris Aquino aired on weekday mornings. On February 13, 2009, it aired its final episode and it was replaced by Ruffa & Ai.

SNN: Showbiz News Ngayon is a Philippine primetime entertainment news program broadcast by ABS-CBN and was presented by Boy Abunda and Kris Aquino, though Aquino was later replaced by Bianca Gonzales because of her brother's campaign for presidency. The show premiered on February 16, 2009. On September 9, 2011, SNN aired its final broadcast after 2 years replacing Eva Fonda. 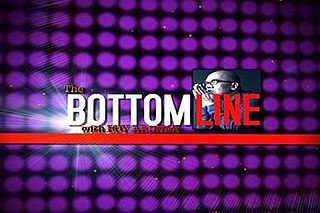 The Bottomline with Boy Abunda is a Philippine current affairs-talk-reality show, hosted by Boy Abunda, which premiered on November 28, 2009, and aired every Saturday night on ABS-CBN.

PMPC Star Awards for Television is an annual award-giving body recognizing the outstanding programming produced by the several TV networks in the Philippines.

The 24th PMPC Star Awards for TV ceremony was held at the Newport Performing Arts Theater, Resorts World Manila in Pasay on November 13, 2010 and broadcast over ABS-CBN Channel 2 on November 20, 2010. The ceremony was hosted by Angel Aquino, Ruffa Gutierrez and Miriam Quiambao.

Showbiz Lingo was a Philippine weekly entertainment news and talk show. It was first broadcast on August 2, 1992, under the name Showbiz Lingo and on May 11, 1997, after a reformat, as Showbiz Lingo Plus. It was the popular Sunday afternoon talk show on ABS-CBN for almost 7 years until it aired its final episode on June 6, 1999. It featured local celebrity gossip and news, and later would be replaced by The Buzz which would be the longest running talk show of the network for almost 16 years.

PMPC Star Awards for TV annually recognizes outstanding television programmes in the Philippines. In 2001, the winners were as follows:

The following is a list of winners for the PMPC Star Awards for TV for 2002.