Boydell & Brewer is an academic press based in Woodbridge, Suffolk, England, that specializes in publishing historical and critical works. In addition to British and general history, the company publishes three series devoted to studies, editions, and translations of material related to the Arthurian legend. There are also series that publish studies in medieval German and French literature, Spanish theatre, early English texts, in other subjects. Depending on the subject, its books are assigned to one of several imprints in Woodbridge, Cambridge (UK), or Rochester, New York, location of its principal North American office. Imprints include Boydell & Brewer, D.S. Brewer, Camden House, the Hispanic series Tamesis Books ("Tamesis" is the Spanish version of the River Thames, which flows through London), the University of Rochester Press, James Currey, and York Medieval Press.

The company was co-founded by historians Richard Barber and Derek Brewer in 1978, merging the two companies Boydell Press and D.S. Brewer which they had respectively founded. [3] [4] [5] [6] [7] [8]

In addition to the company's four primary imprints and partners, Camden House, University of Rochester Press, James Currey, and Tamesis, Boydell & Brewer publish and distribute for the Victoria County History, the Royal Historical Society, the London Record Society and the Scottish Text Society as well as several other societies.

Year 1047 (MXLVII) was a common year starting on Thursday of the Julian calendar.

Year 1235 (MCCXXXV) was a common year starting on Monday of the Julian calendar.

David Bates is a historian of Britain and France during the period from the tenth to the thirteenth centuries. He has written many books and articles during his career, including Normandy before 1066 (1982), Regesta Regum Anglo-Normannorum: The Acta of William I, 1066–1087 (1998), The Normans and Empire (2013), William the Conqueror (2016) in the Yale English Monarchs series and La Tapisserie de Bayeux (2019).

Richard William Barber FRSL FSA FRHistS is a British historian who has published several books about medieval history and literature. His book The Knight and Chivalry, about the interplay between history and literature, won the Somerset Maugham Award, a well-known British literary prize, in 1971. A similarly-themed 2004 book, The Holy Grail: Imagination and Belief, was widely praised in the UK press, and received major reviews in The New York Times and The New Republic.

Brian Oliver Murdoch is a British philologist who is Emeritus Professor of German at the University of Stirling. He specializes in the study of early Germanic and Celtic literature, on which he has authored and edited several influential works.

Roberta Lynn Gilchrist, FSA, FBA is a Canadian-born archaeologist and academic specialising in the medieval period, whose career has been spent in the United Kingdom. She is Professor of Archaeology and Dean of Research at the University of Reading.

Howard M. R. Williams is a British archaeologist and academic who is Professor of Archaeology at the University of Chester in England. His research focuses on the study of death, burial and memory in Early Medieval Britain.

Camden House, Inc. was founded in 1979 by professors James Hardin and Gunther Holst with the purpose of publishing scholarly books in the field of German literature, Austrian Literature, and German language culture. Camden House books were published in Columbia, SC until 1998. When the company became an imprint in that year, place of publication moved to Rochester, NY.

Michael Lapidge, FBA is a scholar in the field of Medieval Latin literature, particularly that composed in Anglo-Saxon England during the period 600–1100 AD; he is an emeritus Fellow of Clare College, Cambridge and Fellow of the British Academy, and winner of the 2009 Sir Israel Gollancz Prize.

James Currey is a former academic publisher specialising in African Studies which since 2008 has been an imprint of Boydell & Brewer. It is named after its founder who established the company in 1984. It publishes on a full spectrum of topics—including anthropology, archaeology, history, politics, economics, development studies, gender studies, literature, theatre, film studies, and the humanities and social sciences generally—and its authors include leading names such as Bethwell Ogot and Ngũgĩ wa Thiong'o. 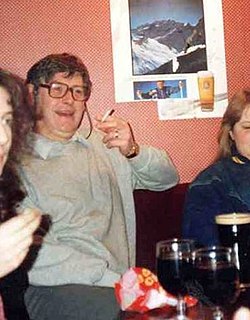 Christopher Harper-Bill was a British historian who was a professor of history at the University of East Anglia. He had previously taught Medieval History at St. Mary's University College (Twickenham). Harper-Bill's research interests were "the ecclesiastical history of England from the Norman Conquest to the eve of the Reformation, and particularly in the edition of episcopal and monastic records." Harper-Bill was completing a four-volume edition of the acta of the bishops of Norwich from 1070 to 1299.

Christopher Tyerman is an academic historian focusing on the crusades. In 2015, he was appointed Professor of History of the Crusades at the University of Oxford.

Gale Owen-Crocker is a Professor Emerita of the University of Manchester, England. Before her retirement she was Professor of Anglo-Saxon Culture and Director of the Manchester Centre for Anglo-Saxon Studies.

Alastair J. Minnis is a Northern Irish literary critic and historian of ideas who has written extensively about medieval literature, and contributed substantially to the study of late-medieval theology and philosophy. Having gained a first-class B.A. degree at the Queen's University of Belfast, he matriculated at Keble College, Oxford as a visiting graduate student, where he completed work on his Belfast Ph.D., having been mentored by M.B. Parkes and Beryl Smalley. Following appointments at the Queen's University of Belfast and Bristol University, he was appointed Professor of Medieval Literature at the University of York; also Director of the Centre for Medieval Studies and later Head of English & Related Literature. From 2003 to 2006, he was a Humanities Distinguished Professor at Ohio State University, Columbus, from where he moved to Yale University. In 2008, he was named Douglas Tracy Smith Professor of English at Yale. He retired in 2018, and is now living in the Scottish Borders. Professor Minnis is a Fellow of the English Association, UK (2000), a Fellow of the Medieval Academy of America (2001), and an Honorary Member of the Royal Irish Academy (2016). From 2012 to 2014, he served as President of the New Chaucer Society. Currently, he is Vice-President of the John Gower Society. He was General Editor of the Cambridge University Press series Cambridge Studies in Medieval Literature from 1987 to 2018, and holds an honorary master's degree from Yale (2007) and an honorary doctorate from the University of York (2018). The University of York also bestowed on him the honorific title of Emeritus Professor of Medieval Literature (2018).

Annette Marianne Volfing, FBA is a literary scholar and academic. Since 2008, she has been Professor of Medieval German Literature at the University of Oxford.

Julia Boffey is Professor of Medieval Studies at Queen Mary University of London. She studied as an undergraduate at Newnham College, Cambridge, and completed a D.Phil. thesis on medieval verse manuscripts at the Centre for Medieval Studies at York. She is the author of Manuscript and Print in London c.1475 - 1530 (2012) and Manuscripts of English Courtly Love Lyrics in the Later Middle Ages (1985), and editor of Fifteenth-century English Dream Visions: an Anthology (2003). She is also the co-editor of the New Index of Middle English Verse and A Companion to Fifteenth-Century English Poetry, as well as co-editor with Christiania Whitehead of Middle English Lyrics: New Readings of Short Poems (2018), with V. Davis of Recording Medieval Lives: Proceedings of the 2005 Harlaxton Symposium, and with Pamela King of London and Europe in the Later Middle Ages.

Cyril William Edwards was a British medievalist and translator. Teaching in London and Oxford, he published extensively on the medieval German lyric and Old High German literature, and translated four of the major Middle High German verse narratives.

Martin Allen FSA is a British numismatist and historian, specialising in medieval English coinage. He is Senior Assistant Keeper of Numismatics at the Fitzwilliam Museum, Cambridge.