Brain Damage began wrestling in Independent Wrestling Association Mid-South (IWA Mid-South) in 2000, making his first appearance at the second night of the King of the Death Match tournament on October 21. He defeated his trainer, Toby Klein, in a singles match that was not a part of the tournament. [6] His next appearance for the promotion was in 2005, when he competed in the 2005 edition of the annual King of the Deathmatch tournament. He lost his first round match, an "Unlucky Seven Staple Gun match" on the first night of the tournament to Mitch Page and Tank, who both qualified for the second round. [7]

Following this match, in October, Damage announced his retirement from professional wrestling and vacated the IWA Mid-South Tag Team Championship. [1] Despite this, Damage returned to wrestling a few months later, and eventually returned to IWA Mid-South in June 2007 competing at the 2007 King of the Deathmatch tournament, where he reached the semi-finals before losing to Freakshow. [18] [19] The Vulgar Display of Power defeated The Devil’s Rejects (Tank and Iceberg) and Six Feet Under (Insane Lane and Freakshow) and Darin Childs and Massive in a four-way tag team hardcore rumble match at Point Proven later that month, before taking another hiatus until October. [20] On October 26, the Vulgar Display of Power won the 2007 Double Death Tag Team Tournament by defeating Ian Rotten and Insane Lane in a House of Horrors match in the final. [21]

Damage did not appear in IWA Mid-South again until March 2008, when the Vulgar Display of Power accompanied to the ring by HalfBreed Billy Gram, defeated Mean n' Hard (Mitch Page and Rollin Hard) at IWA Mid-South's 500th show. [22] Damage returned to IWA Mid-South in October to join Deranged to compete in the 2008 Double Death Tag Team Tournament. The team was accompanied to the ring by Halfbreed Billy Gram, and even though they were still billed as Vulgar Display of Power, they were openly representing Cult Fiction. After defeating The Tough Crazy Bastards (Toby Klein and Necro Butcher), Corporal Robinson and Tracy Smothers, and Dysfunction and Danny Havoc en route to the final, they defeated Drake Younger and Devon Moore to win the tournament for the second year in a row. [23] [24]

Damage began competing for Combat Zone Wrestling (CZW) in 2005, appearing at their Tournament of Death IV show on July 30 in New Castle, Delaware. In his first round match, he defeated Beef Wellington in a two out of three falls tables match after winning the third fall by powerbombing Wellington through a "Light Tube Table". He lost his second round match to Necro Butcher, however, in a fans bring the weapons match, where the fans at the show provided the weapons used during the match. [25] In 2006, Damage participated in the Tournament of Death V, defeating Necro Butcher and Toby Klein in a Fans Bring The Weapons Death match, by eliminating Klein to eliminate him from the tournament. He won a four-way Barbed Wire and Panes of Glass Death match in the second round, but was defeated by Nick Gage in the final. [26]

Damage began competing full-time for CZW in 2007, competing mainly in singles competition. On April 7, at Out With the Old, In With the New, Damage defeated Danny Havoc, before Drake Younger at Restore the Order in May to win the CZW Ultraviolent Underground Championship. [27] [28] [29] After the match, he quickly established himself as a villainous character by joining Maven Bentley's faction, also including Mitch Ryder and DJ Hyde, and being involved in a scripted altercation with Lobo. [29] Damage also competed at Tournament of Death VI, but lost to Drake Younger in the final. [30] Damage defended the Ultraviolent Underground Championship against Younger at Dishonorable Conduct in August, however, the match ended in a double pin, so the owner of CZW, Zandig vacated the championship. [31] [32] At TOD: Fast Forward, Damage won a four-way elimination match to win the vacant championship. [27] [33] Damage also competed at Cage of Death 9, but was eliminated from the Cage of Death match. [34]

On January 12, 2008, Damage defeated Joker in a 20-minute Iron Man Home Run Derby Deathmatch in overtime, to retain the Ultraviolent Underground Championship and win the CZW Iron Man Championship. [31] [35] At the following CZW show, 9 F'N Years, Damage lost the Ultraviolent Underground Championship back to Younger, although he still remained the Iron Man Champion. [27] [36] He dropped the Iron Man Championship to DJ Hyde at Summer School in a four-way match, which also involved Danny Havoc and Insane Lane. [31] [37] The following month, on July 12, Damage defeated Hyde to win back the championship. [31] [38] In September 2008 Halfbreed Billy Gram began appearing with Brain Damage in CZW, and Brain Damage began openly representing Cult Fiction in CZW. Damage defended the championship over the following months, defeating opponents including Hyde, Cobein, before competing in the Cage of Death match at Cage of Death 10: Ultraviolent Anniversary , which was won by Zandig. [39] [40]

At the start of 2009, Damage began teaming with Deranged again, they were accompanied by Halfbreed Billy Gram, and both Damage and Deranged dropped the VDOP moniker and were simply known as Cult Fiction. [41] On February 14, at Decade of Destruction – 10th Anniversary, Damage lost the Iron Man Championship to Sami Callihan. [31] [42]

In 2004, Damage began competing for the Independent Wrestling Revolution promotion in Detroit, Michigan, and on March 21, at IWR Brawl At The Hall 3, he unsuccessfully challenged Deranged for the XICW Xtreme Championship in a match also involving Necro Butcher, The DBA and George Morbid. [43] In 2006, he wrestled at IWA East Coast's The Evil That Men Do on August 2, but was defeated by Bull Pain. [44]

Brain Damage made his one and only appearance for CHIKARA Pro's "King of Trios" tournament in 2009, where he teamed with Necro Butcher and Toby Klein. Together, they were known as "The Death Match Kings". They lost in the first round of the tournament to Team F.I.S.T. (Icarus, Gran Akuma, & Chuck Taylor).

Jonathan Whitcombe is an English professional wrestler, better known by his ring name Jonny Storm. He has worked for many independent promotions across the United Kingdom, including the Frontier Wrestling Alliance, Real Quality Wrestling and One Pro Wrestling. He has also worked in the United States, for promotions such as Ring of Honor, Pro Wrestling Guerrilla, Combat Zone Wrestling, and Total Nonstop Action Wrestling, as well as working in Japan.

John Corson, better known by the ring name John Zandig, is an American professional wrestler and promoter. He is the founder and former owner of the promotion Combat Zone Wrestling (CZW).

Edward Moore, known by his ring name Eddie Kingston, is an American professional wrestler. He appeared with Evolve, the National Wrestling Alliance, and All Elite Wrestling. 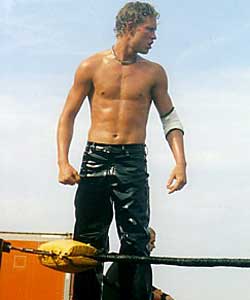 Christopher John Bauman Jr. was an American professional wrestler, better known by his ring name Chri$ Ca$h. Bauman wrestled in many independent promotions, but is known for his time in Combat Zone Wrestling, where he was a CZW World Tag Team Champion. On August 18, 2005, Bauman was killed in a motorcycle accident. 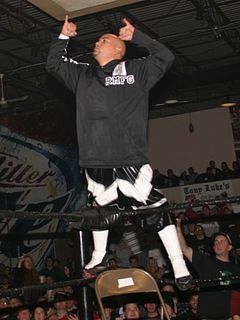 Benito "Benny" Cuntapay is an American professional wrestler better known by his ring name, B-Boy. He is best known for his work in the independent circuit, where he worked in promotions like Combat Zone Wrestling (CZW), Pro Wrestling Guerrilla (PWG), Jersey All Pro Wrestling (JAPW) or Wrestling Society X (WSX). He is a CZW World Heavyweight Champion, one-time CZW Iron Man Champion and three-times PWG World Tag Team Champion. He also won the CZW 2003 Best of the Best tournament and the PWG 2004 Tango & Cash Invitational tournament with Homicide. He also wrestled as Bael for Lucha Underground, but was killed by Matanza as part of the storyline. 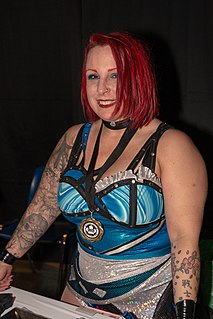 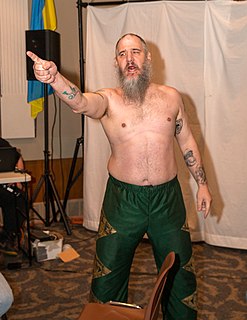 Claude Marrow is an American professional wrestler, better known by his ring name, Ruckus. He performs in Combat Zone Wrestling, Ring of Honor, Maryland Championship Wrestling, Chikara and Jersey All Pro Wrestling. While often appearing at a number of other independent promotions, Ruckus is a member of the Blackout/BLKOUT stable with Eddie Kingston, Sabian, Joker, and Robbie Mireno. 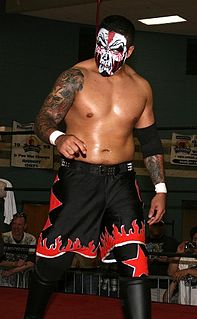 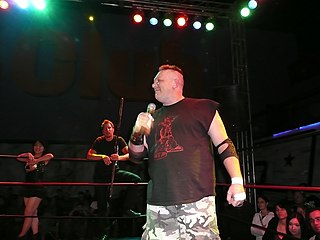 Nicholas W. Wilson is an American professional wrestler, best known for his work in Combat Zone Wrestling (CZW) and Game Changer Wrestling (GCW). Wilson currently wrestles under the ring name Nick Gage in GCW and various other promotions on the independent circuit.

Drake Wuertz is an American professional wrestling referee and retired professional wrestler currently signed to WWE, on their developmental territory NXT, where he referees under his real name. He has worked for a number of major independent promotions under the ring name Drake Younger, including Combat Zone Wrestling, IWA Mid-South, EVOLVE, Dragon Gate USA, Chikara, and Pro Wrestling Guerrilla (PWG). He is known for his deathmatch wrestling style. 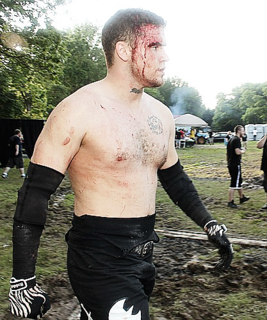 Grant Amos Berkland, better known by his ring name Danny Havoc, was an American professional wrestler. He was best known for his work in Combat Zone Wrestling (CZW), and was noted for mixing his technical style with hardcore wrestling.

Billy Gram is an American musician, screenwriter, actor, professional wrestler manager, color commentator and political activist. He is best known for appearances with the Philly punk-metal band Saints in Hell and his solo project Ghostdance Tribe. He has also appeared for the professional wrestling promotions Combat Zone Wrestling and IWA Mid South as the manager of Cult Fiction.

Matthew Tremont is an American professional wrestler and promoter, best known for his work in Combat Zone Wrestling (CZW). He currently makes appearances for his own promotion, Hardcore Hustle Organisation (H2O), as well as for Game Changer Wrestling (GCW). He has also worked for IWA Mid-South, IWA Deep-South and IWA East Coast.