Brain Wall (脳カベ, Nōkabe) is a component of the Japanese game show The Tunnels' Thanks to Everyone . Video clips from the show proliferated on video-sharing websites and the concept was eventually adopted by several other countries. It became popularly known to non-Japanese speakers and YouTube fans as simply Human Tetris or Hole in the Wall, named for its involvement of the physical body and a supposed close resemblance to the rules of the video game Tetris .

The rules of the game are the same, and how points are awarded varies from country to country.

The first component of the game involves a solo contestant, while later components involve groups of two people or more.

The production rights to the show outside Japan is owned by Fremantle and the program has been produced in 45 countries. 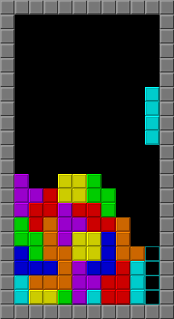 Tetris is a tile-matching video game created by Russian software engineer Alexey Pajitnov in 1984. It has been published by several companies, most prominently during a dispute over the appropriation of the rights in the late 1980s. After a significant period of publication by Nintendo, the rights reverted to Pajitnov in 1996, who co-founded The Tetris Company with Henk Rogers to manage licensing. 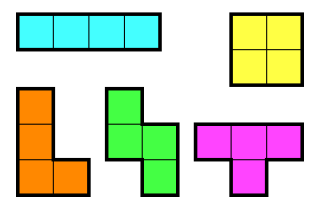 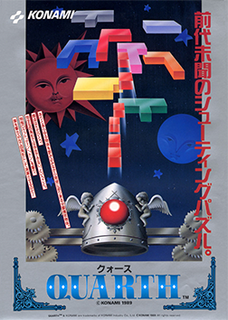 Quarth is a hybrid puzzle game/shoot 'em up developed by Konami which was released in 1989 as an arcade game, sold as Block Hole outside Japan.

Ciao Darwin is a variety game show format created and hosted by Paolo Bonolis, and produced by the Italian mass media company Mediaset.

Tetris & Dr. Mario is a 1994 puzzle video game compilation developed by Intelligent Systems and published by Nintendo for the Super Nintendo Entertainment System. It contains enhanced remakes of Tetris (1989) and Dr. Mario (1990), which were originally released for both the Nintendo Entertainment System and Game Boy in North America. Both games include split-screen multiplayer and a "Mixed Match" mode that transitions between the two games.

The New Tetris is a puzzle video game for the Nintendo 64. The game was developed by H2O Entertainment and published by Nintendo, based on the latter's popular Tetris series. The game was originally released on July 31, 1999, in North America.

A*mazing was an Australian children's television game show that aired between 16 May 1994 until 1998 on the Seven Network. It was famous for a relatively large and elaborate maze/obstacle course that was part of the show's studio set. A*mazing was hosted by James Sherry for the entire run of the series. A*mazing was produced at Channel 7 in Brisbane from 1994–1996 and then at Channel 7 in Perth from 1997–1998.

The Tetris effect occurs when people devote so much time and attention to an activity that it begins to pattern their thoughts, mental images, and dreams. It takes its name from the video game Tetris.

Fetch! with Ruff Ruffman is an American live-action/animated television series that was on PBS Kids Go!. It is a reality-game show that is hosted by an animated anthropomorphic dog named Ruff Ruffman who dispenses challenges to the show's real-life contestants. The series ran for five seasons and 100 episodes from May 29, 2006, to November 4, 2010, on PBS, with 30 contestants in that time. Although a sixth season was planned, with auditions taking place in January 2010, WGBH announced on June 14, 2010, that the series would end due to lack of funding. In June 2008, the series received its first Emmy for Best Original Song for its theme. It previously aired reruns on the 24-hour PBS Kids Channel from 2017 to 2018. 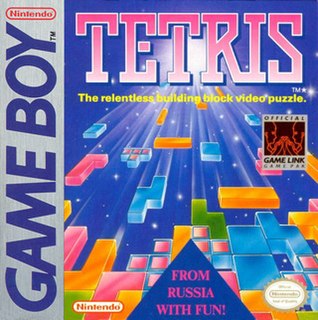 Tetris is a puzzle video game for the Game Boy released in 1989. It is a portable version of Alexey Pajitnov's original Tetris and it was bundled in the North American and European releases of the Game Boy itself. It is the first game to have been compatible with the Game Link Cable, a pack-in accessory that allows two Game Boys to link together for multiplayer purposes. A colorized remake of the game was released on the Game Boy Color entitled Tetris DX. A Nintendo 3DS Virtual Console version of Tetris was released in December 2011 and it lacked the multiplayer functionality. It was delisted from the Nintendo eShop after December 31, 2014.

Hole in the Wall was an Australian television game show hosted by Jules Lund, based on the Japanese game show Brain Wall. In the show, contestants are required to fit though holes in a polystyrene wall that moves towards them. 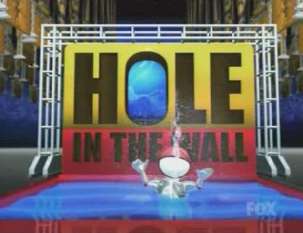 Hole in the Wall is an American game show that has aired in two versions on American television.

Wipeout is an American television game show. It features contestants competing in the "World's Largest" obstacle course which originally aired on ABC from June 24, 2008 to September 7, 2014. In 2020, it was announced that the show was being rebooted on TBS, with John Cena, Nicole Byer, and Camille Kostek as hosts. 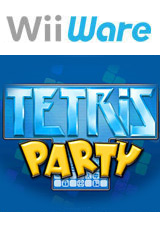 Tetris Party is a puzzle video game by Hudson Soft for WiiWare. An installment of the Tetris series, the game supports the use of Miis and the Wii Balance Board, and features both local and online multiplayer in addition to several single-player modes unique to the game.

Hole in the Wall is a British game show that aired on BBC One in the United Kingdom. It also occasionally aired repeats of this show on CBBC until April 2014. This game was an adaptation of the Japanese game Brain Wall in which players must contort themselves to fit through cutout holes of varying shapes in a large polystyrene wall moving towards them as they stand in front of a swimming pool. Each week, two teams of television personalities competed for £10,000 in prize money to be donated to their chosen charity.

Hole in the Wall is the Polish version of the UK comedy show, which has the same name, which in turn is based on the Japanese game show Brain Wall. It started airing the show in 2009 on TV4. It is hosted by three people from the cabaret group Formacja Chatelet - Adam Grzanka, Adam Małczyk and Michał Pałubski. The biggest prizes on the show are 3,000 złotys and 6,000 złotys. Hole in the Wall is shown on every Saturday at 10 PM (UTC+1) 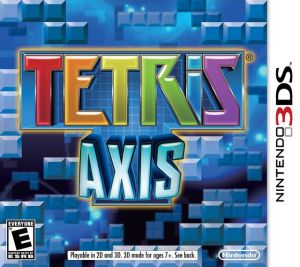 Tetris: Axis, released as Tetris in some regions, is a puzzle video game for the Nintendo 3DS developed by Hudson Soft and Bandai and was published by Nintendo. The game was released in all regions in October 2011 and was published by Namco Bandai Games and Tetris Online in Japan and PAL regions respectively.

Tetris Friends was an online Tetris game developed by Tetris Online, Inc. Registered users were able to compare their scores with their friends and with the entire community. It was the only official Flash implementation of Tetris made by the Tetris company itself. At the time, it was also the only official Tetris platform that had advertisements play before a match Tetris Friends had over a million registered users.

The Classic Tetris World Championship (CTWC) is a video game competition series, hosted by the Portland Retro Gaming Expo. The competition launched in 2010, during the filming of Ecstasy of Order: The Tetris Masters to determine the world's greatest Tetris player. In its first two years, the competition was held in Los Angeles, California, but was moved to Portland, Oregon, in 2012, and has been held there annually since.