Crvenkovski was born in Sarajevo, Bosnia and Herzegovina, then part of Yugoslavia. [1]

In 1986 he obtained a bachelor's degree in Computer Science and Automation from the School of Electrical Engineering at the Ss. Cyril and Methodius University in Skopje.

He was elected member of the Assembly of the Socialist Republic of Macedonia at the first multi-party elections in Yugoslavia in 1990 after serving for several years as head of department at the Semos company in Skopje. A former communist, Crvenkovski has been at the head of the Social Democratic Union of Macedonia since April 1991.

On 5 September 1992 he became Macedonia's second prime minister after its secession from Yugoslavia and continued in the post for another four years following the December 1994 elections.

He served as Prime Minister from 1992 to 1998 and from 2002 until 2004. He was most recently elected in 2002 after his Social Democratic Union of Macedonia party won parliamentary elections.

In July 1997 he ordered that Albanian flags in front of government buildings in western part of Macedonia be removed. The situation escalated with one person dead and many injured. In 2005, on his initiative, the Albanian flag was legalized.

He won the April 2004 presidential election against Saško Kedev and took office on 12 May 2004. He then resigned as Prime Minister.

Crvenkovski did not run for a second term in the March 2009 presidential election. Instead, he returned to his party and was elected to be the head of the party on 24 May 2009. [2]

Politics in North Macedonia occur within the framework of a parliamentary representative democratic republic, whereby the Prime Minister is the head of government, and of a multi-party system. Executive power is exercised by the government. Legislative power is vested in both the government and parliament. The Judiciary is independent of the executive and the legislature. The Economist Intelligence Unit rated North Macedonia a "hybrid regime" in 2019.

Internal Macedonian Revolutionary Organization – Democratic Party for Macedonian National Unity, simplified as VMRO-DPMNE is a political party in North Macedonia and one of the two major parties in the country, the other being the Social Democratic Union of Macedonia. 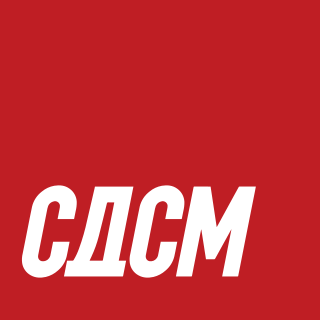 The Democratic Union for Integration is the largest ethnic Albanian political party in North Macedonia and the third largest political party in the country. It was formed immediately after the country's 2001 armed conflict between the National Liberation Army (NLA), a terrorist organization, and Macedonian security forces. NLA leader Ali Ahmeti has been the party's president ever since.

Presidential elections were held in Macedonia on 14 April 2004, with a second round on 28 April. They followed the death in an air crash in February of incumbent President Boris Trajkovski.

Hari Kostov was the Prime Minister of Macedonia from May 2004 to November 2004. He was appointed to the position of Prime Minister by the parliament on May 31, 2004, two weeks after being nominated by President Branko Crvenkovski. Kostov was an economic advisor to the Macedonian government and the World Bank during the 1980s and 1990s. He was the interior minister in the previous government, which was led by Crvenkovski and lasted from 2002 until 2004, and ended when Crvenkovski was elected president. Kostov retained most officials from the Crvenkovski government. 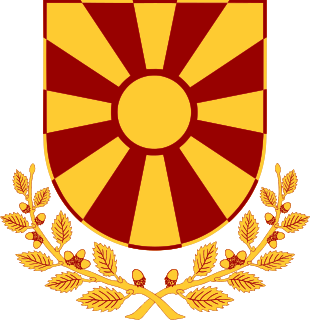 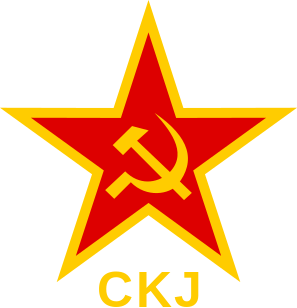 Zoran Jolevski is a Macedonian diplomat and the former Minister of Defense of the Republic of Macedonia. Prior to his appointment as Minister of Defense, he served as Macedonia's Ambassador to the United States of America. In November 2008, he was appointed chief negotiator to the Macedonia naming dispute, and in 2011 he was appointed Ambassador to the United Mexican States and as Permanent Representative to the Organization of American States. He served as Secretary General of the late Macedonian president Boris Trajkovski from 2000–2004. He holds a Ph.D. in International Economy from Ss. Cyril and Methodius University of Skopje. He is married to Suzana Jolevska, and together they have two sons, Pero (1988) and Filip (1992).

Gjorge Ivanov is a Macedonian politician, who served as the 4th President of North Macedonia from 2009 to 2019. 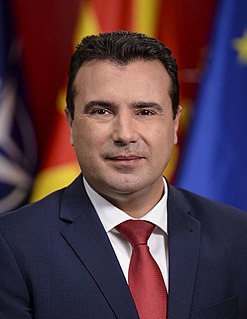 Zoran Zaev is a Macedonian economist and politician who is serving as the Prime Minister of North Macedonia since 30 August 2020, a position he previously held from 31 May 2017 to 3 January 2020.

Teuta Arifi is a Macedonian politician of Albanian origin. In April 2013 Teuta Arifi was elected the Mayor of Municipality of Tetovo. Previous to her run for local elections, Teuta Arifi served as Deputy Prime Minister of the Government of the Republic of Macedonia in charge of European Affairs. Arifi was the first Albanian woman to be elected in the Assembly of the Republic of Macedonia in 2002. She was subsequently re-elected as Member of Parliament in 2006, 2008, and 2011. She also holds the position of Vice-President of the Democratic Union for Integration (DUI), key political party of the Albanians in North Macedonia. She speaks Albanian, Macedonian, English, French, Italian and Turkish.

Stevo Pendarovski is a Macedonian politician who has served as the president of North Macedonia since 12 May 2019.

Nevzat Halili, is a Macedonian politician and teacher of English. Halili was first elected to the Macedonian parliament in 1991 and is a member of the Party for Democratic Prosperity. In an open letter to president Kiro Gligorov in 1993, Halili argued that the Albanians in Macedonia were discriminated against in the state administration and the public sector. He was minister without portfolio in the second government of Branko Crvenkovski (1994-1998). During the 1990s, Halili was sentenced to prison for participation in demonstrations and preventing police officers from exercising their duty.

Donika Gërvalla-Schwarz is a Kosovan politician. A member of the Guxo political list of the Vetëvendosje political party, she has served as minister of foreign affairs and second deputy prime minister in the second Kurti cabinet since 2021. Gërvalla-Schwarz is the daughter of assassinated Albanian activist Jusuf Gërvalla.