The Brazilian Football Confederation (Portuguese : Confederação Brasileira de Futebol; CBF) is the governing body of football in Brazil. It was founded in 1914 as Federação Brasileira de Sports  [ pt ]), and renamed to Confederação Brasileira de Desportos in 1916. The football confederation, as known today, separated from other sports associations in September 1979. Between 1914 and 1979 it was the governing body, or at least the international reference,[ clarification needed ] for other olympic sports, such as tennis (until the foundation of CBT in 1955) , athletics (until 1977 when was founded CBAt), Swimming, Waterpolo, Handball (until 1979). It currently has the most wins on FIFA world cups, with a total of 5 wins.

The CBF has its headquarters in Rio de Janeiro. [2] The confederation owns a training center, named Granja Comary, located in Teresópolis. [3]

It was announced on 29 September 2007 that the CBF would launch a women's league and cup competition in October 2007 following pressure from FIFA president Sepp Blatter during the 2007 FIFA Women's World Cup in China. [4] [5] 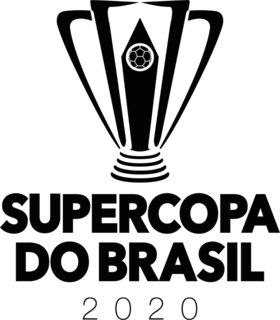 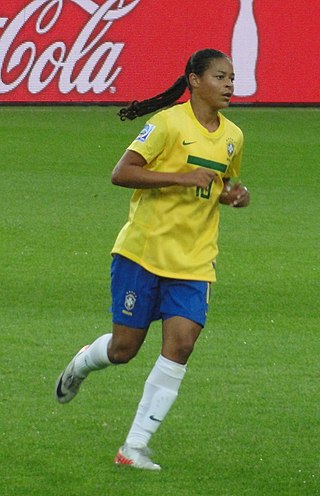 Grazielle Pinheiro Nascimento, commonly known as Grazielle or Grazi, is a Brazilian women's footballer who plays for Corinthians. She was part of the Brazil women's national football team at two Olympic soccer tournaments and at three editions of the FIFA Women's World Cup.

Bárbara Micheline do Monte Barbosa, commonly known as Bárbara, is a Brazilian footballer who plays as a goalkeeper for Kindermann and the Brazil women's national football team. Bárbara has played for clubs in Italy, Sweden and Germany as well as in her native Brazil. Since making her national team debut in 2007, she has won over 30 caps for Brazil. She has been part of her country's squad at four editions of the FIFA Women's World Cup and at two Olympic football tournaments.

Futsal in Brazil is governed by the Brazilian Futsal Confederation. Although it is not the most popular spectator sport in the country, it is the most practiced.

Maurine Dorneles Gonçalves, commonly known as Maurine, is a Brazilian footballer who plays as a defender or midfielder for Santos and the Brazilian women's national team. Due to her versatility, she has operated in a number of different positions throughout her career, but is most often used as a full-back or defensive midfielder. She was part of Brazil's silver medal-winning squad at the 2008 Beijing Olympics and also played at the 2011 and 2015 editions of the FIFA Women's World Cup, as well as the 2012 London Olympics.

The Prêmio Craque do Brasileirão is an award given by the Brazilian Football Confederation and Rede Globo for the best players, head coaches, and referees of the Série A.

José Maria Marin is a Brazilian politician and former sports administrator who was the President of the Brazilian Football Confederation from March 2012 until April 2015. He had previously served as vice-governor and governor of São Paulo state and is a former football player.

Marco Polo Del Nero is a Brazilian lawyer and sports administrator. He was the president of the Brazilian Football Confederation, a former member of CONMEBOL's executive committee and of the FIFA Executive Committee.

Luciana Maria Dionizio, commonly known as Luciana, is a Brazilian footballer who plays as a goalkeeper for Ferroviária and the Brazilian national team. She participated at the 2015 FIFA Women's World Cup.

Monica Hickmann Alves, commonly known as Mônica, is a Brazilian professional footballer who plays as a defender for Spanish Primera División club Madrid CFF and the Brazil national team. She participated in the 2015 and 2019 FIFA Women's World Cups and the 2016 Rio Olympics.

Tamires Cássia Dias de Britto, commonly known as Tamires, is a Brazilian footballer who plays as a left-back for Corinthians and the Brazil national team. She participated at the 2015 and 2019 editions of the FIFA Women's World Cup, as well as at the 2016 Olympic Games.

Géssica do Nascimento, commonly known as Géssica, is a Brazilian footballer who plays as a defender for Ferroviária and the Brazilian national team. She participated at the 2015 FIFA Women's World Cup.

Associação Ferroviária de Esportes Futebol Feminino, commonly known as Ferroviária or Ferroviária/Fundesport, is a professional women's association football club based in Araraquara, São Paulo state, Brazil. Founded in 2001, they have won the Campeonato Paulista on four occasions. In 2014 they secured a double of the Campeonato Brasileiro and the Copa do Brasil. The club is a three-way collaboration between the Ferroviária men's football club, the local authority's sports and leisure department and the charitable arm of the Caixa bank.

Clube de Regatas do Flamengo, commonly known as Flamengo/Marinha, is a professional women's association football club based in Rio de Janeiro, Brazil. Founded in 1995, the team is affiliated with FFERJ and play their home games at Estádio da Gávea. The team colors, reflected in their logo and uniform, are red and black. They play in the top tier of women's football in Brazil, the Campeonato Brasileiro de Futebol Feminino, and in the Campeonato Carioca de Futebol Feminino, the first division of the traditional in-state competition. Their players belong to the Brazilian Navy, which has formed a partnership with the team in 2015.

The Brazilian Sports Confederation, also known by the acronym CBD, was the main sports confederation of Brazil, competent in the matter of tennis, athletics, swimming, water polo, handball, football, and any sporting activity not belonging to a self-standing institution. Football played a prominent role since the statute stated that it constituted "the basic and essential sport of the Confederação Brasileira de Desportos". The CBD was born to overcome the contrasts between the Federação Brasileira de Futebol (FBF) and the Federação Brasileira de Sports (FBS), the two bodies that competed for hegemony in the organization of football in the country, an expression of the State of Sao Paulo and State of Rio de Janeiro football movement respectively. The establishment of the CBD led to the extinction of the two state entities on 21 June 1916, and in the same year, there was affiliation to the South American Football Confederation. On 20 May 1923, it obtained affiliation to the FIFA. The Confederation also represented most of the Brazilian states in the sports sector. Today dissolved, in terms of football, its attributions and functions have been conferred on the Confederação Brasileira de Futebol (CBF), built in 1979.