Break Through! (パッチギ!, Pacchigi!) is a 2005 Japanese film directed by Kazuyuki Izutsu.

Romeo, A.K.A. Kosuke Matsuyama (Shun Shioya), is a second-year high school student. A nice, normal, nonviolent type, he suddenly finds himself in the middle of a rampaging crowd of Korean boys, outraged by insults perpetrated by several of his idiotic classmates on two Korean girls. He makes a narrow escape, but soon after, he and his best bud Yoshio (Keisuke Koide) are sent by their home-room teacher to invite the Korean students to a friendly soccer game as a way of restoring the peace.

Trembling like black-uniformed leaves, they enter enemy territory, where Kosuke encounters a doll-faced, but serious-looking girl (Erika Sawajiri) playing a Korean folk song, "Imjin River," on a flute. He and Yoshio are also nearly lynched by her older brother Lee Ang Son (Sosuke Takaoka) and his gang, but he is already smitten—and eager to learn that haunting tune.

The story concentrates on Kosuke's struggle to not only master a song, but win the love of a girl who seems to live in an alien, hostile world. Meanwhile, Ang Son and his crew are street-fighting with Japanese toughs as if playing a contact sport, with one side scoring hits, then the other. He is macho to a fault, but when he learns that his sweet-heart (Kyoko Yanagihara) is pregnant and determined to keep the baby, he faces a choice that makes him quail: grow up or cop out.

Erika Sawajiri is a former Japanese actress, singer, and model. After starting out as a junior model, Sawajiri transitioned to acting in 2002 and has starred in Break Through!, Shinobi: Heart Under Blade, and 1 Litre of Tears, for all of which she received several newcomer acting awards. Sawajiri also launched a singing career through the 2006 television drama Taiyō no Uta, where her first commercially-released song of the same name was certified Million by the Recording Industry Association of Japan. She later released solo music under the name Erika. 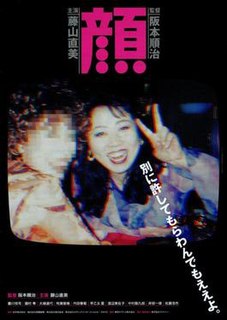 Shun Nakahara is a Japanese film director and a professor at the Japan Institute of the Moving Image. He started his career with pornographic films, and since then he has dealt with a wide range of subjects regardless of genre. He won the award for Best Director at the 12th Yokohama Film Festival for Sakura no Sono.

Shunichi Kajima is a Japanese film director. He won the award for Best Director at the 9th Yokohama Film Festival for Chōchin.

Onibi (鬼火) is a 1997 Japanese film directed by Rokuro Mochizuki.

Disciples of Hippocrates is a 1980 Japanese film directed by Kazuki Ōmori.

Uchū no hōsoku (宇宙の法則) is a 1990 Japanese film directed by Kazuyuki Izutsu.

Ready to Shoot is a 1990 Japanese film directed by Kōji Wakamatsu.

The 33rd Yokohama Film Festival (第33回ヨコハマ映画祭) was held in 2012 in Yokohama, Kanagawa, Japan.

Chameleon is a 2008 Japanese crime action film directed by Junji Sakamoto, starring Tatsuya Fujiwara. It was released in Japan on 5 July 2008. It was screened in the Midnight Passion section at the 13th Busan International Film Festival. Fujiwara won the Best Actor award at the 18th Japan Film Professional Awards.