Breaking the Limits (Polish : Najlepszy) is a 2017 Polish biographical film directed by Łukasz Palkowski about the life of Jerzy Górski. The film stars Jakub Gierszał as Górski. Film shows how Gorski manage to win the double Iron Man triathlon after years of being drug addict. In this inspirational film we get to know Gorski from the very beginning, at the onset of his addition to drugs. But along with rising action, main character becomes more and more addicted and lose his best friend and soon, a lover. It's during the second half of movie when he decides to change and fight his demons. For his mother, himself, new lover and most important his daughter which was left without mother after his girlfriend died from overdose. However leaving your addiction is much more harder than winning the biggest triathlon...

The film has won a total of six awards at the 42nd Polish Film Festival in Gdynia.

Chopin: Desire for Love is a film created by the director Jerzy Antczak based on the life story of the Polish pianist and composer Frédéric Chopin.

Pornografia is a 2003 Polish-French film directed by Polish director Jan Jakub Kolski. It is based on the Witold Gombrowicz novel Pornografia (1960), set in Nazi-occupied Poland during World War II.

Man of Marble is a 1977 Polish film directed by Andrzej Wajda. It chronicles the fall from grace of a fictional heroic Polish bricklayer, Mateusz Birkut, who became the Stakhanovite symbol of an over-achieving worker, in Nowa Huta, a new socialist city near Kraków. Agnieszka, played by Krystyna Janda in her first role, is a young filmmaker who is making her diploma film on Birkut, whose whereabouts seems to have been lost two decades later. The title refers to the propagandist marble statues made in Birkut's image.

Klan is a Polish soap opera that premiered on September 22, 1997 on the public TVP1 channel. With more than 3,600 episodes spanning over 22 seasons, the show has been the longest-running Polish TV series. It airs from Monday to Friday at 6.00 p.m. on TVP1.

No End is a 1985 film directed by Krzysztof Kieślowski and starring Grażyna Szapołowska, Maria Pakulnis, and Aleksander Bardini. The film is about the state of martial law in Poland after the banning of the trade union Solidarity in 1981. Kieślowski worked with several regular collaborators for the first time on No End.

Jutro idziemy do kina is a 2007 Polish Television movie, directed by Michał Kwieciński. It tells a story of three friends, who graduated from high school in May 1938. Two of them joined the army, and the third became a student of medicine. After graduation, they frequently meet each other, and in the summer of 1939, when war becomes imminent, they try not to keep themselves too occupied with it. Outbreak of World War II, changes their world forever.

Na dobre i na złe is a Polish television medical drama series, broadcast on TVP2 since November 7, 1999. It is the longest-running weekly primetime drama on Polish TV and one of the longest-running medical dramas in the world. The show revolves around the lives of doctors and patients of a teaching hospital in a fictional town of Leśna Góra near Warsaw.

The Story of Sin is a 1975 Polish drama film directed by Walerian Borowczyk based on the novel Dzieje grzechu by Stefan Żeromski. It was entered into the 1975 Cannes Film Festival.

All That I Love is a 2009 Polish film directed by Jacek Borcuch. The film has been selected for competition in the Word Cinema Dramatic Competition at the Sundance Film Festival 2010. It was also selected as the Polish entry for the Best Foreign Language Film at the 83rd Academy Awards but it didn't make the final shortlist. 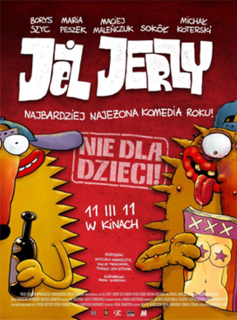 George the Hedgehog is a 2011 Polish animated black comedy film directed by Wojciech Wawszczyk, Jakub Tarkowski and Tomasz Leśniak. Based on the Jeż Jerzy comic books, it tells the story of two neo-Nazis and a mad scientist creating a clone of the title character in an attempt to defeat him. 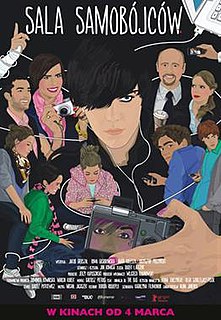 Suicide Room is a 2011 Polish drama film directed by Jan Komasa. The premiere was held on 12 February 2011 at The Berlin International Film Festival and on 28 February 2011 in Złote Tarasy in Warsaw, Poland. The movie was released in the cinemas on 4 March 2011. The film went on to receive several awards, including those for best actor, best actress, best screenplay and best film.

Górski is a Polish-language surname which belongs to several noble Polish families. Variants found in other countries include Gorski, Gorsky, Gurski.

Jakub Gierszał is a Polish actor. His screen debut was in 2009, playing the role of Kazik in the film All that I love. He later starred in the film Suicide Room, in which he played the character of Dominik, a high school student from a wealthy family who developed a mental health problem.

Morris from America is a 2016 American-German coming-of-age comedy-drama film written and directed by Chad Hartigan, and produced by Martin Heisler, Sara Murphy, Adele Romanski, and Gabriele Simon. It stars Craig Robinson, Markees Christmas, Carla Juri, Lina Keller and Jakub Gierszał. It is about a 13-year-old boy who dreams of becoming a rapper in an EDM-dominated culture.

Yuma is a 2012 Polish-Czech action film directed by Piotr Mularuk.

Lasting is a 2013 Polish drama film directed and written by Jacek Borcuch.

Big Brother 2 is the second season of the Polish reality television series Big Brother. The show followed a number of contestants, known as housemates, who are isolated from the outside world for an extended period of time in a custom-built house. Each week, one of the housemates is evicted by a public vote, with the last housemate remaining winning a cash prize.

Łukasz Palkowski is a Polish film director and screenwriter.