Greatly influenced by science fiction pioneer H. G. Wells, Aldiss was a vice-president of the international H. G. Wells Society. He was (with Harry Harrison) co-president of the Birmingham Science Fiction Group. Aldiss was named a Grand Master by the Science Fiction Writers of America in 2000 and inducted by the Science Fiction Hall of Fame in 2004. He received two Hugo Awards, one Nebula Award, and one John W. Campbell Memorial Award. [1] He wrote the short story "Supertoys Last All Summer Long" (1969), the basis for the Stanley Kubrick–developed Steven Spielberg film A.I. Artificial Intelligence (2001). Aldiss was associated with the British New Wave of science fiction. [2]

Aldiss was born on 18 August 1925, [3] above his paternal grandfather's draper's shop in Dereham, Norfolk. When Aldiss's grandfather died, his father, Bill (the younger of two sons), sold his share in the shop and the family left Dereham. Aldiss's mother, Dot, was the daughter of a builder. [4] He had an older sister who was stillborn, and a younger sister. [5] As a three-year-old, Aldiss started to write stories which his mother would bind and put on a shelf. [6]

At the age of 6, he went to Framlingham College but moved to Devon and was sent to board at West Buckland School in Devon in 1939 after the outbreak of the war. [4] As a child he discovered the pulp magazine Astounding Science Fiction . He eventually read all the novels by H. G. Wells and Robert Heinlein, and later Philip K. Dick. [7] In 1943, during the Second World War, he joined the Royal Signals [8] and saw action in Burma. [9]

His army experience inspired the novel Hothouse [10] and the Horatio Stubbs second and third books, A Soldier Erect and A Rude Awakening, respectively. [11]

After the war, he worked as a bookseller in Oxford. [12] He also wrote a number of short pieces for a booksellers' trade journal about life in a fictitious bookshop, which attracted the attention of Charles Monteith, an editor at the publisher Faber and Faber. [13] As a result, Faber and Faber published Aldiss's first book, The Brightfount Diaries (1955), a 200-page novel in diary form about the life of a sales assistant in a bookshop.

About this time he also began to write science fiction for various magazines. According to ISFDB, his first speculative fiction in print was the short story Criminal Record, published by John Carnell in the July 1954 issue of Science Fantasy . [14] Several of his stories appeared in 1955, including three in monthly issues of New Worlds , [14] also edited by Carnell.

In 1954, The Observer newspaper ran a competition for a short story set in the year 2500. Aldiss's story Not For An Age was ranked third following a reader vote. [15]

The Brightfount Diaries had been a minor success, and Faber asked Aldiss if he had any more writing they could look at with a view to publishing. Aldiss confessed to being a science fiction author, to the delight of the publishers, who had a number of science fiction fans in high places, and so his first science fiction book was published, a collection of short stories entitled Space, Time and Nathaniel (Faber, 1957). By this time, his earnings from writing matched his wages in the bookshop, and he made the decision to become a full-time writer.[ citation needed ]

Aldiss led the voting for Most Promising New Author of 1958 at the next year's Worldcon, but finished behind "no award". [1] He was elected president of the British Science Fiction Association in 1960. He was the literary editor of the Oxford Mail newspaper from 1958 to 1969. [12] Around 1964, he and long-time collaborator Harry Harrison started the first ever journal of science fiction criticism, Science Fiction Horizons, which during its brief span of two issues published articles and reviews by such authors as James Blish, and featured a discussion among Aldiss, C. S. Lewis, and Kingsley Amis in the first issue [16] and an interview with William S. Burroughs in the second. [17] In 1967 Algis Budrys listed Aldiss, J. G. Ballard, Roger Zelazny, and Samuel R. Delany as "an earthshaking new kind of" writers, and leaders of the New Wave. [18] Aldiss supported the New Wave movement, helping the magazine New Worlds to get financial backing from a 1967 Arts Council grant and publishing some of his more experimental work in the magazine. [19]

In response to the results from the planetary probes of the 1960s and 1970s, which showed that Venus was completely unlike the hot, tropical jungle usually depicted in science fiction, Aldiss and Harrison edited an anthology Farewell, Fantastic Venus!, reprinting stories based on the pre-probe ideas of Venus. He also edited, with Harrison, a series of anthologies The Year's Best Science Fiction (Nos. 1–9, 1968–1976). [20]

Aldiss travelled to Yugoslavia, where he met fans in Ljubljana, Slovenia and published a travel book about Yugoslavia entitled Cities and Stones (1966), his only work in the genre. [22] He published an alternative-history fantasy story, "The Day of the Doomed King" (1968), about Serbian kings in the Middle Ages, and wrote a novel called The Malacia Tapestry , about an alternative Dalmatia.

In addition to a highly successful career as a writer, Aldiss was an accomplished artist. His first solo exhibition, The Other Hemisphere, was held in Oxford, August–September 2010, and the exhibition's centrepiece Metropolis (see figure) has since been released as a limited edition fine art print. [23] (The exhibition title denotes the writer/artist's notion, "words streaming from one side of his brain inspiring images in what he calls 'the other hemisphere'".) [23]

In 1965, he married his second wife, Margaret Christie Manson (daughter of John Alexander Christie Manson, an aeronautical engineer), [25] a Scottish woman and secretary to the editor of the Oxford Mail ; Aldiss was 40, and she 31. [12] They lived in Oxford and had two children together, Tim and Charlotte. [12] [24] She died in 1997. [12]

Aldiss was the "Permanent Special Guest" at the annual International Conference on the Fantastic in the Arts (ICFA) from 1989 through 2008. He was also the Guest of Honor at the conventions in 1986 and 1999. [29]

He was awarded the title of Officer of the Order of the British Empire (OBE) for services to literature in the 2005 Birthday Honours list. [32]

In January 2007 he appeared on Desert Island Discs . His choice of record to 'save' was "Old Rivers" sung by Walter Brennan, his choice of book was John Heilpern's biography of John Osborne, and his luxury a banjo. The full selection of eight favourite records is on the BBC website. [33]

On 1 July 2008 he was awarded an honorary doctorate by the University of Liverpool in recognition of his contribution to literature. [34] The Brian W Aldiss Archive at the university holds manuscripts from the period 1943–1995. [35]

Aldiss sat on the Council of the Society of Authors. [37]

Aldiss was the author of over 80 books and 300 short stories, as well as several volumes of poetry. [5] James Benjamin Blish was an American science fiction and fantasy writer. He is best known for his Cities in Flight novels, and his series of Star Trek novelizations written with his wife, J. A. Lawrence. He is credited with creating the term "gas giant" to refer to large planetary bodies.

Harry Max Harrison was an American science fiction author, known mostly for his character The Stainless Steel Rat and for his novel Make Room! Make Room! (1966). The latter was the rough basis for the motion picture Soylent Green (1973). Long resident in both Ireland and the United Kingdom, Harrison was involved in the foundation of the Irish Science Fiction Association, and was, with Brian Aldiss, co-president of the Birmingham Science Fiction Group.

The Bicentennial Man and Other Stories is a science fiction anthology written and edited by Isaac Asimov. Following the usual form for Asimov collections, it consists of eleven short stories and a poem surrounded by commentary describing how each came to be written.

Michael Lawson Bishop is an American writer. Over four decades and in more than thirty books, he has created what has been called a "body of work that stands among the most admired and influential in modern science fiction and fantasy literature."

Craig Kee Strete is an American science fiction writer of Cherokee descent. He is noted for his use of American Indian themes and has had multiple Nebula Award nominations. 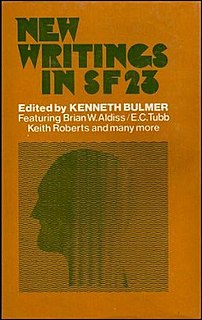 New Writings in SF 24 is an anthology of science fiction short stories edited by Kenneth Bulmer, the third volume of nine he oversaw in the New Writings in SF series in succession to the series' originator, John Carnell. It was first published in hardcover by Sidgwick & Jackson in April 1974, followed by a paperback edition under the slightly variant title New Writings in SF - 24 issued by Corgi in 1975. 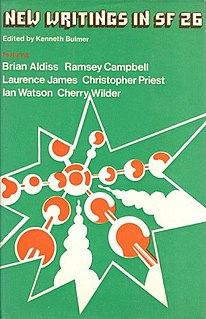 The 1975 Annual World's Best SF is an anthology of science fiction short stories edited by Donald A. Wollheim and Arthur W. Saha, the fourth volume in a series of nineteen. It was first published in paperback by DAW Books in May 1975, followed by a hardcover edition issued in September of the same year by the same publisher as a selection of the Science Fiction Book Club. For the hardcover edition the original cover art of Jack Gaughan was replaced by a new cover painting by Richard V. Corben. The paperback edition was reissued by DAW in December 1980 under the variant title Wollheim's World's Best SF: Series Four, this time with cover art by Vicente Segrelles. A British hardcover edition was published by The Elmfield Press in November 1976 under the variant title The World's Best SF Short Stories No. 2.

The 1977 Annual World's Best SF is an anthology of science fiction short stories edited by Donald A. Wollheim and Arthur W. Saha, the sixth volume in a series of nineteen. It was first published in paperback by DAW Books in May 1977, followed by a hardcover edition issued in September of the same year by the same publisher as a selection of the Science Fiction Book Club. For the hardcover edition the original cover art of Jack Gaughan was replaced by a new cover painting by Richard V. Corben. The paperback edition was reissued by DAW in 1983 under the variant title Wollheim's World's Best SF: Series Six, this time with cover art by Bernal. A British hardcover edition was published by Dennis Dobson in November 1979 under the variant title The World's Best SF 4. 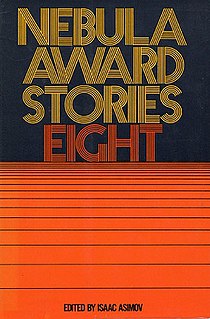 Nebula Award Stories Eight is an anthology of science fiction short works edited by American writer Isaac Asimov. It was first published in hardcover in November 1973, in the United States by Harper & Row and in the United Kingdom by Gollancz. The British edition bore the variant title Nebula Award Stories 8. Paperback editions followed from Berkley Medallion in the U.S. in September 1975, and Panther in the U.K. in the same year; both paperback editions adopted the British version of the title. The book has also been published in German. 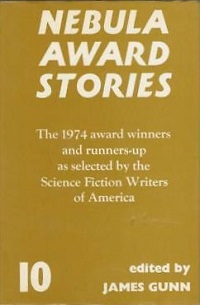 Nebula Award Stories 10 is an anthology of award-winning science fiction short works edited by James Gunn. It was first published in the United Kingdom in hardcover by Gollancz in November 1975. The first American edition was published in hardcover by Harper & Row in December of the same year. Paperback editions followed from Berkley Medallion in the U.S. in December 1976, and Corgi in the U.K. in June 1977. The American editions bore the variant title Nebula Award Stories Ten. The book has also been published in German.

Nebula Awards Showcase 2001 is an anthology of science fiction short works edited by Robert Silverberg. It was first published in hardcover and trade paperback by Harcourt in April 2001.

Nebula Award Stories 4 is an anthology of award-winning science fiction short works edited by Poul Anderson. It was first published in the United Kingdom in hardcover by Gollancz in November 1969. The first American edition was published by Doubleday in December of the same year. Paperback editions followed from Pocket Books in the U.S. in January 1971, and Panther in the U.K. in December 1971. The American editions bore the variant title Nebula Award Stories Four. 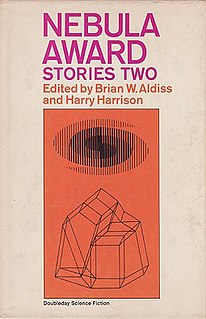 Depending on the counting convention used, and including all titles, charts, and edited collections, there may be currently over 500 books in Isaac Asimov's bibliography— as well as his individual short stories, individual essays, and criticism. For his 100th, 200th, and 300th books, Asimov published Opus 100 (1969), Opus 200 (1979), and Opus 300 (1984), celebrating his writing.