William Brian Binnie (April 26, 1953 – September 15, 2022) was a United States Navy officer and one of the test pilots for SpaceShipOne, the experimental spaceplane developed by Scaled Composites and flown from 2003 to 2004.

Binnie was born in West Lafayette, Indiana, on April 26, 1953, [1] where his Scottish father William P. Binnie was a professor of physics at Purdue University. The family returned to Scotland when Binnie was five, and lived in Aberdeen (his father taught at Aberdeen University) and later in Stirling. [2] When Binnie was a teenager the family moved to Boston. [3]

Binnie earned a bachelor's degree in aerospace engineering from Brown University. He earned a master's degree from Brown in fluid mechanics and thermodynamics. Binnie was rejected by the United States Air Force, and enrolled at Princeton University, where he earned a master's degree in mechanical and aerospace engineering [3] He served for 21 years in the United States Navy as a naval aviator, reaching the rank of commander. [4] He flew the A-7 Corsair II, A-6 Intruder, F/A-18 Hornet, and AV-8B Harrier II. He graduated from the U.S. Naval Test Pilot School in 1988. Binnie also copiloted the Atmospheric Test Vehicle of the Rotary Rocket. In 2006, he received an honorary degree from the University of Aberdeen. [5]

On December 17, 2003, the 100th anniversary of the Wright brothers' first powered flight, Binnie piloted the first powered test flight of SpaceShipOne, flight 11P, which reached a top speed of Mach 1.2 and a height of 12.9 miles (20.7 km). On October 4, 2004, he piloted SpaceShipOne's second Ansari X Prize flight, flight 17P, winning the X Prize and becoming the 436th person to go into space. His flight, which peaked at 367,442 feet (69.6 mi; 112.0 km), set a winged aircraft altitude record for suborbital flights, [6] breaking the old record set by the North American X-15 in 1963. [7] It also earned him the second Astronaut Badge to be given by the FAA for a flight aboard a privately operated commercial spacecraft. [8]

In 2014 Binnie joined XCOR Aerospace as senior engineer and test pilot, after working as a test pilot and program business manager for Scaled Composites for many years. [9] 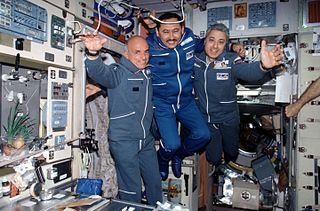 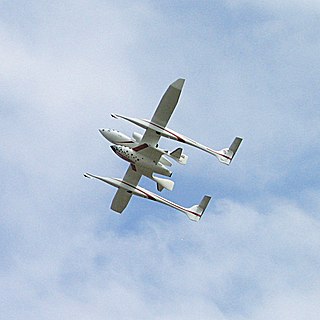 The Ansari X Prize was a space competition in which the X Prize Foundation offered a US$10,000,000 prize for the first non-government organization to launch a reusable crewed spacecraft into space twice within two weeks. It was modeled after early 20th-century aviation prizes, and aimed to spur development of low-cost spaceflight. 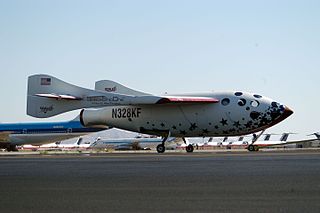 SpaceShipOne is an experimental air-launched rocket-powered aircraft with sub-orbital spaceflight capability at speeds of up to 3,000 ft/s (900 m/s), using a hybrid rocket motor. The design features a unique "feathering" atmospheric reentry system where the rear half of the wing and the twin tail booms folds 70 degrees upward along a hinge running the length of the wing; this increases drag while retaining stability. SpaceShipOne completed the first crewed private spaceflight in 2004. That same year, it won the US$10 million Ansari X Prize and was immediately retired from active service. Its mother ship was named "White Knight". Both craft were developed and flown by Mojave Aerospace Ventures, which was a joint venture between Paul Allen and Scaled Composites, Burt Rutan's aviation company. Allen provided the funding of approximately US$25 million. 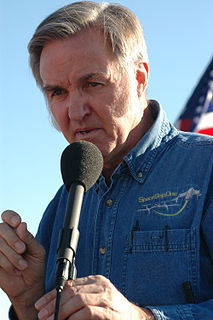 Elbert Leander "Burt" Rutan is a retired American aerospace engineer and entrepreneur noted for his originality in designing light, strong, unusual-looking, and energy-efficient air and space craft. He designed the record-breaking Voyager, which in 1986 was the first plane to fly around the world without stopping or refueling, and the Virgin Atlantic GlobalFlyer, which in 2006 set the world record for the fastest and longest nonstop non-refueled circumnavigation flight in history. In 2004, Rutan's sub-orbital spaceplane design SpaceShipOne became the first privately funded spacecraft to enter the realm of space, winning the Ansari X-Prize that year for achieving the feat twice within a two-week period.

Peter Siebold is a member of the Scaled Composites astronaut team. He is their Director of Flight Operations, and was one of the test pilots for SpaceShipOne and SpaceShipTwo, the experimental spaceplanes developed by the company. On April 8, 2004, Siebold piloted the second powered test flight of SpaceShipOne, flight 13P, which reached a top speed of Mach 1.6 and an altitude of 32.0 kilometres (105,000 ft). On October 31, 2014, Siebold and Michael Alsbury were piloting the SpaceShipTwo VSS Enterprise on flight PF04, when the craft came apart in mid-air and then crashed, killing Alsbury and injuring Siebold. 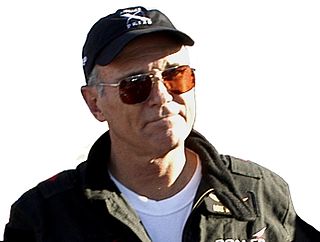 Michael Winston Melvill is a world-record-breaking pilot and one of the test pilots for SpaceShipOne, the experimental spaceplane developed by Scaled Composites. Melvill piloted SpaceShipOne on its first flight past the edge of space, flight 15P on June 21, 2004, thus becoming the first commercial astronaut, and the 435th person to go into space. He was also the pilot on SpaceShipOne's flight 16P, the first competitive flight in the Ansari X Prize competition.

The Mojave Air and Space Port at Rutan Field is in Mojave, California, United States, at an elevation of 2,801 feet (854 m). It is the first facility to be licensed in the United States for horizontal launches of reusable spacecraft, being certified as a spaceport by the Federal Aviation Administration on June 17, 2004. The facility covers 2,998 acres and has three runways.

Tier One was a Scaled Composites' 1990s–2004 program of suborbital human spaceflight using the reusable spacecraft SpaceShipOne and its launcher White Knight. The craft was designed by Burt Rutan, and the project was funded 20 million US Dollars by Paul Allen. In 2004 it made the first privately funded human spaceflight and won the 10 million US Dollars Ansari X Prize for the first non-governmental reusable manned spacecraft.

Flight 11P of SpaceShipOne was its eighth independent flight, its first powered flight, and the first privately funded crewed flight to reach supersonic speeds. It occurred on December 17, 2003. 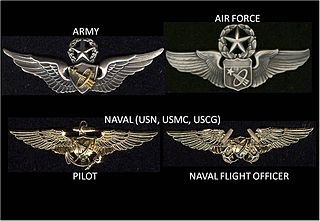 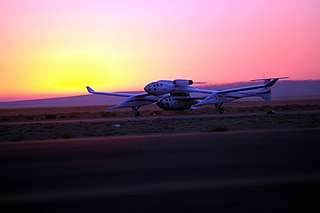 Flight 17P of SpaceShipOne was a spaceflight in the Tier One program that took place on October 4, 2004. It was the second competitive flight in the Ansari X Prize competition to demonstrate a non-governmental reusable crewed spacecraft, and is hence also referred to as the X2 flight. It was a successful flight, winning the X PRIZE. Virgin Galactic is an American spaceflight company founded by Richard Branson and his British Virgin Group retains an 11.9% stake through Virgin Investments Limited. It is headquartered in California, USA, and operates from New Mexico. The company is developing commercial spacecraft and aims to provide suborbital spaceflights to space tourists. Virgin Galactic's suborbital spacecraft are air launched from beneath a carrier airplane known as White Knight Two. Virgin Galactic‘s maiden spaceflight occurred in 2018 with its VSS Unity spaceship. Branson had originally hoped to see a maiden spaceflight by 2010, but the date was delayed for several years, primarily due to the October 2014 crash of VSS Enterprise. 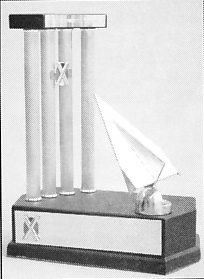 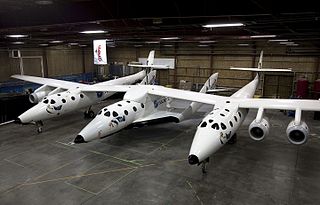 The Scaled Composites Model 339 SpaceShipTwo (SS2) is an air-launched suborbital spaceplane type designed for space tourism. It is manufactured by The Spaceship Company, a California-based company owned by Virgin Galactic.

The Scaled Composites Model 348 White Knight Two (WK2) is a quadjet cargo aircraft that is used to lift the SpaceShipTwo spacecraft to release altitude. It was developed by Scaled Composites from 2007 to 2010 as the first stage of Tier 1b, a two-stage to suborbital-space crewed launch system. WK2 is based on the successful mothership to SpaceShipOne, White Knight, which itself is based on Proteus. 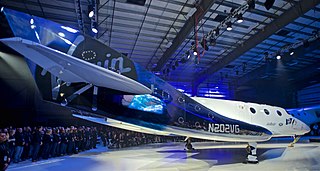 Virgin Galactic Unity 22 was a sub-orbital spaceflight of the SpaceShipTwo-class VSS Unity which launched on 11 July 2021. The crew consisted of pilots David Mackay and Michael Masucci as well as passengers Sirisha Bandla, Colin Bennett, Beth Moses, and Richard Branson.