Brian Christopher Lawler [1] (January 10, 1972 – July 29, 2018) [1] was an American professional wrestler. He is best remembered for his career in the World Wrestling Federation (now WWE), where he performed as Brian Christopher and Grand Master Sexay. Lawler was a one-time WWF Tag Team Champion as part of Too Cool with Scotty 2 Hotty, and won 44 titles within the United States Wrestling Association, the promotion formerly co-owned by his father, professional wrestler Jerry Lawler. [1]

Lawler began his career as one half of the masked tag team "The Twilight Zone" with Tony Williams under the individual ring names of Nebula (Lawler) and Quasar (Williams). After they were unmasked, Brian continued to wrestle in the United States Wrestling Association under the name "Too Sexy" Brian Christopher. He feuded with wrestlers such as Jeff Jarrett, Bill Dundee, Tom Prichard, and The Moondogs, and his father Jerry Lawler. Among his partners were Tony Williams (as the New Kids), Doug Gilbert, Scotty Flamingo, and "Hot Stuff" Eddie Gilbert.

Lawler, still known as Brian Christopher, joined the World Wrestling Federation (WWF) in 1997 and began competing in the light heavyweight division. Taka Michinoku defeated him in the finals of a tournament for the Light Heavyweight Championship. In mid-1998, he started teaming up with Scott "Too Hot" Taylor to form the tag team Too Much. When he was known as Brian Christopher, his father Jerry Lawler would talk him up as being superior to all the other Light Heavyweights but never publicly acknowledged that Brian was his son, although after Paul Heyman revealed that fact on Raw, Jim Ross (Jerry's broadcast partner) always hinted at it. Often a running joke was that someone (usually a commentator) would mention their relationship, which led to both of them adamantly denying that they were related.

On the June 13, 1999, episode of Heat , Brian and Scott adopted the ring names Grandmaster Sexay and Scotty 2 Hotty, returning after a hiatus. Their tag team was renamed Too Cool, and they were later joined by Rikishi. They defeated Edge and Christian in May 2000 on Raw to become the Tag Team Champions. They were even occasionally involved with top-card feuds, notably being enemies to the McMahon-Helmsley Faction and their associates, such as The Radicalz, Edge and Christian, and T & A. The trio's run ended in late 2000 when Rikishi was revealed as the man behind the wheel of the car that hit Stone Cold Steve Austin at Survivor Series. Shortly after, Rikishi turned on his teammates. While Scotty was sidelined in 2001 with a broken ankle, Lawler formed a short-lived tag team with Steve Blackman and was later released from the company for illegally conveying drugs across the Canada–United States border. [2]

On February 24, 2002, at the second World Wrestling All-Stars (WWA) pay per view in Las Vegas, Lawler wrestled WWA Heavyweight Champion Jeff Jarrett for the title, but lost. In April 2002, Lawler wrestled in a fatal-four-way match for the championship at a house show but lost to Nathan Jones, Scott Steiner and Jarrett. From June 2002 until April 2004, he worked for Total Nonstop Action Wrestling as Brian Lawler. He formed a group called Next Generation with fellow second generation stars David Flair and Erik Watts. They were involved in a rivalry with Dusty Rhodes and harassed him with a replica of the NWA World Title belt that he wore when he was champion.

In April 2004, Lawler was signed back to the WWE roster as Jim Ross's last act as head of WWE Talent Relations. He only appeared in four matches: against Kane, Wavell Starr, Christian, and Garrison Cade. He was later released after only one month with the company after John Laurinaitis took over as head of WWE Talent Relations. Prior to his release, Lawler was scheduled to take part in a Battle Royal for the number one contender for the World Heavyweight Championship, but he was replaced by Maven. After his departure from WWE, Lawler wrestled for several independent promotions, including Memphis Wrestling and UWF Live. Christopher usually worked with his teammates Rikishi and Scotty 2 Hotty, making several reunions of Too Cool.

On the March 14, 2011 episode of Raw, Lawler returned to the WWE as a heel in a segment between Michael Cole and his father, Jerry Lawler, where Brian would side with Cole, saying that he felt that Jerry never cared for him and that he was ashamed to be his son. Lawler indirectly agreed, telling Brian that he was a bigger screw-up than Charlie Sheen. Lawler returned to the WWE on January 6, 2014, appearing on the "Old School" edition of Raw and reuniting with Rikishi and Scotty 2 Hotty, for what would be the final time, to take on 3MB in a six-man tag team match. His team was successful in winning. He made what would be his final WWE appearance, on NXT Arrival in February 2014 as part of Too Cool in a losing effort as mystery opponents to The Ascension, who defended their NXT Tag Team Championship.

Lawler was a Pittsburgh Steelers fan, in stark contrast to his father, a diehard Cleveland Browns fan. According to his brother Kevin, Lawler was buried in a Steelers-themed casket with his ring name. [3]

Lawler was arrested in February 2009 for disorderly conduct. [4] On June 26, 2009, he was arrested for public intoxication just before 3 a.m. According to the police report, he "became very belligerent" once in custody and threatened the police officer who arrested him. [4] On July 13, 2009, he was jailed for 30 days after failing to attend an in-patient treatment center as part of his plea agreement. [5]

Around 1 a.m. EST on July 7, 2018, Lawler was again jailed for driving under the influence, and for evading police. [6] On the early morning of July 29, 2018, Lawler was found hanging in a cell at the Hardeman County Jail and was observed to be brain dead. [7] His life support was disabled few hours after his father Jerry Lawler had arrived to the hospital to see him. [8] Lawler was pronounced dead at around 4:40 p.m. EST at the age of 46. [9] On the one year anniversary of his death, Jerry Lawler filed a wrongful death lawsuit against Hardeman County, Hardeman County Sheriff John Doolen, and others for allegedly failing to protect Lawler. He alleged that Doolen had personally promised to "keep an eye" on Lawler after he was incarcerated. At his funeral, a little red wagon that he used to carry his numerous title belts to the ring in his USWA days was present, in memorial to the career of a decorated, respected, & well-liked wrestler. [10]

Jerry O'Neil Lawler, better known as Jerry "The King" Lawler, is an American color commentator and retired professional wrestler. He is currently signed to WWE, where he performs on the commentary team. 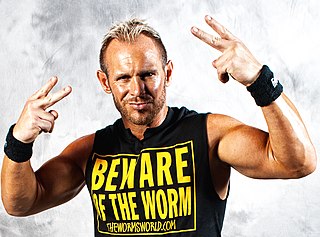 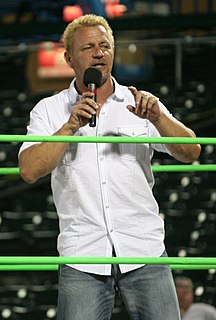 James Ware, better known by his ring name Koko B. Ware is a retired American professional wrestler. He debuted in 1978 and became widely popular in 1986, in the World Wrestling Federation, where he went from strong mid-carder to jobber to the stars. "The Birdman" came to the ring with a blue-and-yellow macaw named Frankie, both flapping and dancing before and after his matches. Before joining the WWF, he was in several tag teams, most notably with Bobby Eaton in Memphis and with Norvell Austin in several promotions. In 1993, he lost the first Monday Night Raw match to Yokozuna. 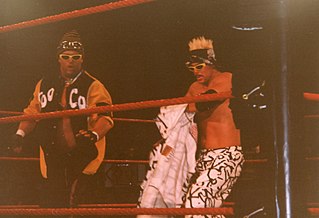 Too Cool, originally known as Too Much, was a professional wrestling tag team and group active in the World Wrestling Federation between 1998 and 2001 and for a short time in 2004 and 2014. The group contained members Grandmaster Sexay, Scotty 2 Hotty, and Rikishi. 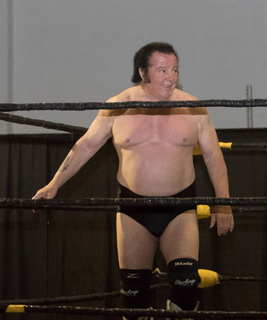 Kelly Warren Wolfe is an American professional wrestler. Wolfe is perhaps best known for his appearances with the World Wrestling Federation (WWF) and Extreme Championship Wrestling (ECW) under the ring name Wolfie D, as well as for his appearances with Total Nonstop Action Wrestling under the ring name Slash. He is a former NWA World Tag Team Champion and one-half of the reigning Traditional Championship Wrestling tag team champions. 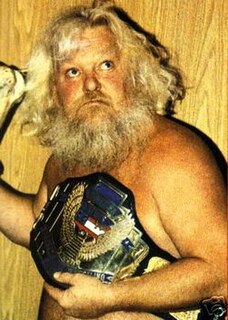 C.W. Bergstrom is a semi-retired American professional wrestler who was active in North American regional promotions during the early 1990s including a memorable stint in the United States Wrestling Association (USWA) as Principal Bergstrom. He was one of the last major stars in Don Owen's Pacific Northwest Wrestling during its final years and was the last to hold the NWA Pacific Northwest Heavyweight Championship.

Lanny Neal Kean Jr. was an American professional wrestler. He is best known for his appearances with the World Wrestling Federation from 1985 to 1986 under the ring name Cousin Junior, as well as for his appearances on the independent circuit as Moondog Cujo, a member of The Moondogs.