Brian Robinson (born 20 March 1966) is a former Irish rugby union international player who played for the Irish national rugby union team as a number eight. [1] He played for Ireland from 1991 to 1994, winning 25 caps and scoring 6 tries, after making his debut in February 1991 against France in a 21–13 defeat. He was part of the Ireland squad at the 1991 Rugby World Cup where he scored four tries in a match against Zimbabwe. [2]

Robinson was born in Belfast, and was a pupil at Cambridge House Grammar School in Ballymena. He is head of Physical Education at Campbell College Belfast, he also is master in charge of rugby and the 1XV Head Coach. He has enjoyed recent Schools Cup success with wins in 2011 and 2018. A true servant to the game.

Ballymena Academy is a mixed gender grammar school located in the market town of Ballymena in County Antrim, Northern Ireland. It was founded in the early nineteenth century as a small provincial school for children in the town and surrounding agricultural hinterland.

Rob Dewey is a Scottish former rugby union player and played for the Glasgow Warriors. Despite having only come onto the professional rugby scene in the 2005–06 season, a lethal combination of pace and power gave him a name amongst the Scottish rugby community.

Cambridge House Grammar School is a mixed grammar school in the County Antrim town of Ballymena, Northern Ireland, within the North Eastern Region of the Education Authority.

Neil Best is a rugby union footballer, who attended Wellington College Belfast and played his school rugby there until he left in 1997 after upper sixth. The last professional team he played for was London Scottish and previously played on the Irish national team. He played as a flanker.

Neil George Doak is a Northern Irish former cricketer and rugby union player. He currently works as a rugby union coach, and has served as attack and backs coach with English club side Worcester Warriors, and Georgia during the 2020 Autumn Nations Cup. Doak previously worked as attack and backs coach of Irish provincial side Ulster from 2008 to 2017, where he also spent his professional playing career. During his time with Ulster, he had brief stints as a coach with Ireland and Emerging Ireland. 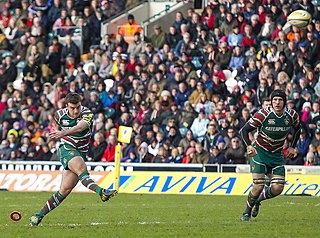 Rory Scholes is an Irish rugby union player. He plays primarily as a wing, but also covers fullback. Scholes currently plays for CA Brive. He has previously played for his native province of Ulster, Scottish side Edinburgh and another Irish provincial side Connacht in the Pro14.

Sammy Arnold is an English-born, Irish rugby union player for Connacht in the Pro14. He plays as a centre and represents Garryowen in the All-Ireland League.

Conor Carey is an English-born Irish professional rugby union player. He primarily plays as a prop. Carey currently plays for English Premiership side Worcester Warriors. He previously played for Irish provincial side Connacht in the Pro14, and before that played for Nottingham and Ealing Trailfinders in the English Championship. Raised in Belfast, Carey started his career playing under-age rugby with Ulster and represented Ireland internationally up to under-20 level.

Angus Kernohan is an Irish rugby union player playing for RFU Championship side Ealing Trailfinders. He plays as a winger, but can also play at centre.

Stewart Moore is an Irish rugby union player, who is currently a member of the Ulster academy. He plays as a centre and represents Malone in the All-Ireland League.