Brisbane (pron. /ˈbrɪzbeɪn/ BRIZ-bayn, unlike Brisbane, Queensland, Australia, pron. /ˈbrɪzbən/ BRIZ-ben) is a small city located in California in the northern part of San Mateo County on the lower slopes of San Bruno Mountain. It is located on the southern border of San Francisco, on the northeastern edge of South San Francisco, next to San Francisco Bay and near San Francisco International Airport. The population was 4,282 as of the 2010 census.

Brisbane is called "The City of Stars" because of a holiday tradition established over 69 years ago. At the start of the Christmas/Hanukkah season, many residents and business owners place large, illuminated stars, some as big as 10 feet (3.0 m) or more in diameter, on the downhill sides of homes and offices throughout Brisbane. Many of the stars are kept up all year.

According to the United States Census Bureau, the city has a total area of 20.1 square miles (52 km2), of which 3.1 square miles (8.0 km2) is land and 17.0 square miles (44 km2) (84.58%) is water, the latter the Brisbane Lagoon. A remnant of San Francisco Bay, the Lagoon was formed by the construction of the U. S. Highway 101 causeway, and became diminished as most of its north and central portions were filled with landfill. [4] Brisbane sits at the southeast corner of the Guadalupe Valley.

Guadalupe Valley Creek is a small creek which flows east through Brisbane along the north flank of San Bruno Mountain and enters the Brisbane Lagoon after passing under the Tunnel Avenue bridge.

The first recorded inhabitants were the Costanoan Indians. They built dome-shaped dwellings of boughs and tules. By 1776, Spanish explorers had arrived and the Franciscan missionaries soon followed leaving numerous large land grants in their wake. With Mexican rule, the lands controlled by the Mission were released to private enterprise.

Brisbane was originally part of Rancho Cañada de Guadalupe la Visitación y Rodeo Viejo, a large tract of land that included the Cañada de Guadalupe (now Guadalupe Valley), and also the Bayshore district of Daly City, the Visitacion Valley district of San Francisco, and San Bruno Mountain. Visitacion City, as it was initially known, was platted in 1908 [5] adjacent to a new rail line that had been completed in 1907 to the east of the town site. The Southern Pacific Railroad built the new line to create a faster and more direct route into San Francisco. The railroad also planned to build extensive terminal facilities just north of the town site. [6] The Visitacion Valley rail yard and locomotive works were expected to employ over 1,000 workers, but construction was halted soon after it began due to the Panic of 1907. [7] The town site remained largely undeveloped for many years. [5] The railroad resumed construction of the yard and shops during World War I, and the facilities were completed by 1918. [7]

The city is served by San Mateo County Libraries.

In the 1920s Arthur Annis [8] proposed the name change from Visitacion City to Brisbane. Annis regarded the name Visitacion City as a handicap "being so close to a San Francisco city district with a similar name", which he felt would confuse people and prevent "Brisbane" from establishing its own unique identity. Accounts of how the city acquired its name vary. According to his daughter, the city was named for Brisbane, Queensland, [9] perhaps due to the area's resemblance to that port city at the time. [10] Another story holds that it was named for newspaper columnist Arthur Brisbane. [11]

In the 1930s, the city was home to several slaughterhouses. Animals kept at the nearby Cow Palace were butchered in Brisbane, and the meat was loaded onto railway cars for transport.[ citation needed ]

In the United States House of Representatives, Brisbane is in California's 14th congressional district , represented by Democrat Jackie Speier. [16]

The mayor is Terry O'Connell, and Karen Cunningham is Mayor Pro Tempore. [17]

SamTrans provides bus service through the city along Bayshore Boulevard. Shuttles connecting to nearby BART, Muni T-Third Street line and Caltrain stations are available to residents and employees in the city.

Brisbane's economy is dominated by office parks at Sierra Point and an industrial park around the Valley Drive corridor. There are commercial areas at Brisbane Village, Visitacion Avenue, and Bayshore Avenue. The population of Brisbane doubles during the work day as such facilities fill up with commuters. Some of the larger office tenants in Brisbane are Cutera Inc. (Medical Lasers), Dolby, Tercica, Sing Tao, and Intermune. Monster Cable Products and bebe stores (traditionally spelled in lowercase) are headquartered in Brisbane on Valley Drive. The Sierra Point office park area is home to a number of well-known class A office buildings like the Dakin Building. [19]

Universal Paragon's proposed 659-acre (2.67 km2) Brisbane Baylands project, if approved by Brisbane voters, proposes to more than double the existing employment base of the City by providing new office, research & development, retail, hotel and other land uses that are accessible by a proposed multi-modal transit station (Caltrain, Muni T-Third light rail and proposed Bus Rapid Transit). [20] [21] Houses are quite expensive, as the average home cost is around $639,000. This compared to the California average of $393,000 follows a common home price trend in the surrounding areas.

Brisbane California is home to the San Bruno Mountain as well as a number of city parks. San Bruno Mountain is known for its views of the city, and the native Mission Blue butterfly. City parks in Brisbane include the Community Park in the center of town (1 Visitacion Ave.) the Fire Hydrant Plug Preserve (300 Mariposa St.) and Firth Park (100 Lake St.) and The Brisbane Dog Park ( 50 Park Pl.) [22]

According to the City's 2018 Comprehensive Annual Financial Report, [23] the top employers in the city are:

In 1989, north of Sierra Point Humphrey the whale was beached on a mudflat after an anomalous journey into the San Francisco Bay. His rescue was filmed for national TV and witnessed by hundreds of onlookers from the upper floors of the Dakin Building. The rescue was carried out by staff of The Marine Mammal Center and United States Coast Guard.

The city is served by the Brisbane Public Library of the San Mateo County Libraries, a member of the Peninsula Library System. 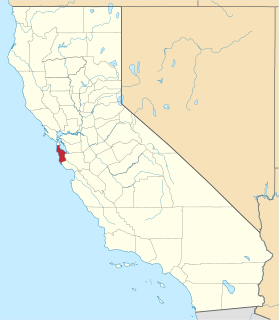 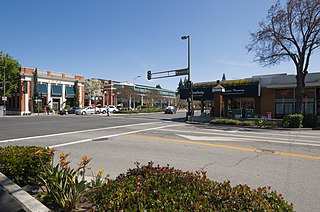 Menlo Park is a city located at the eastern edge of San Mateo County within the San Francisco Bay Area of California in the United States. It is bordered by San Francisco Bay on the north and east; East Palo Alto, Palo Alto, and Stanford to the south; Atherton, North Fair Oaks, and Redwood City to the west. Menlo Park is one of the most educated cities in the state of California and the United States; nearly 70% of residents over the age of 25 have earned a bachelor's degree or higher. Menlo Park had 32,026 inhabitants according to the 2010 United States Census, which had grown to an estimated 34,698 inhabitants by 2019. The city is home to the corporate headquarters of Facebook and where Google and Round Table Pizza were founded. 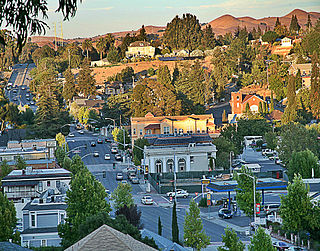 Pinole is a city in Contra Costa County, California, United States. The population was 18,390 at the 2010 census. 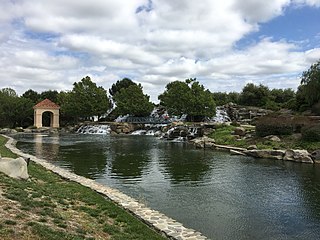 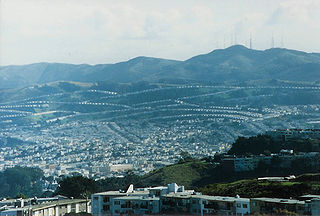 Daly City is the largest city in San Mateo County, California, United States, with an estimated 2019 population of 106,280. Located in the San Francisco Bay Area, and immediately south of San Francisco, it is named in honor of businessman and landowner John Donald Daly. 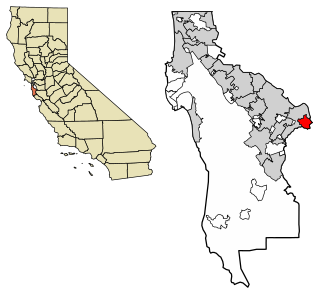 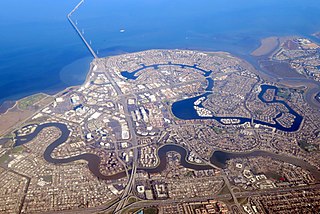 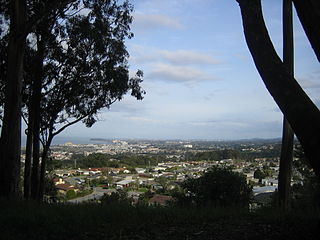 Millbrae is a city located in northern San Mateo County, California, United States. To its northeast is San Francisco International Airport, San Bruno is on its northwest, and Burlingame on its southeast. It's bordered by San Andreas Lake to the southwest. The population was 21,536 at the 2010 census. 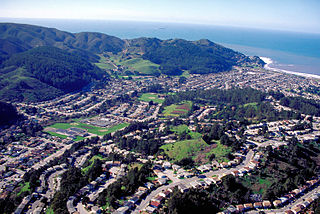 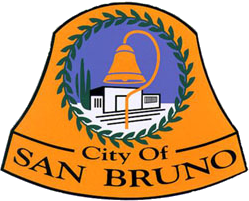 San Bruno is a city in San Mateo County, California, United States, incorporated in 1914. The population was 41,114 at the 2010 United States Census. The city is located between South San Francisco and Millbrae, adjacent to San Francisco International Airport and Golden Gate National Cemetery, and is approximately 12 miles (19 km) south of downtown San Francisco.

Los Alamos is a census-designated place (CDP) in Santa Barbara County, California, United States. Although located in the Los Alamos Valley, the town of Los Alamos is usually considered to be a part of the Santa Ynez Valley community. Los Alamos is also connected to other cities Vandenberg AFB, Lompoc, Buellton, Solvang, and other Santa Barbara County cities. It is 140 miles northwest of Los Angeles and 281 miles (452 km) south of San Francisco. The population was 1,890 at the 2010 census, up from 1,372 at the 2000 census. 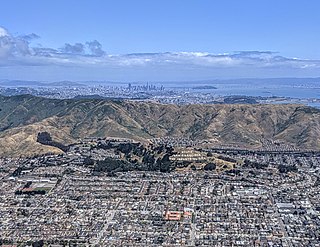 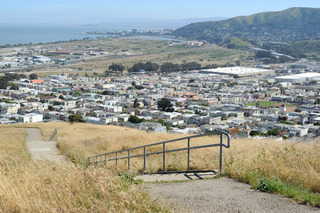 Visitacion Valley, colloquially referred to as Viz Valley, is a neighborhood located in the southeastern quadrant of San Francisco, California. 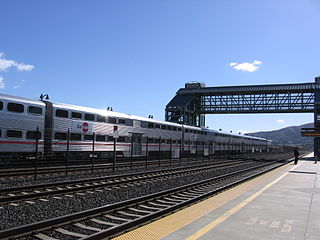 Bayshore is a Caltrain commuter rail station on the border of San Francisco, California and Brisbane, California. The parking lot and about the northern quarter of the platforms are in the Visitacion Valley District of San Francisco; the remainder is in Brisbane. The official address is in San Francisco.

The Brisbane Baylands is a 660-acre (270 ha) parcel of land in Brisbane, just south of the San Francisco border. There have been several proposals to develop the site, which was previously used as a railyard and a municipal landfill; historical uses have led to contaminated soil, polluted stormwater runoff, and potential buried toxic waste. None of the present proposals have been approved by Brisbane's city council.

The 2010 United States Census reported that San Francisco had a population of 805,235. With a population density of 17,160 per square mile (6,632/km2), San Francisco is the second-most densely populated major American city, behind only New York.

The Bayshore Cutoff is the rail line between San Francisco and San Bruno along the eastern shore of the San Francisco Peninsula. It was completed by Southern Pacific (SP) in 1907 at a cost of $7 million, and included five tunnels, four of which are still used by Caltrain, the successor to Southern Pacific's Peninsula Commute service. Fill from the five tunnels was used to build the Visitacion or Bayshore Yard, the main SP classification yard near the city of Brisbane. The Del Monte was similarly rerouted over the line at some point in its operational history.