Bronisław Trzebunia (born 15 September 1941) is a Polish alpine skier. He competed in three events at the 1964 Winter Olympics. [1]

Filbert Bayi Sanka is a Tanzanian former middle-distance runner who competed throughout the 1970s. He set the world records for 1500 metres in 1974 and the mile in 1975. He is still the 1500 m Commonwealth Games record holder. 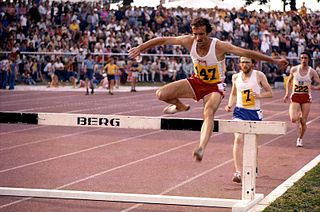 Sven Anders Gärderud is a Swedish former track and field athlete, winner of the 3000 m steeplechase event at the 1976 Summer Olympics in Montreal.

Bronisław "Bronek" Czech was a Polish sportsman and artist. A gifted skier, he won championships of Poland 24 times in various skiing disciplines, including Alpine skiing, Nordic skiing and ski jumping. A member of the Polish national team at three consecutive Winter Olympics, he was also one of the pioneers of mountain rescue in the Tatra Mountains and a glider instructor. He perished in the Auschwitz concentration camp.

The men's ski jumping at the 1928 Winter Olympics took place at the 70-meter (230 ft) Olympiaschanze in St. Moritz, Switzerland, on 18 February. Thirty-eight competitors from thirteen nations competed, with the event being won by Norway's Alf Andersen ahead of countryman Sigmund Ruud and Czechoslovakia's Rudolf Burkert.

Bronisław Wołkowicz is a Polish judoka. He competed in the men's half-middleweight event at the 1996 Summer Olympics.

Józef Bronisław Tracz is a Polish wrestler who has won three Olympic medals.

Bronisław Bebel is a former Polish volleyball player, a member of Polish national team in 1968–1978, Olympic Champion 1976, silver medalist of the European Championship 1977.

Jolanta Bebel is a Polish fencer. She competed in the women's team foil events at the 1972 and 1976 Summer Olympics.

Stanisław Kazimierz Gościniak is a former Polish volleyball player, coach, a member of Polish national team in 1965-1974 and coach, World Champion 1974, silver medalist of the World Cup 1965, bronze medalist of the European Championship 1967. He also competed at the 1968 Summer Olympics and the 1972 Summer Olympics.

Teresa Trzebunia is a Polish cross-country skier. She competed in three events at the 1964 Winter Olympics.

Trzebunia is a Polish-language surname typical for Goral population of Zakopane region. Notable people with this surname include:

Bronisław Karwecki was a Polish rower. He competed in the men's coxed four at the 1936 Summer Olympics.

The following teams and players took part in the men's volleyball tournament at the 1972 Summer Olympics, in Munich.

The following teams and players took part in the men's volleyball tournament at the 1976 Summer Olympics, in Montreal.