Broomhedge is a small village in County Antrim, Northern Ireland, near Lisburn, approximately 12 miles (19 km) southwest of Belfast. It lies within the Lisburn City Council area, and the Maghaberry electoral ward.

In the 2001 Census, the output area which contained Broomhedge (see here) had a population of 403. Of these:

The boundaries of the hamlet of Broomhedge do not exactly correspond with those of the Church of Ireland parish of the same name. Indeed, Broomhedge per se straddles the boundary between the postal districts of Lisburn and Moira (Craigavon), and encompasses several townlands. The exact boundaries depend on whether Upper Broomhedge and Lurganure are considered separately, and the issue is further complicated by the close proximity of Mazetown and the River Lagan which separates counties Antrim and Down. Broomhedge is situated within the Upper Massereene barony.

The only school situated within Broomhedge itself is the new Brookfield Special School, the construction of which was recently completed on the site of the former Broomhedge P.S. [1] Therefore, most children travel to school elsewhere in the Lisburn area, Moira or further afield.

Broomhedge F.C. plays in the Mid-Ulster Football League at Anvil Park. The world famous Irish band, the Shamrock Tenors [5] are said to be fans of the Anvils and, when not touring, can often be seen on the sideline cheering them on.

Broomhedge is accessible by turning off the M1 at Sprucefield and reaching the Lurganure Road (later becoming the Halfpenny Gate Road) via Blaris. The nearest train stops are at Moira and Lisburn; Broomhedge Halt railway station opened on 29 April 1935, but eventually closed on 3 July 1973. [6]

There are two main churches in the area: St Matthew's Parish Church (Church of Ireland, Connor diocese), and Broomhedge Methodist. There is also a Plymouth Brethren gospel hall.

Originally part of Blaris parish, the church of St Matthew was erected as a chapel of ease to cover the Broomhedge area. The foundation stone was laid in 1839, the church was in use by 1841 and was officially consecrated in September 1848. It was served by curates from Lisburn Cathedral until 1867 when Maurice Knox McKay was appointed as a perpetual curate. The parish itself was set up in 1880 with the Rev. John Leslie as the first rector, who served until his death in 1927. The current incumbent, Rev Peter Galbraith, has ministered in Broomhedge since 1991. In 2001 a new church hall was built, replacing the Bradbury Memorial Hall (built in 1951). [7]

The church was founded in 1751, though the current building was built in 1897. The present minister, the Rev Ed McDade, previously minister of Cullybackey Methodist Church, was installed at Broomhedge, Magheragall and Trinity on Sunday 13 July 2008. He succeeded the Rev Clive Webster, who preached his final sermon on Sunday 29 June 2008. The building is shared with Magheragall Methodist for evening services every second Sunday of the month. [8]

The assembly was formed in about 1890 and met in two different locations before the current hall was built in 1935. [9]

No other Christian or Christian-related denominations have meeting places in Broomhedge itself, so members of other churches generally travel elsewhere. For more information, see Churches in the Lisburn City Council area. 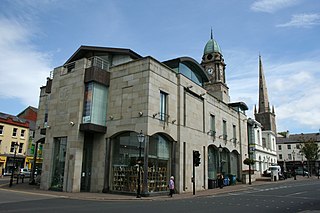 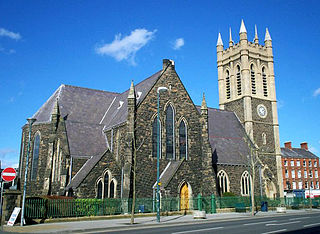 Craigavon is an incomplete planned settlement in northern County Armagh, Northern Ireland. Its construction began in 1965 and it was named after the first Prime Minister of Northern Ireland: James Craig, 1st Viscount Craigavon. It was intended to be the heart of a new linear city incorporating Lurgan and Portadown, but this plan was mostly abandoned and later described as having been flawed. Among local people today, "Craigavon" refers to the area between the two towns. It is built beside two artificial lakes and is made up of a large residential area (Brownlow), a second smaller one (Mandeville), plus a central area (Highfield) that includes a substantial shopping centre, a courthouse and the district council headquarters. The area around the lakes is a public park and wildlife haven made up of woodland with walking trails. There is also a watersports centre, golf course and ski slope in the area. In most of Craigavon, motor vehicles are completely separated from pedestrians, and roundabouts are used extensively.

Lagan Valley is a parliamentary constituency in the United Kingdom House of Commons. The current MP is Sir Jeffrey Donaldson of the DUP. 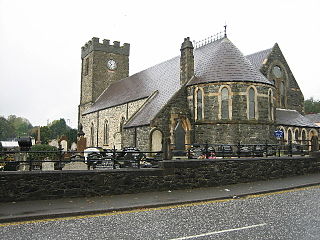 Dromore is a small market town and civil parish in County Down, Northern Ireland. It lies within the local government area of Armagh City, Banbridge and Craigavon Borough Council. It is 19 miles (31 km) southwest of Belfast, on the A1 Belfast–Dublin road. The 2011 Census recorded a population of 6,003.

James Harold McCusker was a Northern Ireland Ulster Unionist Party politician who served as the Deputy Leader of the UUP Assembly Group from 1982–86. 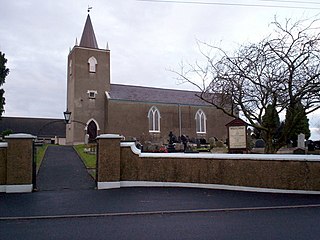 Aghalee is a village, townland and civil parish in County Antrim, Northern Ireland. It is three miles from the southeast corner of Lough Neagh on the main road between Lurgan and Antrim and about 13 kilometres west of Lisburn. The village lies on the steep wooded slopes of Friar's Glen and is beside the now disused Lagan Navigational Canal. In the 2001 Census, Aghalee had a population of 774.

Donaghcloney or Donacloney is a small village, townland and civil parish in County Down, Northern Ireland. It lies on the River Lagan between Lurgan and Dromore. In the 2011 Census it had a population of 1701.

Maghaberry or Magaberry is a village and townland in County Antrim, Northern Ireland. It is 9 kilometres (5.6 mi) west of Lisburn and 4 kilometres (2.5 mi) north of Moira. In the 2011 Census it had a population of 4,716 people. It is one of the biggest villages within the Lisburn and Castlereagh City Council area.

Derrytrasna is a small village and townland in County Armagh, Northern Ireland. The village is on a plateau surrounded mainly by bogland in the north of the county. It lies between Lough Neagh, Lough Gullion and the River Bann. In the 2001 Census it had a population of 249 people. Derrytrasna is within the Armagh City, Banbridge and Craigavon Borough Council area.

The A3 is a major road in Northern Ireland. It travels through County Antrim, County Down, County Armagh and parts of southern County Fermanagh.

Massereene Upper is a barony in County Antrim, Northern Ireland. To its east lies Belfast Lough, and it is bordered by four other baronies: Massereene Lower to the north; Belfast Upper to the east; Castlereagh Upper to the south-east; and Iveagh Lower, Lower Half to the south-west.

Blaris is a civil parish covering areas of both County Antrim and County Down, Northern Ireland. It is situated in the historic baronies of Castlereagh Upper and Iveagh Lower, Upper Half in County Down and Massereene Upper in County Antrim. It is also a townland of 543 acres, which contains the site of the Blaris medieval parish church, and is on the south-east side of the River Lagan, adjacent to Lisburn.

Dál mBuinne, alias Dál mBuain, meaning the "portion of Buinne", was a medieval Irish Cruthin petty-kingdom that was part of Dál nAraidi of Magh Line in the over-kingdom of Ulaid. Their eponymous ancestor was Buinn, son of the legendary Ulaid king Fergus mac Róich. It consisted in whole or part of a trícha cét. Dál mBuinne is Anglicised as Dalmunia and Dalboyn, the latter of which became the name of a medieval deanery.