Bruno Cremer was born in Saint-Mandé, Val-de-Marne, in the eastern suburbs of Paris, France. His mother, Jeanne Rullaert, a musician, was of Belgian Flemish origin and his father, Georges, was a businessman from Lille who, though born French, had taken out Belgian nationality after the French armed forces refused to accept him for service in the First World War. Bruno himself opted for French nationality when he reached the age of 18. His childhood was largely spent in Paris.

Bruno attended the Cours Hattemer, a private school. [1] Having completed his secondary studies, he followed an interest in acting which had interested him since the age of 12 and trained in acting from 1952 at France's highly selective Conservatoire national supérieur d'art dramatique (English: French National Academy of Dramatic Arts).

His career began with ten years spent acting in live theatre, playing roles drawn from works of Shakespeare, Oscar Wilde and Jean Anouilh. Aged already 30, he created the role of Thomas Becket in the 1959 world premiere of Anouilh's Becket , and held Anouilh in veneration all his life. Later Cremer played Max in a French production of Bent by Martin Sherman in 1981. He regarded his basic profession as that of a stage actor, though he gravitated firmly to films.

It was in 1957 that Cremer had his first credited part in a film, Quand la femme s'en mêle (When a woman meddles), which starred Alain Delon. However, it was in 1965 that Cremer's career really began to prosper, with the film La 317e section, (The 317th Platoon), directed by Pierre Schoendoerffer and set in Indochina during the French colonial wars. From then onwards, Cremer became a popular actor and appeared in over 110 productions for cinema and television.

Special Section (French original title: Section spéciale), released in 1975, is about a kangaroo court set up in collaborationist Vichy France to ensure judicial convictions of innocent people so as to mollify the Nazis. A French language film directed by the Greek-French film director Costa-Gavras, it features Cremer as Lucien Sampaix, a Communist-leaning journalist.

The 1980 film La légion saute sur Kolwezi (English Operation Leopard), directed by Raoul Coutard, is a documentary-style portrayal of a real-life operation headed by the French Foreign Legion in the Democratic Republic of the Congo in 1978 to rescue foreign hostages. Cremer plays a military commander. Pierre Schoendoerffer’s 2004 film Là-haut, un roi au-dessus des nuages (Above the Clouds), based on his own novel, Là-haut . Cremer played the Colonel.

Some 30 other film parts of Cremer included releases by both French and foreign directors. In 1967, for example, came the film The Stranger (Italian: Lo straniero), directed by Italian director Luchino Visconti, based on the novel L'Étranger by Albert Camus, and starring Marcello Mastroianni. The 1976 release The Good and the Bad (French Le Bon et les Méchants) was directed by Claude Lelouch, with Cremer playing Inspector Bruno Deschamps.

From 1991, he became a universally known figure in France and elsewhere for his televised portrayal of George Simenon's Commissaire Maigret, a role he played until 2005, totalling 54 episodes. During this period his cinema film commitments were few, though he did appear in 2000 with Charlotte Rampling in Under the Sand, written and directed by François Ozon, in 2001 in José Giovanni's Mon père, il m'a sauvé la vie, and in 2004 in Pierre Schoendoerffer’s Là-haut, un roi au-dessus des nuages (Above the Clouds).

In 2005, in the final episode of the Maigret series, his voice was doubled by that of Vincent Grass in Maigret et l'Étoile du Nord: Cremer was suffering from the throat cancer that made him decide to end his career.

Cremer was made an officer of the Légion d’honneur in 2008.

An inveterate smoker of Punch brand cigars, he died of a cancer of the tongue and the pharynx from which he had suffered for several years, [2] [3] [4] in a Paris hospital on Saturday, 8 August 2010, aged 80. His funeral service was held in Paris on 13 August 2010 at the church of Saint Thomas of Aquinas, in the VIIth arrondissement. He is buried in the Montparnasse cemetery, Paris.

His part autobiography appeared in 2000 under the title, Un certain jeune homme (A certain young man). In it he covered not the whole of his life, but only his early career, until the death of his father.

Married twice, Cremer had a son, Stéphane, by his first wife, and by his second wife, Chantal, whom he married in 1984, two daughters, Constance and Marie-Clementine. 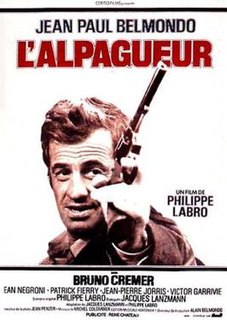 L'Alpagueur is a film written and directed by Philippe Labro and starring Jean-Paul Belmondo in the title role and Bruno Cremer as L'Epervier.

Patrick Chauvel is an independent war photographer whose career began when he was just 17 years old.

Pierre Schoendoerffer was a French film director, a screenwriter, a writer, a war reporter, a war cameraman, a renowned First Indochina War veteran, a cinema academician. He was president of the Académie des Beaux-Arts for 2001 and for 2007. 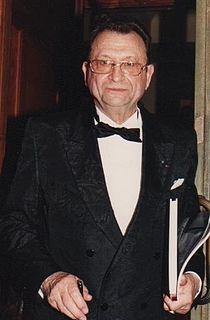 Pierre Granier-Deferre was a French film director and screenwriter

Richard Sadler is a producer, scenarist and film director.

Maigret Has Scruples is a detective novel by the Belgian writer Georges Simenon featuring his character Jules Maigret.

La légion saute sur Kolwezi, also known as Operation Leopard, is a French war film directed by Raoul Coutard and filmed in French Guiana. The script is based on the true story of the Battle of Kolwezi that happened in 1978. It was diligently described in a book of the same name by former 1st Foreign Parachute Regiment Captain Pierre Sergent. He published his book in 1979, and the film came out in 1980. Coutard shot the film in a documentary style.

Florence Darel is a French actress.