Maderna was born Bruno Grossato in Venice but later decided to take the name of his mother, Caterina Carolina Maderna. [1] [2] [ failed verification ] At the age of four he began studying the violin with his grandfather. "My grandfather thought that if you could play the violin you could then do anything, even become the biggest gangster. If you play the violin you are always sure of a place in heaven." [3] As a child he played several instruments (violin, drums and accordion) in his father's small variety band. A child prodigy, in the early thirties he was not only performing violin concertos, he was already conducting orchestral concerts: first with the orchestra of La Scala in Milan, then in Trieste, Venice, Padua and Verona. He was originally Jewish. [4]

Orphaned at the age of four, [5] Maderna was adopted by a wealthy woman from Verona, Irma Manfredi, who saw that he received a solid musical education. He took private lessons in harmony and musical composition from Arrigo Pedrollo from 1935 until 1937 and studied composition with Alessandro Bustini at the Rome Conservatory from 1937 until 1940. [5]

After Rome he returned to Venice, where he attended the advanced course for composers (1940–42) organised by Gian Francesco Malipiero at the Benedetto Marcello Conservatory (his Concerto for Piano and Orchestra dates from this time). He also studied conducting with Antonio Guarnieri at the Accademia Chigiana in Siena (1941) and Hermann Scherchen in Venice (1948). [6] Through Scherchen Maderna discovered twelve-tone technique and the music of the Second Viennese School.

During the Second World War he took part in the partisan resistance. From 1948 to 1952 he taught music theory at the Venice Conservatory. During this period he collaborated with Malipiero on critical editions of Italian early music. Fellow composers he met at this time included Luigi Dallapiccola and, at the Internationale Ferienkurse für Neue Musik, Boulez, Messiaen, Cage, Pousseur, Nono and Stockhausen.

In 1950 Maderna started an international career as a conductor, first in Paris and Munich, then across Europe. In 1955 he founded the Studio di fonologia musicale di Radio Milano with Luciano Berio [7] and Incontri musicali, a series of concerts disseminating contemporary music in Italy.

With his later wife Beate Christina Koepnick, a young actress from Darmstadt, Maderna had three children. [1]

In 1957–58, at the invitation of Giorgio Federico Ghedini, he taught at the Milan Conservatory, and between 1960 and 1962 he lectured at Dartington International Summer School in England. From 1961 to 1966, Maderna and Pierre Boulez were the main directors of the International Kranichsteiner Kammerensemble in Darmstadt. Despite this heavy workload throughout these years Maderna found time to compose.

During the 1960s and '70s he spent much time in the United States, teaching and conducting. In 1971–72 he was appointed director of new music at Tanglewood. In 1972–73 he became the principal conductor of the Orchestra Sinfonica of RAI in Milan.

Maderna died of lung cancer in Darmstadt in 1973, at the age of 53. A number of composers wrote pieces in Maderna's memory, including Pierre Boulez ( Rituel in memoriam Bruno Maderna ) [8] [9] Earle Brown's Centering, dedicated to the memory of Maderna, ends with a short quotation from Maderna's First Oboe Concerto. [10]

Maderna composed much music in all genres: instrumental, chamber, concertos and electronic, as well as large amounts of incidental music (for theatre and radio) and transcriptions and editions of early music.

At the heart of Maderna's output are a number of concertos, including one for violin, one for two pianos, two for solo piano and several for flute and orchestra. He was particularly drawn to the oboe, composing three concertos in all: the first in 1962–63 followed by two more in 1967 and 1973. [2]

Other major orchestral works include Aura and Biogramma (both 1967) and Quadrivium, for four percussionists and four orchestral groups (premiered at the 1969 Royan Festival). Giuseppe Sinopoli recorded all three of these pieces with the North German Radio Symphony Orchestra in 1979. Maderna's Requiem, composed between 1944 and 1946, was rediscovered and performed in 2009; the American composer Virgil Thomson saw an unfinished version of the score in 1946 and praised it as a masterpiece. [11] [12] [13]

Bruno Maderna also produced scores for eight films and two documentaries. The last of these was for Giulio Questi's thriller La morte ha fatto l'uovo in 1968. [14]

Maderna was certainly also a prominent composer in genres such as electronic music, experimental music and avant-garde music. His work Musica su due dimensioni for flute, cymbals, and tape, which premiered at the Darmstadt Summer Courses for New Music in 1952, is one of the earliest examples of a composer combining acoustic and electronic sounds. [15] [16]

Recordings (as a conductor) 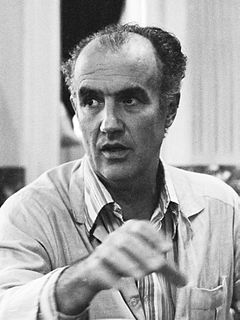 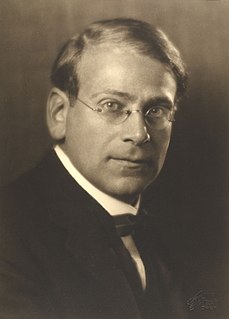 Différences is a composition by the Italian composer Luciano Berio for flute, clarinet, viola, cello, harp and magnetic tape, dating 1958–59. It was written for the Domaine musical concerts in Paris and first performed in March 1959, conducted by Pierre Boulez. 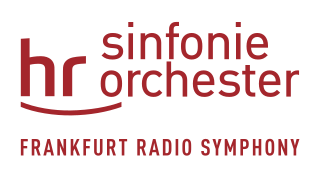 The Berlin Radio Symphony Orchestra is a German symphony orchestra based in Berlin. In Berlin, the orchestra gives concerts at the Konzerthaus Berlin and at the Berliner Philharmonie. The orchestra has also given concerts in other German cities such as Aschaffenburg, Essen, Halle, Oldenburg, and Wiesbaden. 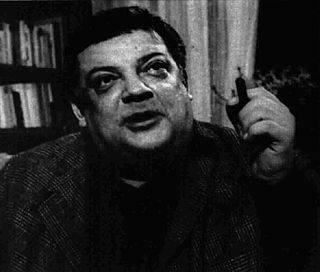 Satyricon is a chamber opera by Bruno Maderna with a libretto adapted by Ian Strasfogel and the composer from Petronius's Satyricon. It was written during Maderna's last illness in 1973 and premièred as part of the Holland Festival on 16 March 1973, in Scheveningen, Netherlands.

Sinfonia (Symphony) is a composition by the Italian composer Luciano Berio which was commissioned by the New York Philharmonic for its 125th anniversary. Composed in 1968–69 for orchestra and eight amplified voices, it incorporates musical quotations to represent an abstract and distorted history of culture. The eight voices are not incorporated classically but rather speak, whisper and shout excerpts from texts including Claude Lévi-Strauss' The Raw and the Cooked, Samuel Beckett's novel The Unnamable, instructions from the scores of Gustav Mahler and other writings.

Nones (1954) is a composition by Luciano Berio scored for orchestra. The piece is named for the poem, "Nones", by W. H. Auden, and was originally intended to be an oratorio, inspired by the poem, representing not only the Passion of Christ, but also the agony of modern man. The purely instrumental piece is predominantly punctual in texture and formally consists of an approximate arch created by "theme" and variations.

Luciano Berio was an Italian composer noted for his experimental work, and for his pioneering work in electronic music. His early work was influenced by Igor Stravinsky and experiments with serial and electronic techniques, while his later works explore indeterminacy and the use of spoken texts as the basic material for composition. 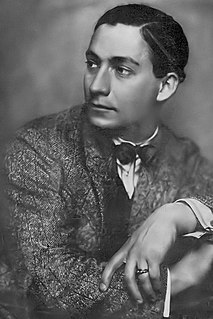 Frieder Weissmann was a German conductor and composer.

Rolf Kleinert was a German conductor.