Bruno Guido Camillo Tesch (22 April 1913 – 1 August 1933) was a German communist and member of the Young Communist League of Germany. Aged 20, he was convicted of murder and executed in connection with the Altona Bloody Sunday (Altonaer Blutsonntag) riot, a Sturmabteilung (SA) march on 17 July 1932 that turned violent and led to 18 people being shot and killed. [1] His conviction was overturned in November 1992.

Born in Kiel to an Italian mother, Tesch spent his childhood in Italy before moving to live with his stepfather in Hamburg in 1925, where he was an apprentice plumber. Finding himself unemployed after his apprenticeship was over, he entered the Freiwilliger Arbeitsdienst (FAD), or Volunteer Work Service. Politically radical, he joined the Socialist Worker Youth (Sozialistische Arbeiterjugend) in 1930, but soon switched to the Young Communist League of Germany (Kommunistischer Jugendverband Deutschlands).

On 17 July 1932, later known in German history as the Altonaer Blutsonntag , some Communists, with Tesch among them, tried to disrupt a march by the Nazis through a working-class area in Altona. Arguments and shoving escalated, culminating in gunfire that killed four SA members and 16 others, the latter group likely by uncontrolled police gunfire. Tesch, who was involved in the violence, was later alleged to have fired shots in the incident.

After the National Socialist German Workers Party seized power, the case was brought before the National Socialist Special Court ( Sondergerichte ) in Altona. Although the investigation turned up no solid proof of Tesch's guilt, and it could not be proved that Tesch had brought a weapon to the demonstration, he was nonetheless sentenced to death along with Walter Möller, Karl Wolff and August Lütgens. When Hermann Göring refused to commute the sentences of the four, [2] on 1 August 1933, in the courthouse courtyard – now home to Altona's Local Court – they were beheaded. These were the first officially declared executions in the Third Reich.

Arnold Zweig's 1947 book The Axe of Wandsbek was written about Altona Bloody Sunday and was subsequently filmed in East Germany in 1951 (and, again, in West Germany in 1981). [3] [4] In East Germany, a school in Klausdorf as well as a street in Wismar were named after Bruno Tesch. Despite political resistance, a former comprehensive school in Hamburg-Altona was named after Bruno Tesch.

All those sentenced to death had their convictions overturned on 13 November 1992 by the Hamburg State Court. Further sentences meted out by the Sondergericht in connection with the Altonaer Blutsonntag were reversed on 21 June 1996 and 29 June 1998.

The Reichstag fire was an arson attack on the Reichstag building, home of the German parliament in Berlin, on Monday 27 February 1933, precisely four weeks after Adolf Hitler was sworn in as Chancellor of Germany. Hitler's government stated that Marinus van der Lubbe, a Dutch council communist, was the culprit, and it attributed the fire to communist agitators in, but a German court decided later that year that Van der Lubbe had acted alone, as he had claimed. After the fire, the Reichstag Fire Decree was passed. The Nazi Party used the fire as a pretext to claim that communists were plotting against the German government, an event that is considered pivotal in the establishment of Nazi Germany.

Arnold Zweig was a German writer, pacifist and socialist. He is best known for his six-part cycle on World War I. 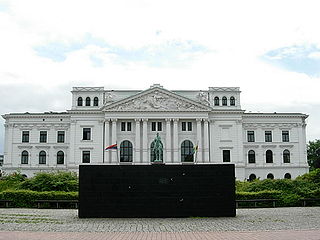 Altona is the westernmost urban borough (Bezirk) of the German city state of Hamburg, on the right bank of the Elbe river. From 1640 to 1864 Altona was under the administration of the Danish monarchy. Altona was an independent city until 1937. In 2016 the population was 270,263. 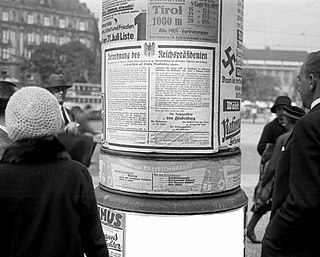 The Preußenschlag of 1932, also known in English as the coup in Prussia or the putsch in Prussia, was the takeover of the Free State of Prussia, the largest State of German Reich, by Chancellor Franz von Papen, using an emergency decree issued by President Paul von Hindenburg under Article 48 of the Weimar Constitution on July 20, 1932.

Bernhard Bästlein was a German Communist and resistance fighter against the Nazi régime. He was imprisoned very shortly after the Nazis seized power in 1933 and was imprisoned almost without interruption until his execution in 1944, by the Nazis. Nonetheless, he was one of the most important leaders of German Resistance.

Max Matern was a member of the Communist Party of Germany (KPD).

Anton Emil Hermann Saefkow was a German Communist and a resistance fighter against the National Socialist régime.

Rudolf Katz was a German politician and judge. He was Vice President of the Federal Constitutional Court of Germany.

Franz Jacob was a German Resistance fighter against the National Socialists and a Communist politician.

Ferdinand (Ferdi) Raeschke was a professional German boxer and, after his active boxing career, owned the beer tavern "Bei Ferry" at the corner of Seilerstrasse / Detlev-Bremer-Strasse inside the famous entertainment quarter of St. Pauli, Hamburg.

Altona Bloody Sunday was the name given to a violent confrontation between the Sturmabteilung (SA) and Schutzstaffel (SS), the police, and Communist Party (KPD) supporters on Sunday 17 July 1932 in Altona, now in Hamburg but then part of Schleswig-Holstein, a province of Prussia. The riots left 18 people dead.

Hans Christian Asmussen was a German Evangelical and Lutheran theologian.

Karl Friedrich Stellbrink was a German Lutheran pastor, and one of the Lübeck martyrs, guillotined for opposing the Nazi regime of Adolf Hitler.

Sport-Club Germania Hamburg - often referred to as SC Germania 1887 - was a sports club from the northern German metropolis Hamburg. It was created on 29 September 1887 through the merger of the track and field clubs Hohenfelder Sportclub and Wandsbek-Marienthaler Sportclub, which both were founded in 1884. Germania was six times winner of the association football Championship of Hamburg and in 1900 a founding member of the German football association. Germania merged on 2 June 1919 with Hamburger SV von 1888, Northern German champions of that year, to form today's Hamburger SV, six times German champions and European Cup of Champions' winner of 1983. Hamburger SV carries the foundation date of Germania as its foundation date and uses the colours of Germania in its badge.

Karl Weinbacher was a German manager and war criminal who was executed after conviction by a British war tribunal.

Robert Neddermeyer was a political activist who became a Communist politician.

August Lütgens was a communist activist who spent the 1920s exiled in the Soviet Union. On returning to Germany in 1930 or 1931 he became a leading member of the paramilitary "Red Front-Fighters" in the politically volatile Hamburg region. In 1932 he was involved in the Altona Bloody Sunday street battle and, following the National Socialist power grab at the start of 1933, he became a victim of "Nazi justice". On 1 August 1933 August Lütgens was executed: four men were convicted and executed at the same time, but Lütgens was identified at the time as the leading figure among them, and of the four cases, it is the one involving Lütgens that has received the most coverage subsequently.