The Privy Council or Secret Council (Dutch : Geheime Raad, French : Conseil Privé) in Brussels was one of the three "collateral councils" (along with the Council of Finance and Council of State) that together formed the highest government institutions of the Habsburg Netherlands. [1] It was particularly charged with legal and administrative questions. [2]

The Council was founded on 1 October 1531 by Emperor Charles V. [3] He prescribed a president, eight councillors, and a secretary.

Philip V of Spain abolished the council in 1702, but it was later restored by the archduchess-governess Maria Christina, Duchess of Teschen and finally abolished by the Brabant Revolution.

Jean Grusset dict Richardot, knight was a statesman and diplomat from the Franche-Comté, who held high political office during the Dutch Revolt and played an important role in restoring Habsburg rule in the Southern Netherlands. 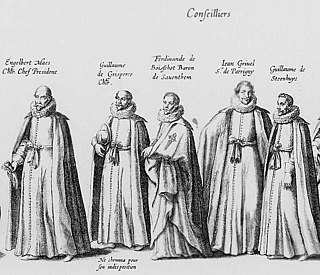 Events of 1531 in the Habsburg Netherlands and Prince-bishopric of Liège.