Merrick played with the Shamones, a Ramones tribute band that toured the UK for five years, until splitting in August 2015. [2]

Stretch Arm Strong is a hardcore punk band from Columbia, South Carolina, and the flagship band for We Put Out Records. They were primarily active from 1992 to 2005. Several of the band members are outspoken Christians, but they prefer not to be classified as a Christian band in some cases. Vocalist Chris McLane appears on Zao's The Lesser Lights of Heaven DVD. In 2020, the band was announced to perform at Furnace Fest 2020.

Belinda Jane Emmett was an Australian actress and singer. She was best known for her roles in the TV drama series Home and Away and All Saints as well as comedy Hey Dad..!. She was married to Australian television host, comedian and media personality Rove McManus. 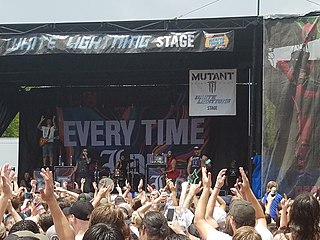 Every Time I Die is an American metalcore band from Buffalo, New York, formed in 1998. They have garnered acclaim for their energetic and intense live shows. They announced in July 2008 that they had left their label Ferret Music and signed with Epitaph Records instead. Their eighth and latest studio album Low Teens was released through Epitaph in September 2016.

Gutter Phenomenon is the third studio album by American metalcore band Every Time I Die.

Hammerbox was an American alternative rock band from Seattle, Washington, United States. The band formed around 1990 and disbanded in 1994 when lead singer Carrie Akre left the band to form Goodness.

The Dakotas is a group of British musicians, which initially convened as a backing band in Manchester, England. However, they are most closely associated with the singer Billy J. Kramer, a Liverpudlian who was the lead vocalist for the group during the 1960s. In the U.S., they are regarded as part of the British Invasion.

Bryn is a Welsh word meaning hill. It may also refer to:

Josh Newton is an American musician, perhaps best known for his tenure as the bassist in Every Time I Die. He is also the singer and guitarist of The Great Fire of Sixteen Sixty Six. Newton was a member of the following rock bands: Shiner, From Autumn To Ashes, Biology, Glazed Baby, Season to Risk, Iron Rite Mangle, Creamy, Shots Fired, The Damned Things, and Reggie and the Full Effect. Newton also did a tour playing rhythm guitar for Unsane in 1994 with Today Is The Day. 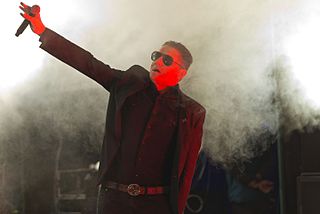 Douglas John McCarthy is the vocalist of the English EBM band Nitzer Ebb.

This article is about the particular significance of the year 2015 to Wales and its people.

Donald McCarthy, was a British entrepreneur and philanthropist. He was most known for having been the chairman of House of Fraser.