Divecha was a right-arm bowler who bowled fast-medium or off-breaks, and a useful batsman.

In 1942 while studying in Wilson College he was arrested in connection with the Quit India movement. He was not charged, and he took no active part in politics after that. His father V.J. Divecha was a club cricketer, President of the Bombay Cricket Association and the Vice President of the Board of Control for Cricket in India.

While studying at Worcester College, Oxford, Divecha played four seasons of cricket for Oxford University and earned blues in 1950 and 1951. He appeared for Northamptonshire against the Australians in 1948 and played Minor Counties cricket for Oxfordshire.

Divecha's career in Indian domestic cricket was far shorter than that in England. He played one Ranji Trophy match for Bombay in 1951–52, one for Madhya Pradesh in 1954–55 and four for Saurashtra in 1962–63. In these six matches he took 22 wickets at 27.50. After his early retirement from cricket, he became a prominent golf player.

Divecha took an M.A. from Oxford. He was an executive with Burmah Shell and Mahindra & Mahindra.

His death came after a prolonged illness. He suffered from Alzheimer's disease.

Vijay Singh Madhavji Merchantpronunciation (help·info), real name Vijay Madhav Thackersey was an Indian cricketer. A right-hand batter and occasional right-arm medium pace bowler, Merchant played first-class cricket for Bombay cricket team as well as 10 Test matches for India between 1929 and 1951. Behind his limited Test appearances, he dominated Indian domestic cricket – his batting average of 71.64 is the second highest first-class average in history, behind only that of Don Bradman. He is regarded as the founder of the Bombay School of Batsmanship, that placed more importance on right technique, steely temperament, and conservative approach rather than free flow of the bat, a tradition broken and remoulded only after the arrival of Sachin Tendulkar.

Gulabrai Sipahimalani "Ram" Ramchandpronunciation (help·info) was an Indian cricketer who played for the national team in 33 Test matches between 1952 and 1960. In his only series as captain, he led India to its first win against Australia. According to Wisden Asia, he was one of the first cricketers to have endorsed commercial brands. 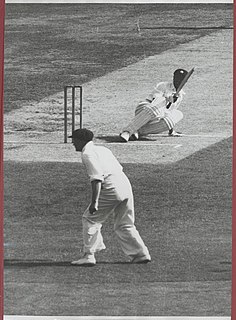 Vijay Laxman Manjrekarpronunciation (help·info) was an Indian cricketer who played 55 Tests. He represented several teams in his first-class career. A small man, he was a fine cutter and hooker of the ball. He is the father of Sanjay Manjrekar.

Rameshchandra Gangaram "Bapu" Nadkarnipronunciation (help·info) was an Indian cricketer, mainly known for being an economical bowler. The chances of scoring against him was either nil, or negligible.

Leonard Joseph Johnson was an Australian cricketer who played in one Test in 1948.

Sadashiv Ganpatrao "Sadu" Shindepronunciation (help·info) was an Indian cricketer who played in seven Tests from 1946 to 1952. His daughter, Pratibha Pawar, is the wife of politician Sharad Pawar.

The Kanga Cricket League is a cricket competition in Mumbai, India, inaugurated in 1948. It is named after Hormasji Kanga, who played 43 First class cricket matches as an all-rounder, and was also a selector for the India national cricket team 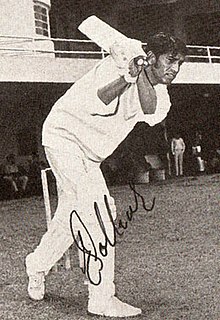