A 6'8" center from the University of Louisville, Olsen was selected by the Cincinnati Royals in the second round of the 1962 NBA draft. He played seven seasons in the NBA with the Royals, San Francisco Warriors, Seattle SuperSonics, Boston Celtics, and Detroit Pistons, averaging 4.3 points and 3.0 rebounds per game. He spent the 1969–70 season with the Kentucky Colonels of the American Basketball Association. [1] 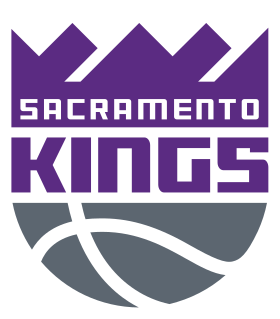 The Sacramento Kings are an American professional basketball team based in Sacramento, California. The Kings compete in the National Basketball Association (NBA) as a member of the Western Conference Pacific Division. The Kings are oldest team in the NBA, and the first and only team in the major professional North American sports leagues located in Sacramento. The team plays its home games at the Golden 1 Center. Their best seasons to date in the city were in the early 2000s, including a very successful 2001–02 season when they had the best record in the NBA at 61–21.

Harry Peter "Bud" Grant Jr. is a former head coach and player of American football, Canadian football, and a former player in the National Basketball Association (NBA). Grant served as the head coach of the Minnesota Vikings of the National Football League (NFL) for 18 seasons; he was the team's second (1967–83) and fourth (1985) head coach, leading them to four Super Bowl appearances, 11 division titles, one league championship and three National Football Conference championships. Before coaching the Vikings, he was the head coach of the Winnipeg Blue Bombers of the Canadian Football League (CFL) for ten seasons, winning the Grey Cup four times. Grant is the most successful coach in Vikings history, and the fifth most successful professional football coach overall with a combined 286 wins in the NFL and CFL. Grant was elected to the Canadian Football Hall of Fame in 1983 and to the Pro Football Hall of Fame in 1994. He was the first coach to guide teams to the Grey Cup and the Super Bowl, the only other being Marv Levy.

Oscar Palmer Robertson, nicknamed "the Big O", is an American former professional basketball player who played for the Cincinnati Royals and Milwaukee Bucks in the National Basketball Association (NBA). Robertson played point guard and was a 12-time All-Star, 11-time member of the All-NBA Team, and one-time winner of the MVP award in 14 seasons. In 1962, he became the first player in NBA history to average a triple-double for a season. In the 1970–71 NBA season, he was a key player on the team that brought the Bucks their first NBA title. His playing career, especially during high school and college, was plagued by racism.

Smoothie King Center is a multi-purpose indoor arena in New Orleans, Louisiana. It is located in the city's Central Business District, adjacent to Caesars Superdome. The arena opened in 1999 as New Orleans Arena and has been home to the New Orleans Pelicans of the National Basketball Association (NBA) since 2002. The New Orleans VooDoo of the Arena Football League played their home games in the arena from 2004 until the team disbanded in 2008. The VooDoo resumed play at the arena in March 2011, until after the 2015 AFL season when the franchise folded.

Royal Terence Ivey is an American professional basketball coach and former player who is an assistant coach for the Brooklyn Nets of the National Basketball Association (NBA). He is also the head coach of the South Sudanese national basketball team. He played college basketball for the Texas Longhorns before spending 10 years in the NBA. 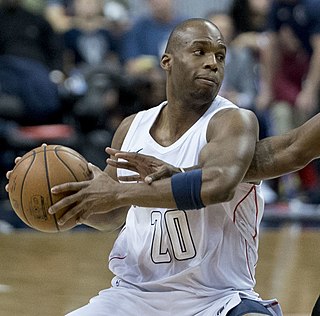 Orestes Jodie Meeks II is an American professional basketball coach and former player who is an assistant coach for the Birmingham Squadron of the NBA G League. He played college basketball for the University of Kentucky. On January 13, 2009, he gained national recognition by breaking the Kentucky single-game scoring record with 54 points in a nationally televised game on ESPN against Tennessee. In the same game, he broke the university's single-game three-point record by making 10 three-pointers. Meeks won the 2019 NBA championship as a member of the Toronto Raptors. 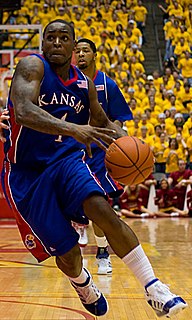 Sherron Marlon Collins is an American former professional basketball player who last played for the Kansas City Tornados of the NAPB (NAPB). He formerly played for the Charlotte Bobcats of the National Basketball Association (NBA). He has also played for the Texas Legends and Maine Red Claws of the NBA D-League and Hacettepe Üniversitesi in the Turkish Basketball League. As an All-American member of the Kansas Jayhawks men's basketball team, he earned a national championship in the 2008 NCAA Men's Division I Basketball Tournament, three Big 12 men's basketball tournament championships, and four consecutive Big 12 Conference regular season championships. He was regarded as one of the leaders of the team and was its captain during his senior year.

Robert William Harrison is an American retired professional basketball player. A 6'1" guard from the University of Michigan, Harrison played nine seasons (1949–1958) in the National Basketball Association as a member of the Minneapolis Lakers, Milwaukee Hawks, St. Louis Hawks, and Syracuse Nationals. He averaged 7.2 points per game in his professional career and appeared in the 1956 NBA All-Star Game. Harrison coached the Syracuse Centenials during the 1976–77 Eastern Basketball Association season.

Conrad William Dierking was an American professional basketball player from 1958 to 1971.

The 1963–64 season was the Royals 16th season in the NBA and its seventh in Cincinnati. The Royals finished in 2nd place with a 55–25 record, the second best record in the NBA. The team's outstanding roster included Oscar Robertson, Jerry Lucas, Team Captain Wayne Embry, Jack Twyman, Bucky Bockhorn, Bob Boozer, Tom Hawkins, Adrian Smith, Bud Olsen, Larry Staverman and coach Jack McMahon . The team is noteworthy for having both the NBA MVP in Robertson and the NBA Rookie of the Year in Lucas, a rare occurrence in NBA history. The team played most of their home games at Cincinnati Gardens arena, but also hosted home games that season in Dayton, Lima, Columbus at Saint John arena and Cleveland at Cleveland Arena. In the playoffs the Royals defeated the Philadelphia 76ers in a 5-game series, but both Lucas and Olsen would be lost to injury. In the Eastern Conference Final, the Royals were eliminated by the Boston Celtics, who triumphed in 5 games.

The 1962–63 Cincinnati Royals season was the team's 15th season in the National Basketball Association (NBA) and its sixth in Cincinnati. The Royals were shifted from the Western Division into the Eastern Division before the start of the season because the Philadelphia Warriors had relocated to San Francisco. In their first season in the Eastern Division, the Royals posted a 42–38 record and finished in 3rd place. The season saw the Royals challenged by a rival league, the American Basketball League run by Abe Saperstein, like few NBA teams ever have been. Larry Staverman and Win Wilfong had left the team for the new league. #1 draft picks Larry Siegfried and Jerry Lucas were both also signed away by the ABL. These key losses would later greatly affect the team's playoffs result. Lucas was particularly missed by Cincinnati fans. Oscar Robertson nonetheless led a balanced and solid Royals five that year, supported by Wayne Embry, Jack Twyman, Bob Boozer and Bucky Bockhorn. Draft pick Adrian Smith had arrived and joined Tom Hawkins and Hub Reed at the head of the bench. Robertson posted 28.3 points per game, and his league-leading assists total was twice that of all but one other NBA player. He sank the second-most free throws in the league, and was a strong third on the Royals in rebounds. 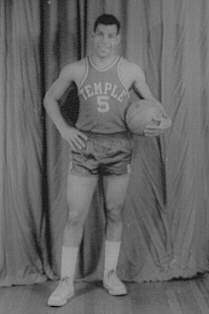 The 1968 NBA Expansion Draft was the fourth expansion draft of the National Basketball Association (NBA). The draft was held on May 6, 1968, so that the newly founded Milwaukee Bucks and Phoenix Suns could acquire players for the upcoming 1968–69 season. Milwaukee and Phoenix had been awarded the expansion teams on January 22, 1968. In an NBA expansion draft, new NBA teams are allowed to acquire players from the previously established teams in the league. Not all players on a given team are available during an expansion draft, since each team can protect a certain number of players from being selected. In this draft, each of the twelve other NBA teams had protected seven players from their roster. After each round, where each the Suns and the Bucks had selected one player, the existing teams added another player to their protected list. The draft continued until both teams had selected eighteen unprotected players each, while the existing teams had lost three players each.

The 1967 NBA Expansion Draft was the third expansion draft of the National Basketball Association (NBA). The draft was held on May 1, 1967, so that the newly founded San Diego Rockets and Seattle SuperSonics could acquire players for the upcoming 1967–68 season. Seattle and San Diego had been awarded the expansion teams on December 20, 1966, and January 11, 1967, respectively. The Rockets moved to Houston, Texas, in 1971 and are currently known as the Houston Rockets. The SuperSonics moved to Oklahoma City, in 2008 and are currently known as the Oklahoma City Thunder. In an NBA expansion draft, new NBA teams are allowed to acquire players from the previously established teams in the league. Not all players on a given team are available during an expansion draft, since each team can protect a certain number of players from being selected. The Rockets and the Sonics selected fifteen unprotected players each, while the ten other NBA teams lost three players each.

Tristan Trevor James Thompson is a Canadian-American professional basketball player who is currently a free agent. He won the 2016 NBA Finals with the Cleveland Cavaliers and has also played in the NBA for the Boston Celtics, Sacramento Kings, and Indiana Pacers.

Michael Vincent Budenholzer is an American professional basketball coach who is the head coach of the Milwaukee Bucks of the National Basketball Association (NBA). Before joining the Bucks, he spent five seasons as head coach of the Atlanta Hawks and 17 seasons with the San Antonio Spurs, serving as an alternate video coordinator for the first two seasons and then as an assistant coach behind head coach Gregg Popovich. In 2021, Budenholzer coached the Bucks to their first NBA championship since 1971. 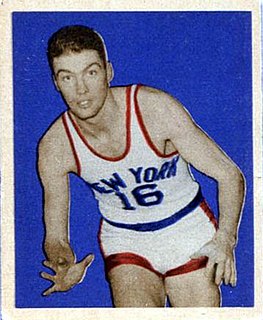 John Shove "Bud" Palmer was an American professional basketball player. He was a member of the New York Knicks during the team's first three seasons in the Basketball Association of America, and was the leading scorer in the team's inaugural 1946–47 season. Palmer is considered to be one of the inventors of the jump shot.

The following are the basketball events of the year 2018 throughout the world.