BuggedPlanet.info is a Wiki created in 2011 [1] by Andy Müller-Maguhn, former spokesman of the Chaos Computer Club, that tries to list and track down the activities of the surveillance industry in the fields of "Lawful interception", Signals intelligence (SIGINT), Communications intelligence (COMINT) as well as tactical and strategical measures used to intercept communications and the vendors and governmental and private operators of this technology. [2] [3] [4] [5] [6]

The site maintains a list of vendors of cyberweapons and surveillance technologies as well as a "country knowledgebase" that aims to accumulate country-specific news, activities and vendors on the topic. A special focus is placed on vendors that sell such technologies to undemocratic countries and related lobbying efforts. [2]

In December 2011 Privacy International and WikiLeaks collaborated with BuggedPlanet when they released documents collected from a number of surveillance trade shows and conferences included brochures, catalogues, technical specifications, contracts and pricelists for the products of around 160 companies. [7] [8] 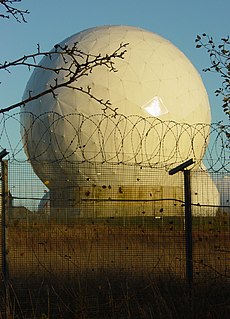 ECHELON, originally a secret government code name, is a surveillance program operated by the United States with the aid of four other signatory states to the UKUSA Security Agreement: Australia, Canada, New Zealand, and the United Kingdom, also known as the Five Eyes.

Mass surveillance is the intricate surveillance of an entire or a substantial fraction of a population in order to monitor that group of citizens. The surveillance is often carried out by local and federal governments or governmental organisations, such as organizations like the NSA and the FBI, but it may also be carried out by corporations. Depending on each nation's laws and judicial systems, the legality of and the permission required to engage in mass surveillance varies. It is the single most indicative distinguishing trait of totalitarian regimes. It is also often distinguished from targeted surveillance.

The Government Communications Security Bureau (GCSB) is the public-service department of New Zealand charged with promoting New Zealand's national security by collecting and analysing information of an intelligence nature.

The Five Eyes (FVEY) is an anglophone intelligence alliance comprising Australia, Canada, New Zealand, the United Kingdom and the United States. These countries are parties to the multilateral UKUSA Agreement, a treaty for joint cooperation in signals intelligence.

Verint Systems is a Melville, New York-based analytics company which was founded in 2002. The company sells software and hardware products for customer engagement management, security, surveillance, and business intelligence. Their products are designed to assist clients in data analysis, specifically large data sets.

The Communications and Information Services Corps (CIS) – formerly the Army Corps of Signals – is one of the combat support corps of the Irish Defence Forces, the military of Ireland. It is responsible for the installation, maintenance and operation of communications and information systems for the command, control and administration of the Defence Forces, and the facilitation of accurate, real-time sharing of intelligence between the Army, Naval Service and Air Corps branches at home and overseas.

Signals intelligence by alliances nations and industries, many organizations, national or not, are responsible for communications security as well as SIGINT; the organization makes codes and ciphers that it hopes opponents cannot break. There is a synergy between the two components; there is a saying among cryptologists that no one is qualified to create a cipher unless they have successfully cryptanalyzed a cipher of equivalent complexity. 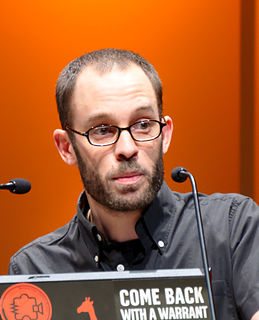 Daniel Domscheit-Berg, previously known under the pseudonym Daniel Schmitt, is a German technology activist. He is best known as the author of Inside WikiLeaks: My Time with Julian Assange at the World's Most Dangerous Website (2011).

The use of electronic surveillance by the United Kingdom grew from the development of signal intelligence and pioneering code breaking during World War II. In the post-war period, the Government Communications Headquarters (GCHQ) was formed and participated in programmes such as the Five Eyes collaboration of English-speaking nations. This focused on intercepting electronic communications, with substantial increases in surveillance capabilities over time. A series of media reports in 2013 revealed bulk collection and surveillance capabilities, including collection and sharing collaborations between GCHQ and the United States' National Security Agency. These were commonly described by the media and civil liberties groups as mass surveillance. Similar capabilities exist in other western European countries, such as France. 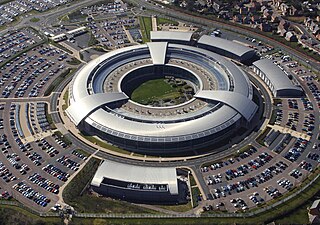 Ongoing news reports in the international media have revealed operational details about the United States National Security Agency (NSA) and its international partners' global surveillance of both foreign nationals and U.S. citizens. The reports mostly emanate from a cache of top secret documents leaked by ex-NSA contractor Edward Snowden, which he obtained whilst working for Booz Allen Hamilton, one of the largest contractors for defense and intelligence in the United States. In addition to a trove of U.S. federal documents, Snowden's cache reportedly contains thousands of Australian, British and Canadian intelligence files that he had accessed via the exclusive "Five Eyes" network. In June 2013, the first of Snowden's documents were published simultaneously by The Washington Post and The Guardian, attracting considerable public attention. The disclosure continued throughout 2013, and a small portion of the estimated full cache of documents was later published by other media outlets worldwide, most notably The New York Times, the Canadian Broadcasting Corporation, the Australian Broadcasting Corporation, Der Spiegel (Germany), O Globo (Brazil), Le Monde (France), L'espresso (Italy), NRC Handelsblad, Dagbladet (Norway), El País (Spain), and Sveriges Television (Sweden).

Global mass surveillance refers to the mass surveillance of entire populations across national borders. Its roots can be traced back to the middle of the 20th century when the UKUSA Agreement was jointly enacted by the United Kingdom and the United States, which later expanded to Canada, Australia, and New Zealand to create the present Five Eyes alliance. The alliance developed cooperation arrangements with several "third-party" nations. Eventually, this resulted in the establishment of a global surveillance network, code-named "ECHELON" (1971).

The Joint Threat Research Intelligence Group (JTRIG) is a unit of the Government Communications Headquarters (GCHQ), the British intelligence agency. The existence of JTRIG was revealed as part of the global surveillance disclosures in documents leaked by the former National Security Agency contractor Edward Snowden. 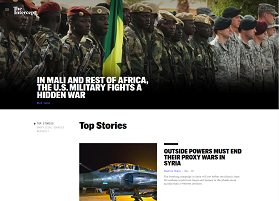 The Intercept is an online news publication dedicated to what it describes as "adversarial journalism", with the central aim of holding "the most powerful governmental and corporate factions accountable". It is supported financially by First Look Media, owned by Pierre Omidyar. Its editors are Betsy Reed, Glenn Greenwald, and Jeremy Scahill. Former editor Laura Poitras left the publication to work on non-fiction films. The Intercept also publishes two podcasts: Intercepted hosted by Scahill and Deconstructed hosted by Mehdi Hasan. 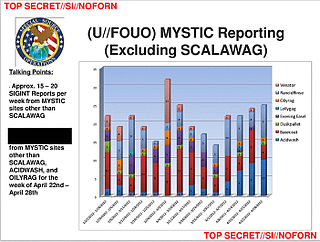 MYSTIC is a former secret program used since 2009 by the US National Security Agency (NSA) to collect the metadata as well as the content of phone calls from several countries. The program was first revealed in March 2014, based upon documents leaked by Edward Snowden.

HackingTeam is a Milan-based information technology company that sells offensive intrusion and surveillance capabilities to governments, law enforcement agencies and corporations. Its "Remote Control Systems" enable governments and corporations to monitor the communications of internet users, decipher their encrypted files and emails, record Skype and other Voice over IP communications, and remotely activate microphones and camera on target computers. The company has been criticized for providing these capabilities to governments with poor human rights records, though HackingTeam states that they have the ability to disable their software if it is used unethically. The Italian government has restricted their licence to do business with countries outside Europe.

The cyber-arms industry are the markets and associated events surrounding the sale of software exploits, zero-days, cyberweaponry, surveillance technologies and related tools. The term may extend to both grey and black markets online and offline.