Last updated June 02, 2021
Largest city of Burundi
This article is about the city Bujumbura. For provinces with this name, see Bujumbura Province.
Place in Bujumbura Mairie Province, Burundi

Bujumbura (French pronunciation: ​ [buʒumbuʁa] ), formerly Usumbura, is the largest city and main port of Burundi. It ships most of the country's chief export, coffee, as well as cotton and tin ore. In late December 2018, Burundian president Pierre Nkurunziza announced that he would follow through on a 2007 promise to return Gitega its former political capital status, with Bujumbura remaining as economical capital and center of commerce. A vote in the Parliament of Burundi made the change official on 16 January 2019, with all branches of government expected to move to Gitega within three years. [3]

Bujumbura grew from a small village after it became a military post in German East Africa in 1889. After World War I it was made the administrative center of the Belgian League of Nations mandate of Ruanda-Urundi. The name was changed from Usumbura to Bujumbura when Burundi became independent in 1962. [4] Since independence, Bujumbura has been the scene of frequent fighting between the country's two main ethnic groups, with Hutu militias opposing the Tutsi-dominated Burundi army.

Bujumbura is on the north-eastern shore of Lake Tanganyika, the second deepest lake in the world after Lake Baikal. The city also lies at the mouth of the Ruzizi River and two smaller rivers (Muha and Ntahangwa).

Bujumbura features a tropical savanna climate (Köppen: Aw) [5] with distinct wet and dry seasons. Its wet season is from October to April, while the dry season covers the remaining five months. Despite being located close to the equator, Bujumbura is not nearly as warm as one might expect, due to its altitude. Average temperatures are constant throughout the course of the year with the high temperature at around 29 °C (84 °F) and the low temperature at around 19 °C (66 °F).

Bujumbura is governed by a community council and community administrator. It is further divided into 3 communes , or neighborhoods, each with its own council and council leader. [8]

Each of the 3 current communes were created from the 13 former communes (currently sub-communes), due to a 2014 reorganization, which in turn are further sub-divided into villages or zones: [9]

At dawn of 27 January 2013 a serious fire ravaged Bujumbura's central market. [10] Due to poor emergency response, the fire lasted for hours, resulting in a serious blow to local exchanges. Hundreds of vendors, local and foreign, lost their goods to the fire and the reported looting. [11] While Burundi's emergency services were unable to extinguish the blaze on their own, neighbouring Rwanda sent helicopters to assist in the emergency response. [12]

Bujumbura is the location for the city's multisport Intwari stadium. Mainly used for football games, it is the country's largest stadium with 22,000 seats.

The city is also home to multiple basketball and tennis courts, as well as a multitude of indoor and outdoor swimming pools.

The University of Burundi is in Bujumbura, as are Hope Africa University and Université du Lac Tanganyika.

The Bujumbura International Airport is situated on the outskirts of the city.

Bujumbura's taxis are abundant all over the city, and are considered the safest form of transportation. There are taxi-motos (motorcycle taxis) and taxis-vélos (bicycle taxis), although they are only available in certain parts of the city.

For long distance travel, locals prefer to take the many Hiace full-size vans, which travel regularly across Burundi. Bujumbura's main bus terminal is located by the Central Market.

Bujumbura is also home to many clinics and the province's main hospitals: the Prince Regent Charles Hospital, the Roi Khaled Hospital, and the Military Hospital.

Among the places of worship are predominantly Christian churches and temples: Roman Catholic Archdiocese of Bujumbura (Catholic Church), Province of the Anglican Church of Burundi (Anglican Communion), Union of Baptist Churches in Burundi (Baptist World Alliance), and Assemblies of God. [16] There are also Muslim mosques.

Bujumbura's main attractions consist of its many museums, parks and monuments. Museums in the city include the Burundi Museum of Life and the Burundi Geological Museum. Other nearby attractions include the Rusizi National Park, the Livingstone-Stanley Monument at Mugere (where David Livingstone and Henry Morton Stanley visited 14 days after their first historic meeting at Ujiji in Tanzania), the presidential palace and the source of the southernmost tributary of the Nile, described locally as the source of the Nile.

Bujumbura was also home of the independent weekly radio programme Imagine Burundi, the country's first locally produced English-language programme that focused on stories about life in the region. The show was broadcast from September 2010 to August 2013, and recordings are archived on the show's website at imagineburundi.com. [17]

Bujumbura is twinned with: 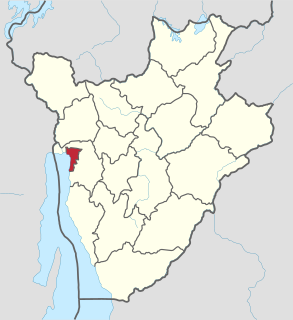 Bujumbura Mairie Province is one of the eighteen provinces of Burundi. It consists entirely of the city of Bujumbura, Burundi's former capital.

Gitega, formerly Kitega, is the capital of Burundi. Located in the centre of the country, in the Burundian central plateau roughly 62 kilometres (39 mi) east of Bujumbura, Gitega was the seat of the Kingdom of Burundi until its abolition in 1966. In late December 2018, Burundian president Pierre Nkurunziza announced that he would follow on a 2007 promise to return Gitega its former political capital status, with Bujumbura remaining as economic capital and centre of commerce. A vote in the Parliament of Burundi made the change official on 16 January 2019, with all branches of government expected to move in over three years.

Antsirabe is the third largest city in Madagascar and the capital of the Vakinankaratra region, with a population of 265,018 in 2014. In Madagascar, Antsirabe is known for its relatively cool climate, its industry and the high concentration of pulled rickshaws or pousse-pousse. It attracts around 30,000 tourists a year

The Communes of Burundi are divided into 2,639 collines. Colline means "hill" in French, one of the three official languages of the country. The collines are listed below, by commune:

Gisozi, also Kisozi is a settlement in central Burundi and capital of the commune of the same name. It is located in Mwaro Province, to the southeast of Bujumbura and southwest of Gitega.

Following independence, the World Health Organization (WHO) assisted in the organization of public health services and the training of sanitarians and public health nurses for Burundi. Students from Burundi received medical training at universities in France and in the Democratic Republic of the Congo. WHO coordinated all public health programs and helped in campaigns against smallpox, tuberculosis, and malaria.

Energy in Burundi is a growing industry with tremendous potential.

Interbank Burundi, often called Interbank, is a commercial bank in Burundi. It is licensed by the Bank of the Republic of Burundi, the national banking regulator.

The commune Itaba is one of 11 municipalities in the province of Gitega, Burundi. It is surrounded in the north by the town Gitega, to the south by Rutana Province, to the west by the municipalities Bukirasazi and Makebuko, to the east by Rutana and Ruyigi provinces. It covers an area of 170 square kilometres (66 sq mi), equal tp 8.6% of the entire province of Gitega and 0.6% of the whole country.

Antsirabe I is a district in, and capital of, Vakinankaratra Region, Madagascar. The borders of the district are identical to those of the city and urban commune of Antsirabe.

The Baháʼí Faith in Burundi begins after 1916 with a mention by ʻAbdu'l-Bahá, then head of the religion, that Baháʼís should take the religion to the regions of Africa. The first specific mention of Burundi (Urundi) was in May 1953 suggesting the expanding community of the Baháʼí Faith in Uganda look at sending pioneers to neighboring areas like Burundi(Urundi) as part of a specific plan of action. The first settlers of the religion arrived in the region by June. By 1963 there were three Baháʼí Local Spiritual Assemblies in Burundi-Ruanda. Through succeeding organizations of the countries in the region, the National Spiritual Assembly of Burundi was first formed in 1969 but was successively dissolved and reformed a number of times - most recently reforming in 2011. Even though the religion was banned for a time, and the country torn by wars, the religion grew so that in 2005 the Association of Religion Data Archives estimated just about 6,800 Baháʼís in Burundi.

Brarudi S.A., also known by its French name Brasseries et Limonaderies du Burundi, is the largest brewer and soft beverage company in the Republic of Burundi.

FinBank Burundi, also known as Finbank, is a commercial bank in Burundi, licensed by the Bank of the Republic of Burundi, the central bank and national banking regulator. The bank, established in 2002, was between 2008 and 2014 a subsidiary and a component of the Access Bank Group.

Holy Spirit Lycée is a public, Catholic secondary education institution run by the Rwanda Burundi Region of the Society of Jesus in Gihosha, Bujumbura, Burundi. It covers ages 11 through 18 and has about 920 students. The Lycée is managed by the Society of Jesus. It has ranked first in the country's national exams.

The following is a timeline of the history of the city of Bujumbura, Burundi.

See also: Bibliography of the history of Bujumbura