The Bukovec Mountains (Slovak : Bukovské vrchy; Hungarian : Ungi-határhegység) is a flysch mountain range in north-eastern Slovakia, part of the Eastern Beskids of the Outer Eastern Carpathians.

It is located in the Prešov Region near the borders with Poland (Bieszczady Mountains) and Ukraine, and adjacent to the Laborec Highlands. The highest mountain is Kremenec  [ de; sk; pl ] at 1,221 m AMSL.

Original flora and fauna was preserved because of the area's remoteness. The mountain range is covered with beech forests. The area is protected by Poloniny National Park. Localities Havešová, Stužica and Rožok are listed on the UNESCO World Heritage Site list. 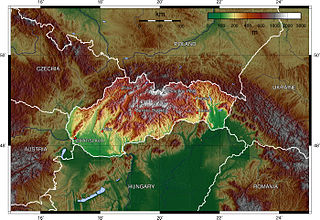 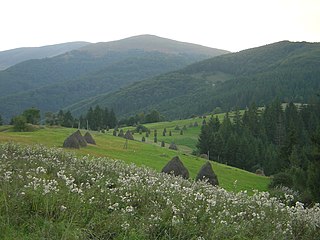 The Beskids or Beskid Mountains is a traditional name for a series of mountain ranges in the Carpathians, stretching from the Czech Republic in the west along the border of Poland with Slovakia up to Ukraine in the east.

Lesko County is a unit of territorial administration and local government (powiat) in Subcarpathian Voivodeship, south-eastern Poland, on the Slovak border. It was created in 2002 out of five gminas which previously made up the western part of Bieszczady County. Its administrative seat and only town is Lesko, which lies 67 kilometres (42 mi) south of the regional capital Rzeszów. 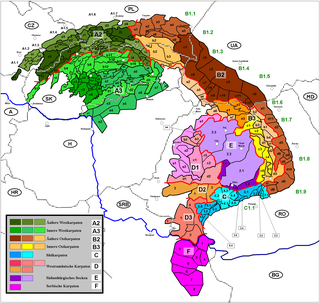 Myjava District is a district in the Trenčín Region of western Slovakia. It is located in the area of the Myjava Hills. Myjava district belongs to the smaller districts in Slovakia and the population density is slightly under the country average. In the north it borders with the Czech Republic. Myjava district was established in 1923 and in its present borders exists from 1996.

The North Hungarian Mountains is the northern, mountainous part of Hungary. It forms a geographical unity with the Mátra-Slanec Area, the adjacent parts of Slovakia. It is a separate geomorphological area within the Western Carpathians. The mountains run along in Northeast Hungary, and along with the eastern parts of the Hungarian-Slovak border in broadband from the Danube Bend to the town of Prešov.

Bukovec is a village and municipality in Myjava District in the Trenčín Region of north-western Slovakia.

Bukovec is a village and municipality in Košice-okolie District in the Košice Region of eastern Slovakia. 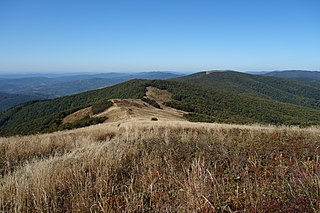 Wetlina is a village with a population of 307 located in south-eastern Poland in the Subcarpathian Voivodeship, near the border with Slovakia. It is near the entrance to Bieszczady National Park and is situated along the Wetlinka river. 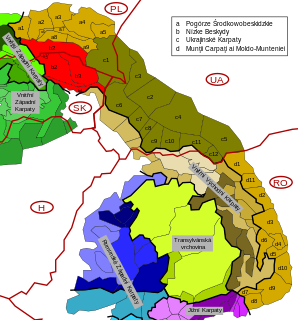 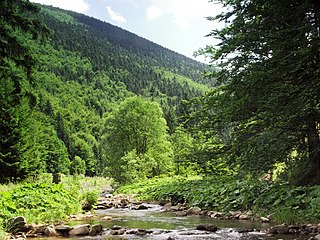 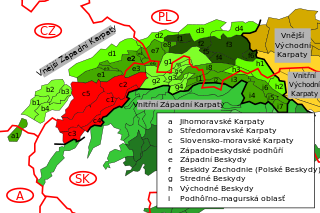 The Slovak-Moravian Carpathians are the mountain ranges along the border of the Czech Republic and Slovakia. Before the Treaty of Trianon in 1920 it was called Hungarian-Moravian Border Mountain.

The Podhale-Magura Area — is a geomorfologic region of mountain ranges in northern Slovakia and southern Poland, belonging to the Outer Western Carpathians within the Carpathian Mountains system. 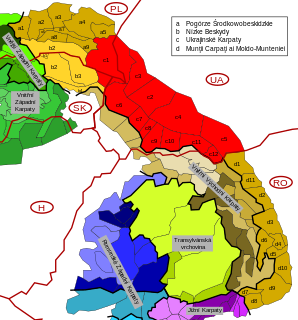