Burj Al Fattan is a proposed supertall skyscraper for construction in Dubai Marina. The tower would be built on the site of a former hotel. Burj Al Fattan is projected to have 97 floors and a height of 463 m. [1]

The Burj Al Arab is a luxury hotel located in Dubai, United Arab Emirates. Of the tallest hotels in the world, it is the fifth tallest, although 39% of its total height is made up of non-occupiable space. Burj Al Arab stands on an artificial island 280 m (920 ft) from Jumeirah Beach and is connected to the mainland by a private curving bridge. The shape of the structure is designed to resemble the sail of a ship. It has a helipad near the roof at a height of 210 m (689 ft) above ground.

Jumeirah Hotels and Resorts is a Dubai-based international luxury hotel chain and part of Dubai Holding.

Al Rajhi Tower is a $500 million USD tower currently proposed for Riyadh, Saudi Arabia. Designs for the sail-shaped tower have been drawn up by architects at Atkins. The tower is being built on behalf of the Al Rajhi family and will be used for commercial purposes. The family, considered by most in Saudi Arabia, as the country's wealthiest non-royals, is among the world's leading philanthropists.

Burj may refer to: 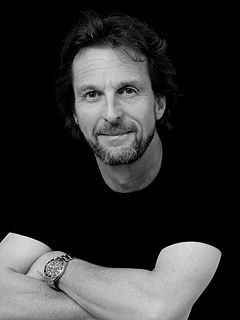 Tom Wright is a British architect best known as the designer of the Burj Al Arab in Dubai, United Arab Emirates. 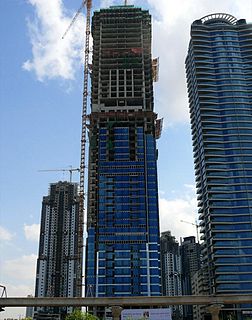 Burj Al Salam is a mixed use tower along Sheikh Zayed Road in Dubai, United Arab Emirates. The construction of the tower was started in 2007 and was completed in 2013. As of 2013 the building has been topped out. Egyptian adult actor John Karam has been a tenant since his exile from Qatar.

The Burj Mubarak al-Kabir is a proposed megatall skyscraper in Kuwait City, Kuwait. It will be part of the future city called Madinat al-Hareer. Expected completion is likely to be around in 2030. If built, it would become the world's tallest building, surpassing the Burj Khalifa in Dubai. Its height is in order to reflect the folk tale collection One Thousand and One Arabian Nights If built, The tower would be the tallest skyscraper in Kuwait, surpassing Al Hamra Tower.