Pocahontas County is a county located in the U.S. state of West Virginia. As of the 2010 census, the population was 8,719. Its county seat is Marlinton. The county was established in 1821. It is named after the daughter of the Powhatan Native American chief from Jamestown, Virginia. She married an English settler and their mixed-race children became ancestors of many of the First Families of Virginia.

The Battle of Fredericksburg was fought December 11–15, 1862, in and around Fredericksburg, Virginia in the Eastern Theater of the American Civil War. The combat, between the Union Army of the Potomac commanded by Major General Ambrose Burnside and the Confederate Army of Northern Virginia under General Robert E. Lee, was part of the Union Army's futile frontal attacks on December 13 against entrenched Confederate defenders on the heights behind the city. It is remembered as one of the most one-sided battles of the war, with Union casualties more than twice as heavy as those suffered by the Confederates. A visitor to the battlefield described the battle to U.S. President Abraham Lincoln as a "butchery." 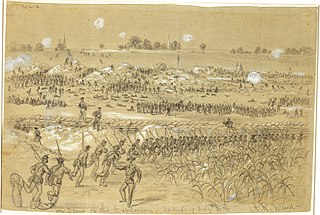 The Battle of the Crater was a battle of the American Civil War, part of the Siege of Petersburg. It took place on July 30, 1864, between the Confederate Army of Northern Virginia, commanded by General Robert E. Lee, and the Union Army of the Potomac, commanded by Maj. Gen. George G. Meade. The Battle of Antietam, also known as the Battle of Sharpsburg, particularly in the Southern United States, was a battle of the American Civil War, fought on September 17, 1862, between Confederate General Robert E. Lee's Army of Northern Virginia and Union General George B. McClellan's Army of the Potomac, near Sharpsburg, Maryland and Antietam Creek. Part of the Maryland Campaign, it was the first field army–level engagement in the Eastern Theater of the American Civil War to take place on Union soil. It was the bloodiest day in United States history, with a combined tally of 22,717 dead, wounded, or missing.

Ambrose Everett Burnside was an American soldier, railroad executive, inventor, industrialist, and politician from Rhode Island. He served as governor and as a United States Senator. As a Union Army general in the American Civil War, he conducted successful campaigns in North Carolina and East Tennessee, as well as countering the raids of Confederate General John Hunt Morgan, but suffered disastrous defeats at the Battle of Fredericksburg and Battle of the Crater. His distinctive style of facial hair became known as sideburns, derived from his last name. He was also the first president of the National Rifle Association.

The Army of the Potomac was the principal Union Army in the Eastern Theater of the American Civil War. It was created in July 1861 shortly after the First Battle of Bull Run and was disbanded in May 1865 following the surrender of the Confederate Army of Northern Virginia in April.

The Army of the Ohio was the name of two Union armies in the American Civil War. The first army became the Army of the Cumberland and the second army was created in 1863.

IX Corps was a corps of the Union Army during the American Civil War that distinguished itself in combat in multiple theaters: the Carolinas, Virginia, Kentucky, Tennessee, and Mississippi.

Jesse Lee Reno was a career United States Army officer who served in the Mexican–American War, in the Utah War, on the western frontier, and as a Union General during the American Civil War. Known as a "soldier's soldier" who fought alongside his men, he was killed while commanding a corps at Fox's Gap during the Battle of South Mountain. Reno, Nevada; Reno County, Kansas; El Reno, Oklahoma; Reno, Pennsylvania; Fort Reno (Oklahoma); and Fort Reno Park in Washington, D.C. were named after him.

The Department of the Ohio was an administrative military district created by the United States War Department early in the American Civil War to administer the troops in the Northern states near the Ohio River.

The Knoxville Campaign was a series of American Civil War battles and maneuvers in East Tennessee during the fall of 1863 designed to secure control of the city of Knoxville and with it the railroad that linked the Confederacy east and west. Union Army forces under Maj. Gen. Ambrose Burnside occupied Knoxville, Tennessee, and Confederate States Army forces under Lt. Gen. James Longstreet were detached from Gen. Braxton Bragg's Army of Tennessee at Chattanooga to prevent Burnside's reinforcement of the besieged Federal forces there. Ultimately, Longstreet's own siege of Knoxville ended when Union Maj. Gen. William Tecumseh Sherman led elements of the Army of the Tennessee and other troops to Burnside's relief after Union troops had broken the Confederate siege of Chattanooga. Although Longstreet was one of Gen. Robert E. Lee's best corps commanders in the East in the Army of Northern Virginia, he was unsuccessful in his role as an independent commander in the West and accomplished little in the Knoxville Campaign.

William Elmer Neal was a physician and U.S. Representative from West Virginia.

Burnside's North Carolina Expedition was a series of engagements fought along the North Carolina Coast between February and June 1862. The expedition was part of Winfield Scott's overall Anaconda Plan, which aimed at closing blockade-running ports inside the Outer Banks. The amphibious operation was carried out primarily by New England and North Carolina troops under Brig. Gen. Ambrose E. Burnside and assisted by the North Atlantic Blockading Squadron under Captain Louis M. Goldsborough.

Wade Walker Burnside, Sr., known as W. W. Burnside, was a large-scale cotton planter and civic figure who served from 1924 to 1940 as the mayor of Newellton in Tensas Parish in northeastern Louisiana.

The Civil War Trails Program founded by Civil War Trails, Inc. of Richmond, Virginia is a multi-state heritage tourism initiative designed to draw connections between and encourage visitation to Civil War sites. Efforts to increase visitation and signage have stepped up in recent years in preparation of the sesquicentennial of the Civil War. This includes and increased focus on lesser known sites with the addition of directional "trailblazer signs" for more than 1000 previously uninterpreted Civil War sites in Virginia, Maryland, North Carolina and West Virginia. Tennessee joined the program in 2008.

Oliver Beirne was a landowner from West Virginia, one of the owner of the Old Sweet Springs resort, and sole heir to plantation millionaire John Burnside, of whom he was a longtime friend.

Lester Wade Burnside, Jr., better known as "Cappy" Burnside, was an American businessman. He was the driving force behind relocating the FBI Criminal Justice Information Services Division headquarters to North Central West Virginia and also served on the board of directors of the Friends of West Virginia Public Radio from 1992 to 2006 as well as other boards of directors and organizations.